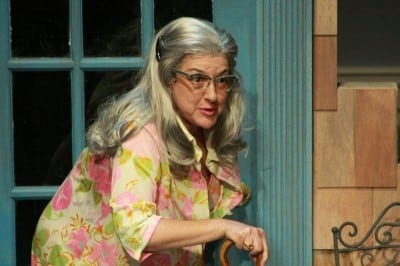 “Grey Gardens” is as campy as “Mommy Dearest” and “Whatever Happened to Baby Jane?” — and that is why it has a virtually built-in audience at Actor’s Express, where the taste runs toward gay thrillers, Tennessee Williams and smallish musicals. Based on the Maysles Brothers’ 1975 documentary about Edith Bouvier Beale; her daughter, Edie, and their Long Island house of horrors, the musical version of “Grey Gardens” has singing cat ladies, dancing cats and cat-food jokes. (A little paté, Mother Darling?)

But as I point out in my Friday AJC review, what this highly anticipated show does not have is a leading lady with enough versatility to carry back-to-back performances as Big Edie in one act and Little Edie in the next. The actress in question is Jill Hames, who seems awfully likeable but can’t muster the serpeant-under-the-flower instincts of the glamorous East Hampton socialite at the height of her whimsy. It takes more than an unfortunate wig and a certain powdered turn of the mouth to capture the tricky charms of Edith Bouvier Beale.

As the Big Edie of Act 2, Kathleen McManus  is pretty amazing. But I have trouble believing that the actresses of the first half are the same people of the second half. The show’s great themes may be the inevitability of change, decay and disorder. But really, just a little resemblance — physically, vocally, anything! — would mean a lot. Still, if the show has problems with personality, it’s got topicality. Edith Bouvier Beale was the aunt of first lady Jacqueline Kennedy, who makes an appearance in the show as a young woman in riding outfit and long pony-tail. You can already see that she’ll go far. And though it probably never happened in real life, Little Edie suffers a devastating romance with Joe Kennedy Jr. in the musical. Given the recent headlines about the deaths of Ted Kennedy and his sister Eunice, “Grey Gardens” has an art-imitating-life quality that audiences will no doubt find delicious. I gave it a B+ by the hair of Big Edie’s chin.