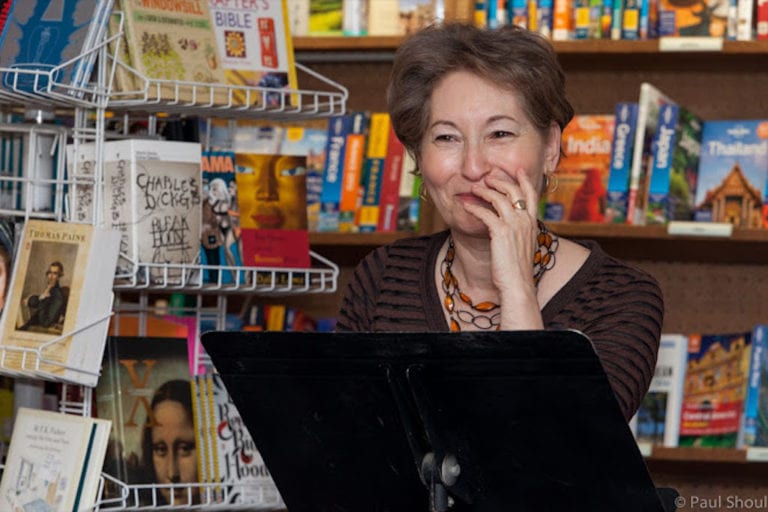 As a novelist, Elinor Lipman fashions herself the literary equivalent of a puppeteer — pulling strings to animate her protagonists and villains, setting them on collision courses and having them reconcile some new truth or understanding about themselves in the end.

“I am the god of this world, and I can do anything with my characters,” says Lipman during a phone interview from her apartment on Manhattan’s Upper West Side.

In her latest novel, Good Riddance, Lipman uses those characters to explore themes of love, loss, betrayal and family secrets from the perspective of 20-something New Yorker Daphne Maritch. Daphne tosses a yearbook bequeathed to her by her recently deceased mother, but that urge to purge quickly sparks dread when the annotated keepsake winds up in the hands of a busybody neighbor-turned-nemesis/wannabe-documentary filmmaker named Geneva Wisenkorn.

The idea for Good Riddance struck after an outing to the Stormville Airport Antique Show & Flea Market in Upstate New York, where Lipman’s beau, Jonathan Greenberg, found treasure in someone else’s trash.

“Keep in mind, he is no regular shopper,” says Lipman of Greenberg. “He is the fine art appraiser and valuator for a blue chip auction house in Manhattan. So when he came happily over with this old, smelly yearbook from Keene, New Hampshire, dated 1955, I asked why he wanted it. ‘It’s Americana!’ he said. All I could think was, ‘Well, it’s not my $12.’”

The yearbook Greenberg found had been dedicated to an English teacher who’d served as advisor on the publication. Not only did she attend class reunions religiously, but she also color-coded her running commentary in the book’s pages, documenting who was married, who was still pretty, who was plump. . . . In time, Lipman came to regard the relic as a story waiting to be told, and after adding a bit of hanky-panky to keep the narrative arc compelling, Good Riddance was born.

In advance of Lipman’s upcoming conversation and book signing with author Emily Giffin as part of A Page from the Book Festival of the MJCCA on February 13, ARTS ATL chatted with Lipman about her becoming a writer, the antique find that served as the inspiration for Good Riddance and more.

ARTS ATL: First things first. Is Jonathan Greenberg the Jonathan that readers fell in love with from your New York Times’ Modern Love essay “Taking A Break for Friendship,” and the subject of “A Fine Nomance” from your first essay collection, I Can’t Complain?

Elinor Lipman: Yes! In May, it’ll be six years that we’ve been together, and it’s been great. I would have dedicated Good Riddance to Jonathan, but I was very, very close to Anita Shreve, who died nearly a year ago on March 29, and I wanted to commemorate our friendship.

ARTS ATL: You mine themes like separation, divorce, betrayal and death in Good Riddance but also weave comedy throughout the narrative. Tell me about finding laughter in unexpected places.

Lipman: I love this question! I never try to make things funny. If I feel that I’m reaching to make a joke, I cut that line because when I read that in other people’s fiction, it feels kind of obvious or manipulative. Ironically, what I see as poignant sometimes comes across as funny to the reader, so I’m always surprised by what people find funny. I actually got my first laugh when a teacher read my first short story out loud during a writer’s workshop nearly 30 years ago . . . and I was completely intoxicated!

ARTS ATL: How did you get your start as a writer?

Lipman: I was managing editor for the Massachusetts Teachers Association magazine and newspaper when I signed up for a fiction writing workshop at Brandeis University — 10 weeks for $40. I went with great trepidation that first night, and my classmates were so advanced that I considered dropping out because I was in way over my head. The only reason I stayed is because my teacher, Arthur Edelstein, encouraged me. Plus, I’d already paid the $40 and couldn’t throw my money away! One year later, in the fall of 1980, my first short story was published in Yankee magazine. And seven years later, Viking published my first short-story collection.

ARTS ATL: In Good Riddance, the heart of the conflict between Daphne and Geneva stems from their disagreement over who has the right to tell Daphne’s mother’s story. As a writer, have you ever gotten in hot water for crossing that line with a subject?

Lipman: I have been challenged twice as a writer for telling someone else’s story. While in the Brandeis workshop, I patterned a character named Claire after the most obsequious person I knew. If you met her in the market and asked her about herself, a thank-you note would appear in the next day’s mail. It was published in Yankee magazine — which the real life Claire never saw. But when it was published in my first short-story collection, she saw it and was so furious she stopped speaking to me. Then there was my essay, “I’m Overruled,” inspired by my nephew’s wedding — which involved having to take a 10-mile hike up a mountain and white water rafting on Lake Louise in water that was 5 degrees centigrade. The bride felt it was condescending, so I made adjustments, but I think she’s still sensitive about it.

ARTS ATL: You examine loyalty from many perspectives in Good Riddance. What inspires your curiosity about the ways your characters navigate fidelity — whether romantic or filial — when the people they love disappoint them or fall short of expectations?

Lipman: “Navigate” gives me too much credit, because I don’t outline my books. It’s more like driving through the fog with just the headlights when you can’t see anything else. Kurt Vonnegut once said that when he writes he feels like an armless, legless man with a crayon in his mouth. That’s how unprepared and unarmed you are as a writer. It’s just a mess. Rather than navigate, my approach is more seat-of-the-pants. I’m always taking the pulse of the story, asking what does it need, what is it missing . . . but I remember the exact point when I was nearly finished with the book when I thought someone has to remind Daphne that [despite her conflicted feelings] she loved her mother.

ARTS ATL: You’ll be in conversation with Emily Giffin for a book talk and signing at the MJCCA on February 13. What’s one thing you look forward to doing, seeing or hearing while in Atlanta?

Lipman: Do you want me to name drop? [Laughs]

Lipman: My dear friend Beverly Daniel Tatum [former president of Spelman College] and I go way back to when our sons went to school together in Northampton, Massachusetts. I haven’t seen her since our boys graduated from high school 19 years ago, but we remain close, and I am so excited she is coming to my event!