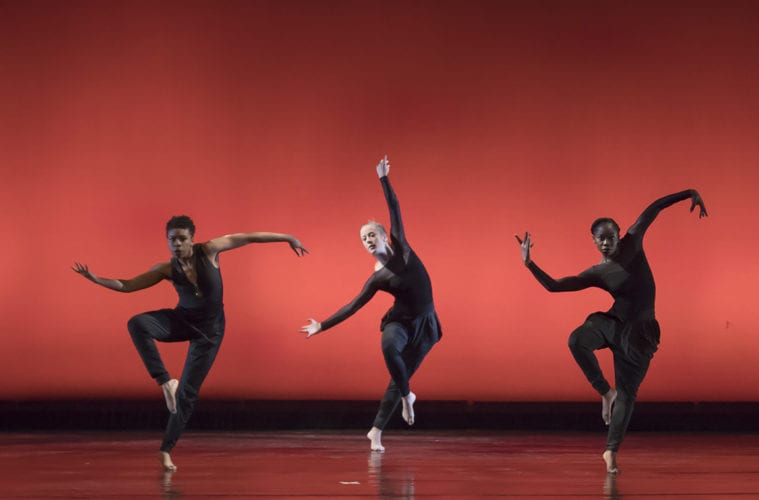 Dance Canvas will be one of the companies featured in Georgia Tech's "Skyline Series" this spring. (Photo by Richard Calmes)

Georgia Tech Arts is going live and in person for the first time in many months — on a giant outdoor stage. Aaron Shackelford, the organization’s director, has created an impressive lineup of music and contemporary dance for the Skyline Series running March 28–May 18.

The pandemic forced Shackelford to cancel his carefully planned spring 2021 season and to say goodbye to a much-anticipated event: He’d negotiated a deal with The Atlanta Opera to present The (R)evolution of Steve Jobs on campus. It was a COVID-19 casualty. In its place, he’s offering concert-starved Atlantans an opportunity to hear a variety of music and see dance in person, most of it performed by Atlanta artists.

The Skyline Series stage will be located in a parking area behind the Ferst Center for the Arts, overlooking the city. Shackelford says he was “totally and shamelessly” inspired by The Atlanta Opera’s “Big Tent” series of outdoor performances and Atlanta Ballet’s drive-in Nutcracker.

The series offers a sort of before, during and after COVID perspective on the arts at Georgia Tech. Many of the artists have ongoing relationships with the university and while the pandemic forced the cancellation of their scheduled performances, they’ll be back. Take Kaki King, for instance. The genre-busting composer, guitarist and lover of A.I. “has been a huge part of our lives,” says Shackelford. She was scheduled to make a multimedia splash at the Ferst Center last spring but the pandemic nixed that. Her April 15 performance comprises just her and a few of her most interesting guitars, an opportunity to see her talent unadorned by technology. She’ll be back with a multimedia show in October. Kaki King’s concert will feature her and her guitars; a full multimedia show is planned at the Ferst Center in the fall.

Terminus Modern Ballet Theatre has been part of New York choreographer Troy Schumacher’s residency with Georgia Tech Arts for the past year. Their collaboration Interactions|Boundaries of Identity & A.I. (May 18) meshes the fields of neuroscience and technology through movement. Skyline audiences will get a sneak peek at the work; its world premiere will happen on the Ferst stage next spring. On May 17, the Terminus Student Company will present its inaugural performance, Spring Showcase.

The Bill T. Jones/Arnie Zane Company has a rich relationship with Georgia Tech. In June 2020, Jones was one of the first artists to participate in a Georgia Tech Arts online conversation. He’ll be represented in the Skyline Series with Continuous Replay: Come Together, a work based on the late Arnie Zane’s iconic 1980s solo. Georgia native Chanel Howard, a company dancer, will develop the work with ImmerseATL, a collective of young pre-professional dance artists (April 14). The company will return to Atlanta next season with Jones’ What Problem? That, too, was a COVID casualty, originally scheduled for the Ferst last October.

On two consecutive weekends, April 30–May 2 and May 7–9, Atlanta Ballet will present its Silver Linings works, featuring Pleiades Dances, a new piece by choreographer-in-residence Claudia Schreier. Atlanta Ballet 2 will dance a mixed bill titled On the Horizon on April 23–25.

Dance Canvas was primed for its annual choreographers’ showcase at the Ferst last March. Shackelford says he felt strongly that it should have a spot in the Skyline Series, so two mixed bills are scheduled for May 15–16.

The series’ musical offerings range from the sounds of Dolly Parton to Black social commentator Michael Mwenso. His Hope, Resist & Heal will kick off the series Sunday, performed by his Harlem-based group, Mwenso and the Shakes. His perspective on Black music and its ability to heal has been described by jazz singer Brianna Thomas as “theater meets opera meets James Brown meets jazz meets total improvisation.” On April 9, ATL Collective will bring local singers together to relive and interpret Parton’s iconic album Jolene. The Georgia Tech School of Music is offering free concerts April 16–20, ranging from jazz to new music, classical, rock/pop and choral. Aaron Shackelford had to shut down his ambitious spring season because of COVID-19 and opted to stage an outdoor series in its place.

The Skyline Series speaks to the moment. It demonstrates the determination of Atlanta arts leaders — in this case Shackelford — to nurture and support Atlanta’s music and dance artists during these unprecedented times. Dancers get to dance, musicians get to make music and audiences get to enjoy them on balmy spring evenings. The university has even installed grass in the seating area to create a summer festival vibe.

Unlike recent Atlanta Opera performances, there won’t be a tent. If it rains, shows will be canceled or rescheduled. “We have all had to adjust our expectations,” Shackelford says. “It’s a gamble, but a worthwhile gamble in order to have art.” He made sure every unexpected detail was attended to, including getting a power line taken down so a row of Atlanta’s streetlights could be turned off: They would have interfered with the stage lighting.

Tickets are available in pods of two or four; each performance will be an hour or less, without intermission, and maintain social distancing. Masks are required. Pricing starts at $50 for double-pod seating and $100 for a four-person pod. Georgia Tech students get discounted tickets. Parking will be in the deck off State Street.

A few evenings are still open if artists want to present. “There is very little performance space in Atlanta right now, but we have the stage,” says Shackelford. “Part of the ethos of Georgia Tech has been to be a leader and resource in the city.”

Georgia Tech Arts did a few streamed events in 2020, but launching a video production unit was never its goal. In fact, its first online event was surprisingly low tech for a high-tech university. “We didn’t even have a video camera,” Shackelford says. “My laptop was the big technological secret for that event.”

Now it has a camera, and a virtual studio backstage at the Ferst, but Shackelford is sticking to the organization’s primary mission: integrating the arts into students’ experiences on campus, encouraging innovation and collaboration, and inviting audiences to enjoy the results. This spring, once again, the results will be live and in person.