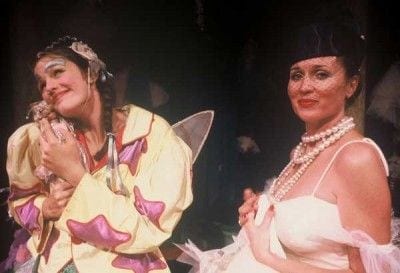 Editor’s Note: We’re pleased to announce that Wendell Brock will join Steve Murray covering theater for artscriticATL. Wendell was the AJC’s chief drama critic from 2001 until he left the paper last month, and for this site he’ll contribute original reporting, features and reviews. Like Cathy and Pierre, he’ll also still write freelance pieces for the AJC, and we’ll link to them. You can reach us at artscriticATL [at] gmail [dot] com. — Pierre

Georgia Shakespeare opened its 24th season over the weekend with a smartly conceived production of “A Midsummer Night’s Dream.” During the curtain call, Chris Kayser — who plays Nick Bottom, the asinine and accidental lover of Queen Titania — was given a special award for his 20 years of service to the company.

I give Kayser (seated, with bucket on his head) a glowing review for his performance in today’s AJC. Like Kenny Leon and Rosemary Newcott, Kayser is a product of the Frank Wittow days of the Academy Theatre and regularly plays Scrooge in the Alliance Theatre’s “Christmas Carol.” An interesting guy: he has a degree in French from Georgia State University and has been quoted saying he is “allergic to boredom.”

Last year’s Georgia Shakespeare’s 20-year honor, by the way, went to Brad Sherrill. This season, Sherrill was to portray Theseus and Oberon, but he was replaced at the last minute by Mark Kincaid. Sherrill is suffering from an ongoing back injury.