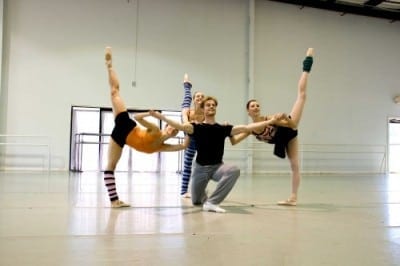 Watching the Georgia Ballet rehearse George Balanchine’s “Who Cares?,” there’s no question you’re watching young professional dancers at work. It’s apparent from their lithe, taut bodies wrapped in colorful knits and chiffon, the pointe shoes, the glow of perspiration, the unswerving focus and controlled exertion levels that burst and subside on cue, the atmosphere charged with a hunger to learn and a thrill at what they’re learning. But just listening to répétiteur Philip Neal, you’d think you were in rehearsal for “A Chorus Line.”

As he gives directions, each beat a syllable of a ballet term, it becomes clear how Balanchine extended the classical ballet language, largely by rearranging traditional steps to syncopated rhythms.

Set to songs by George Gershwin, “Who Cares?” will headline “Rhythm and Rhapsody,” the Georgia Ballet’s main performance event of the season. Also on the program will be Janusz Mazon’s “Prelude Pictures,” offering a different take on Gershwin, and “Aurora’s Wedding,” from the 19th-century Russian classic “The Sleeping Beauty,” to Tchaikovsky’s music. The program will run this Saturday and Sunday at the Cobb County Civic Center’s Jennie T. Anderson Theater. Click here for tickets.

Neal, in a classic white T-shirt, his long legs in black jazz pants, moves with the rhythmic agility of a tap dancer but with the clean-lined vigor of a dancer who has spent his performing career with the New York City Ballet. Neal retired last year as principal dancer, and the Balanchine Trust quickly snapped him up. He’s one of a younger generation of Balanchine Trust répétiteurs responsible for restaging works by one of the 20th century’s most influential choreographers. A trained jazz and tap dancer before he became serious about ballet, Neal has danced as the Hoofer in Balanchine’s “Slaughter on Tenth Avenue” and all manner of princely roles. But the jazzy, soft-shoe rhythms of “Who Cares?” are close to his heart.

As dancers Mara Mandradjieff and Phillip Skaggs rehearse, every sequence of steps has to be carefully learned and practiced, as Gershwin’s syncopated rhythms make steps much faster, with unusual accents and quick changes of direction. Together, the pair weave through interlacing balances and twirls.

“TUM ta dum ta dum PUM pah yahhh.” Mandradjieff breaks away from Scaggs with a perky hop that spills into pattering grapevine steps, a couple of sassy turned-in step-over-steps; a breezy chug quickly switches back with a kick-and-cut-under ballonné. Neal offers tips on how to relax the body’s weight into the floor on certain beats, the opposite of the “pulled up” way that ballet dancers usually work. “Think soft shoe,” he advises. “It’s not like you’re a ballerina.”

Mandradjieff works out a series of scissoring ball-changes and forward-back tilts of the pelvis from an open lunge. For a ballet dancer trained to maintain the body in vertical alignment, this requires some undoing. “Think ‘Dancing With the Stars,’” urges Neal.

Mandradjieff loosens up a little, bringing a sense of cheeky showmanship to the steps, though they’re still elegant and long-limbed.

Balanchine choreographed “Who Cares?” in 1970, but the 40-minute, plotless work harks back to his early years as a young choreographer with Diaghilev’s Ballets Russes, when Gershwin was popular in Europe. Later, while Balanchine was choreographing movies and Broadway shows in the United States, he started working with Gershwin on Samuel Goldwyn’s “Follies” in 1937, but the collaboration was cut short when the composer succumbed to a brain tumor. Years later, Balanchine chose 16 of Gershwin’s songs from a book the composer had given him, including “My One and Only,” “‘S’ Wonderful” and “I Got Rhythm.”

“He loved Fred Astaire and Ginger Rogers, soft shoe,” Neal said of Balanchine. “He was embracing New York City and America as his home, but he mixed it with his [Russian] Petipa heritage.” Costume designer Karinska brought out dancers’ balletic qualities but infused them with flashy Broadway style. Colorful scenery suggested the Manhattan skyline in silhouette.

“Who Cares?” will be the fourth Balanchine work the Georgia Ballet has performed in the past five years. It reflects the unusually high standards that the relatively small company maintains under Gina Hyatt-Mazon’s and Janusz Mazon’s artistic leadership, in the tradition of the Hamburg Ballet, where they spent much of their performing careers. It’s a wise investment for the troupe, the only one in town that has performed this master choreographer’s works. That’s surprising, because most of Balanchine’s works that are still in production are timeless ballets, ingeniously constructed and historically significant. And they challenge dancers to acquire the rhythm, speed and musicality they need to perform today’s contemporary works.

“This is technically a big step up for them,” Neal said. “It’s hard to get them to understand — not just them, anyone — that although this is jazzy and it’s Gershwin and it’s loose, you still have to respect the classical vernacular. It’s not all style and no substance. But they were ready for me, guns ablaze the first day.”

These days, younger, smaller companies such as the Georgia Ballet, as well as schools and conservatories, are eager to perform Balanchine repertoire, said Ellen Sorrin, director of the Balanchine Trust. The number of the choreographer’s works in production around the world hasn’t changed, she said. But more former NYCB dancers are now teaching, and they want these ballets for their students. “The training prepares them for almost everything.”

Balanchine’s abstract ballets help build dancers’ skills for works by currently voguish choreographers such as Christopher Wheeldon, Alexei Ratmansky and Jorma Elo. Neal explained that those dance-makers also work primarily in the abstract: like Balanchine, their non-narrative works deal mostly with pure movement and its relation to music. As such, details become more apparent and meaningful than in narrative ballets. Neal repeated the oft-heard quote, “The gesture of how you present your foot has to tell a story.”

Back in rehearsal, he teaches three women and one male dancer a final tableau. The women strike arabesques, gesturing graciously toward the man in the center. It’s a bit like the three muses in Balanchine’s 1928 “Apollo,” and that’s the intent. Dance critic Arlene Croce wrote of this part, “The allusion to 1928 … reverberates with ‘Apollo’s’ own recapitulations of the Nineties and Marius Petipa — high noon at the Maryinsky — and so we are borne back ceaselessly into the past.” Neal relates to me what dancer Jacques D’Amboise passed on to him: “Yes, you’re Apollo, but you’re on Broadway.”