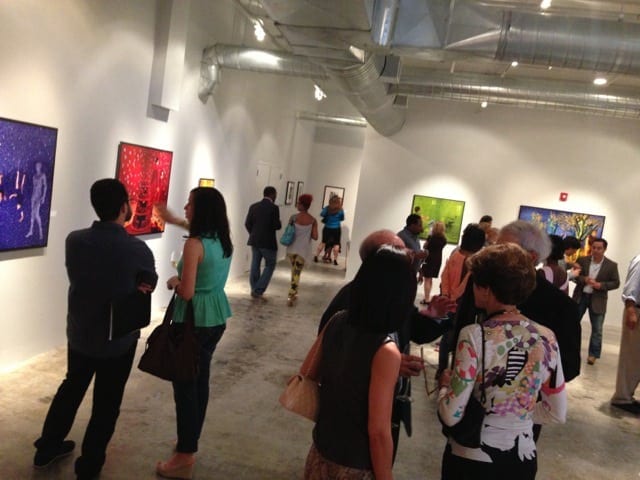 Atlanta artist HENSE painted this mural on the facade of the new Westside Cultural Arts Center.

On June 27, Fay Gold held court at the opening of her long-awaited art gallery in the new Westside Cultural Arts Center on West 10th Street. The distinguished 81-year-old dealer has been working as an art adviser since closing her previous gallery in 2009, after three decades in the business. Shuttering her Buckhead gallery “was like getting a divorce,” says Gold, while the new space “is like getting remarried four years later: it’s the same but different.” She was invited by James Chappuis, a surgeon who has owned the 12,500-square-foot building for more than 10 years, to run a gallery in the facility, giving her about 8,000 square feet to do with as she wished. Chappuis intends to host a range of events there — jazz performances, lectures, receptions — all of which could increase the exposure of artists to viewers who might not otherwise visit a gallery. And not many galleries come with a built-in reception area and bar.

Gold inaugurated the space with photographs by Sandy Skoglund (on view through August 30), an artist best known in the late 1980s and 1990s for her room-size installations. Skoglund, who has shown with Gold since 1999, made new prints of previous works for the occasion.

Accordingly, the show felt rehashed, but to her credit Gold pulled it together with four weeks’ notice. She had earlier planned to open with the “50 Americans” exhibition of Robert Mapplethorpe photographs organized by Sean Kelly Gallery (how perfect the timing would have been with the Supreme Court’s recent striking down of the Defense of Marriage Act), but long delays caused by building permit issues proved problematic. Gold, who has represented Mapplethorpe or his estate since 1982, expects to present that or another show of the artist’s work, as well as one by Keith Haring, in the near future. For now, her storage racks are mostly empty, and a handful of artists have works installed in the back room.

When Gold opened her first gallery in 1980, she showed such artists as George Segal, Robert Rauschenberg, Alex Katz and Irving Penn. She says she’ll continue “to bring to Atlanta what no one else can” and is also scouting around for emerging talent, since her former artists have moved on to other galleries. So far, she’s discovered and has already sold works by Savannah College of Art and Design MFA candidate Tyrus Lytton; Taras Sereda, a 22-year-old Ukrainian artist based in New York; and Atlantan J.P. McChesney. Lloyd Benjamin is moving Get This! Gallery into Nancy Solomon’s former gallery. (Photo by Terry Kearns)

Meanwhile, as Gold arrives on the West Side, Get This! Gallery is decamping from the West Side to the former Solomon Projects space on Monroe Drive. Lloyd Benjamin, the owner, cites myriad reasons for the move, including rising rent. “Since Saltworks closed its space, I’ve felt like a stand-alone gallery,” he says, referring to his former neighboring gallery.

It didn’t help when he found out that a hair salon will be opening next door to his current 11th Street location. Even though the West Side is gaining momentum as an arts district, Benjamin says he wasn’t close enough to its center to attract foot traffic, which he expects to get more of in the more walkable Monroe Drive location near Piedmont Park and the Atlanta BeltLine.

“Nancy Solomon has been a mentor of mine for a long time,” the artist and dealer says of his former dealer (he had a show with her in 2010). She owns the building that housed her gallery, and when Benjamin found out it was available, he “jumped at a great opportunity,” he says.

The new venue will afford him about 2,000 square feet of exhibition space, more than doubling what he now has. His gallery now also houses his framing business, which will be sited elsewhere with the move.

With the additional space, Benjamin plans to expand his programming. He’ll show riskier projects alongside sellable work, by both emerging and established artists, and will be able to mount dual solo shows.

He’ll kick off the new space August 24 with large-scale sculptures by Drew Conrad. Two solo shows, by Matthew Craven and Bean Worley, will be on view from October 19 through the end of November. The gallery will be closed in December, giving Gyun Hur a month to install her show, scheduled to open January 4.

Benjamin is also dabbling in the secondary art market, which should enhance his bottom line. He’ll be partnering with former Atlanta art dealer Skot Foreman, who shuttles among New York, Atlanta and San Miguel de Allende, Mexico. The two were neighbors in Castleberry Hill when Benjamin first opened his gallery there before moving to the West Side five years ago. “AMW / BR / HK,” the final show at Get This! in its West Side location, features Andy Moon Wilson, Ben Roosevelt and Harrison Keys, artists who are included in the High Museum’s current “Drawing Inside the Perimeter.” Saltworks’ pop-up show. The painting at left is by Craig Drennen.

Dealer Brian Holcombe of Saltworks has taken advantage of an all-too-rare marketing opportunity to piggyback on the High Museum of Art’s exhibition of Atlanta artists. His pop-up gallery in theWhite Provisions building features the four artists in his stable — Jiha Moon, Alejandro Aguilera, Brian Dettmer and Craig Drennen — who are in the High show.

It’s been an energizing week for the Atlanta visual arts scene. One hopes it’s a sign of better days ahead.