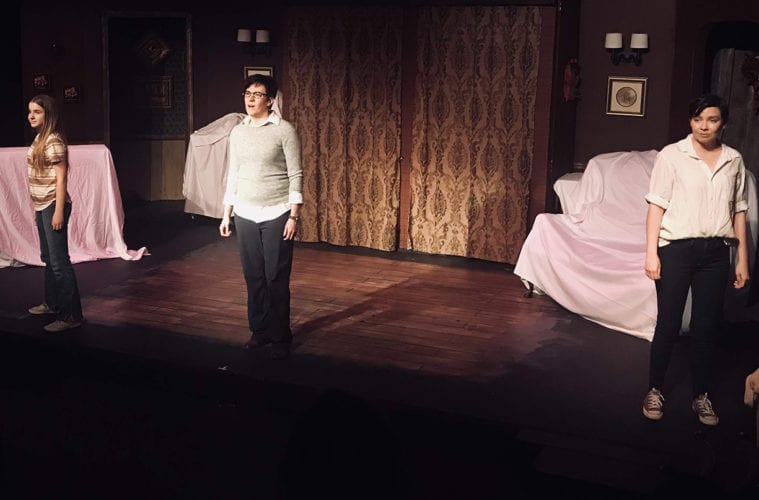 The Alisons (from left to right): Celia Reed, Emily Kalat and Ashley Prince (Photo courtesy of Out of Box Theatre)

The Tony Award-winning musical Fun Home, based on lesbian cartoonist Alison Bechdel’s autobiographical graphic novel, is a challenging feat for any theater to produce. Its score and subject matter require highly skilled singer-actors, and its cast of nine calls for three children. It is, perhaps, the kind of work we’d more commonly see at Actor’s Express or the Alliance Theatre. In choosing Fun Home, running through February 23, Out of Box Theatre pushes its resources to the limit, only occasionally reaching pay dirt.

Although the Marietta company gets props for being the first in Georgia to stage the piece, the material (music by Jeanine Tesori, book and lyrics by Lisa Kron) demands and deserves better.

Fun Home unfolds in scenes that flow back and forth in time and in the lives of the Bechdel family: Alison (played at various ages by three actors), brothers John and Christian and parents Bruce and Helen. The Bechdel house is more museum piece than home, running on the premise that “chaos never happens if it’s never seen.”

Adult Alison (Emily Kalat), an accomplished graphic novelist, is trying to make sense of her formative years and her father’s suicide (no spoiler here; we learn of it early on). Small Alison is nine years old, likes to play airplane and does not like dresses. Medium Alison, at 19, is away at college and discovering her sexual self.

Celia Reed may be a bit too old to play Small Alison, but she can sing and dance and wades adeptly into all the tragic, comic and confusing aspects of her young life. Ashley Prince as Medium Alison is all wide-eyed wonder and enthusiasm in her big number, “Changing My Major” (although her dorm-room bed is uncomfortably tiny, even by student-housing standards).

Bruce Bechdel (Stephen DeVillers) is a high school English teacher and an avid historic home restorationist and is in charge of the family funeral home, hence the “fun home” of the title. He’s also a closeted gay man, prone to fits of temper and affairs with younger men. DeVillers plays Bruce as more lecherous and leering than conflicted. An ill-fitting costume doesn’t help.

Along with Reed, the younger actors give the better performances. Micah Parness (as John) and Alex Huff (as Christian) are charmingly at ease as they bop and rap in “Come to the Fun Home,” the trio’s would-be commercial for the family business, and in “Raincoat of Love,” a Partridge Family knockoff. MK Penley as Helen, Abby Holland as Joan and Jacob Valleroy in several roles complete the cast.

Out of Box’s snug space makes its Home less fun and feeling cramped. The show is best performed in an intimate setting, but there is such a thing as too small. Here, the actors are so close to the audience that group numbers become muddled or overly loud.

Director Matthew Busch stations adult Alison and her drawing table in a front corner of the stage, practically in the laps of front-row patrons. He keeps her on the move as she observes, comments on and takes part in the action unfolding onstage. The storytelling suffers as she bobs and weaves and makes her way upstage, downstage and from one side to the other. The rudimentary set, designed by Angela Short, forces Busch to rely on the center aisle for so many entrances and exits through the audience that it starts to buzz like a freeway.

If only he could achieve more consistently the ache, amazement and catharsis in Bruce’s final moments or in the Alisons’ (yes, plural) finale, “Flying Away.”

Fun Home is both personal and universal. We may not have had as much drama in our lives as Alison did, but we’ve certainly all had parent issues and feelings of inadequacy or of being the odd person out. This musical is full of beautiful moments and songs — especially “Welcome to Our House on Maple Avenue,” “Ring of Keys” and “Days and Days.” Hopefully, Atlanta audiences haven’t heard the last of them. It’s unfortunate, ultimately, that Out of Box’s Fun Home doesn’t fly nearly as high as Alison’s imaginary airplane.