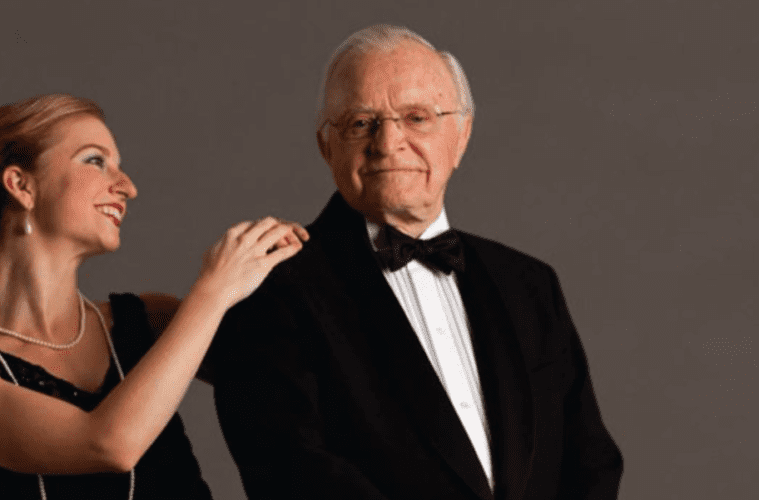 As the hours tick by, Barnett shows no signs of fatigue while roaming the studio — gently making adjustments and sharing insights on how to make monumental effort look not only graceful but effortless. In return, the youngsters’ eagerness to please their elder is evident in their bright eyes, unwavering attention, upright postures and invariably shy smiles whenever they break new ground or exceed their own expectations.

“You have to be on your legs,” Barnett says to one ballerina. “The standing leg makes it easy to be decorative with the working leg. If you’re not strong on one, the other doesn’t work.” After one male dancer executes a rapid-fire combination across the floor, Barnett says, “You may travel by going out, but you must first think of going up to get there so your whole body goes with you.”

The intergenerational exchange is as sublime as a pas de deux and, to the delight of thousands of dancers, a decades-old tradition in Atlanta.

“It doesn’t surprise me that Bobby is teaching at the age of 94,” says Maniya Barredo, founder of  Metropolitan Ballet. “He is the same teacher he was when I had him as a principal dancer with Atlanta Ballet [from 1977 to 1997].”

With the recent publication of his memoir, On Stage at the Ballet: My Life as Dancer and Artistic Director (McFarland, 2019, and cowritten with Cynthia Crain), Barnett remembers the highs and lows of his professional journey, and shakes his head at the impossibility of it all.

“I didn’t think about it at the time, but my career was pretty unique,” he says. “I grew up on a ranch in Washington state where my parents were homesteaders and my dad raised quarter-horses and Hereford cattle. We had no electricity or running water until I was in junior high school, and there was no entrée to the arts.” The Golden Age of movie musicals ignited his imagination. He idolized Fred Astaire and dreamed of becoming a dancer early on — with the complete support of his parents. Getting to Hollywood from the Pacific Northwest, however, seemed like a pipe dream for the youngest of three children until he joined the Navy in 1943, following high school graduation, to serve during World War II.

While on liberty in Los Angeles, Barnett attended an American Ballet Theatre performance of Giselle that featured Jerome Robbins, Nora Kaye, Alicia Alonso and Igor Youskevitch on tour with the company.

“The magic of it was like nothing I’d ever seen before,” says Barnett. “I died and went to heaven that night.”

By the end of the war, Barnett was deployed in the South Pacific and crossed paths with Michio Itō, a pioneer of modern dance who had been interned at a concentration camp in New Mexico in 1941 before being repatriated to Japan as part of a prisoner exchange two years later. Once there, Itō was hired by the United States Army as director of the old Takarazuka Theater in Tokyo to produce musical revues for U.S. occupation troops — where he cast Barnett in several productions.

The unlikely collaboration came to a close when Barnett’s military tour ended, but Itō encouraged him to make the most of his talents when he returned to civilian life.

Barnett heeded the advice, and by August of 1946, he was taking 12 classes a week with Bronislava Nijinska at her studio in West Hollywood, courtesy of the G.I. Bill. Nijinska was the sister of Vaslav Nijinsky, a landmark figure in Russian ballet, and she became one of the leading ballet teachers and a choreographer in America after World War II.

“Bronislava taught ballet and tap, but beyond the steps she gave us classes on acting, character development, music theory and French,” says Barnett. “For me, it was a little academy and she was a magical teacher. When I left, I could do sixteen pirouettes and stop in half pointe with no problem.” Barnett executes an arabesque in Los Angeles under the tutelage of Bronislava Nijinska.

Barnett’s natural gifts included his turnout, musicality and agility; Nijinska maximized his ability to jump, turn and change directions easily by drilling the fundamentals of placement. She was also a disciplinarian steeped in Russian ballet traditions who had zero tolerance for less-than-perfect comportment in her presence. To this day, Barnett recalls the dressing down his classmate Marjorie Tallchief (who later became the first Native American “première danseuse étoile” in the Paris Opera Ballet) took for slouching at the barre. The offense was her first and last, he says, because “not being pulled up, or hanging on the barre, you just didn’t do that in Bronislava’s class.”

By 1949, Barnett was a protégé of Balanchine and Jerome Robbins at the New York City Ballet. Temperamental opposites, Balanchine was soft-spoken and introspective, whereas Robbins’ volatility and quick temper could be “emotionally and physically devastating to his dancers,” according to Barnett. But Barnett absorbed the best each man had to offer, and routinely volunteered for technical rehearsals just to observe how the master lighting designer, Jean Rosenthal, lit everything from scenic backdrops to the underskirts of tutus.

Nine years later, Barnett joined the Atlanta Civic Ballet (renamed Atlanta Ballet in 1967) as principal dancer at the invitation of Dorothy Alexander, who founded the company.

He married Virginia “Ginger” Rich, who also danced at New York City Ballet and was the daughter of the founder of Atlanta’s Rich’s Department Store chain, and she joined him in Atlanta as the ballet’s principal dancer and associate director. Together, they became a force in local dance. “Dorothy took the training of dancers so seriously,” says Barnett. “She studied kinesiology, understood every muscle and knew what made the body work. When you heard me talk about how the port de bras must originate from the back this morning, that’s all from Dorothy. I never knew anybody who taught it better.”

Anne Burton Avery, who was 15 years old when she partnered with Barnett in Atlanta Ballet’s The Nutcracker, might argue that last point. As the beneficiary of his guidance at the start of her professional career, she had a unique vantage point onto the technical prowess, mastery of the academics and sheer instinct that made it impossible for audiences to take their eyes off Barnett in performance.

“Bobby’s timing was flawless,” says Burton Avery. “His jumps were so high and beats so sharp. He was in the moment, projecting the story or character. He coached me in the skills of classical ballet while partnering in the studio, then inspired me on stage. But technique was secondary because Bobby was always such a gentleman. He was so gallant, giving, calm, charming and charismatic in real life that it came across on stage. Dancing the Sugarplum Fairy to his Cavalier made me feel so alive and sparkly!” Barnett as Candy Cane in “The Nutcracker”

Barnett’s memories of his introduction to The Nutcracker are equally vivid if not as sparkly.

“I was cast to dance the role of the Candy Cane [to the same choreography Balanchine had danced at the Mariinsky Theatre in Saint Petersburg, Russia] when the ballet premiered in New York,” says Barnett. “Jumping through that damn hoop at breakneck speed was not easy. I was trying to do it academically when Mr. B said, ‘Bobby, you just have to attack it . . . make it happen.’”

Barnett still takes pride in recalling the maestro’s post-performance remark that, “Nobody’s ever danced it like you did!”

Barnett’s indebtedness to Balanchine as a virtuoso dancer, pianist, conductor and mentor is unqualified. He weeps openly when considering the singular genius of a man who choreographed over 200 ballets, and considers it a desecration when masterworks like Serenade are mounted with no consideration for the integrity and nuance of the original choreography. By working with the George Balanchine Foundation Video Archives, Barnett is helping to preserve the integrity of ballets he once danced and rehearsed with Balanchine, including Stars and Stripes and Symphony in C.

“All you have to do is do is his choreography and the ballet does itself,” says Barnett. “People who never worked with Mr. B tend to push too hard or they’re too frontal.”

Not so for students like Rachel Van Buskirk, cofounder of Atlanta’s Terminus Modern Ballet Theatre. As one of hundreds of dancers who have benefited from Barnett’s instruction, she can claim one degree of separation from Balanchine himself. “I’ve had the privilege to work with Bobby as a student, a professional and as his rehearsal assistant,” says Van Buskirk. “My favorite memory is rehearsing Serenade, and he was dancing it alongside me, stepping in for absent ballerinas without blinking an eye so I could be properly prepared. Bobby has an ability to shift the energy of a room; he carries himself with such calm, openness, and fun that it is impossible not to feel his effect.”

The lines between Barnett’s private life and his life’s calling are so blurred that he often jokes, “I have two sons, three grandsons and a million girls.” He is highly sensitive to the sensibilities of all emerging artists, saying, “Dancers, especially the talented ones, are very fragile.” Which is why he was so dismayed by Good Morning America correspondent Lara Spencer’s recent implication that the ballet is no place for boys.

“What a shame, given her position, that she’s so uneducated and would make a comment like that,” says Barnett. “My first impression was, ‘Lady, we’re beyond this. You need to get a life and realize what you’ve done.’ But after seeing her interview with Robbie Fairchild, Fabrice Calmels and Travis Wall — which made me so proud to be a dancer — I think Lara Spencer did male dancers a service, especially young male dancers, by apologizing on a national stage.”

There’s no telling where male dancers like Christian Clark might be today absent Barnett’s influence. Clark, another cofounder of Terminus, says meeting Barnett at the age of eight when he auditioned for Atlanta Ballet’s Nutcracker was a major turning point in his young life. Clark joined the Atlanta School of Ballet the following year and fell under Barnett’s tutelage. “Bobby is one of the sweetest and most endearing people on this planet,” Clark says. “When I think of him, the word that comes to mind is harmony. He is a gentle soul, while also being strong as a rock. As a ballet teacher and mentor, he has the rare gift of being both your critic and your biggest champion.”

But more than that, Clark says Barnett sparked and fed his love for dance. “A single ballet class with Bobby is all it takes to imbue a love for dance,” he says. “He has done so much to further so many people’s lives and careers. Dance lives in Atlanta because of Bobby.”

And Barnett continues to breathe life into local dance. On this day, as he works with the next generation of dancers at the Metropolitan Ballet, nothing escapes his attention — neither the science nor the artistry of dance.

He is exacting in his requirements. His most outstanding characteristics are his sense of humor and tender touch. He is soft-spoken and prefaces most corrections with terms of endearment like “sweetheart” or “honey.” Over the course of four hours, he rarely repeats himself with the exception of three mantras: