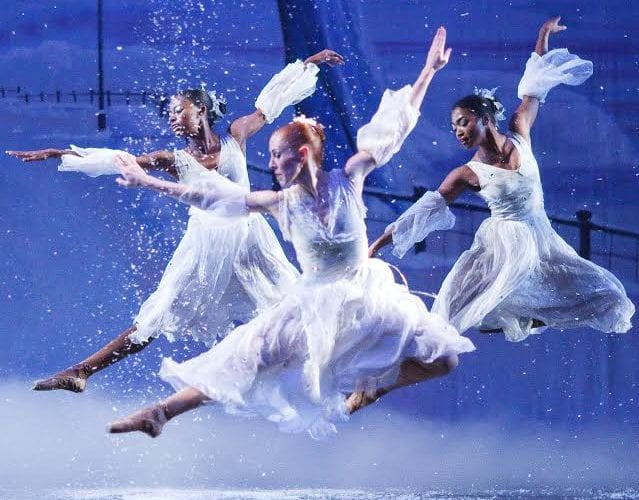 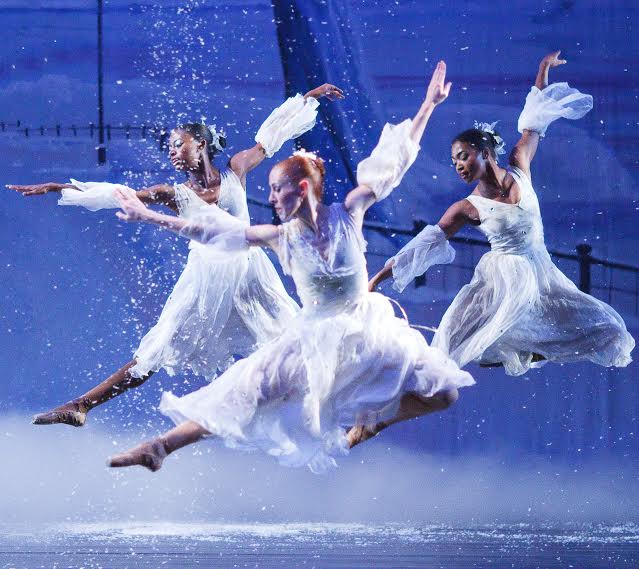 (Editor’s note: As East Point’s Ballethnic Dance Company celebrates its 25th year and prepares for its annual production of the Urban Nutcracker November 19-22, Cynthia Bond Perry takes an in-depth look at the company and its founders, Waverly Lucas and Nena Gilreath, in this three-part series. Part two looks at the founding of Ballethnic; read part one here.)

II: “If you don’t stand for something, you’ll fall for anything.”

Nena Gilreath and Waverly Lucas arrived at the Atlanta Ballet’s headquarters at Peachtree and Pine streets in the fall of 1988, where Gilreath had a new job as a company dancer. Lucas took classes, and Bobby Barnett, artistic director of the ballet, soon also offered him a job.

As Atlanta Ballet’s season got underway, the pair of self-described “studio urchins” stayed late most days to practice and choreograph. One afternoon, as dancers lingered after rehearsal, Mannie Rowe, who’d been teaching the second company, said, “Nena, you have a great little body for Sugar Plum. Why haven’t you…?”

“I haven’t had the opportunity,” Gilreath interjected.

Rowe and Nicolas Pacaña coached the couple in their first principal roles, which they danced that year as guest artists in the Houston Civic Ballet’s Inner City Nutcracker. The response was overwhelmingly positive. And though they didn’t know it at the time, this classic pas de deux would provide the foundation for the sweet centerpiece of a signature Ballethnic work. 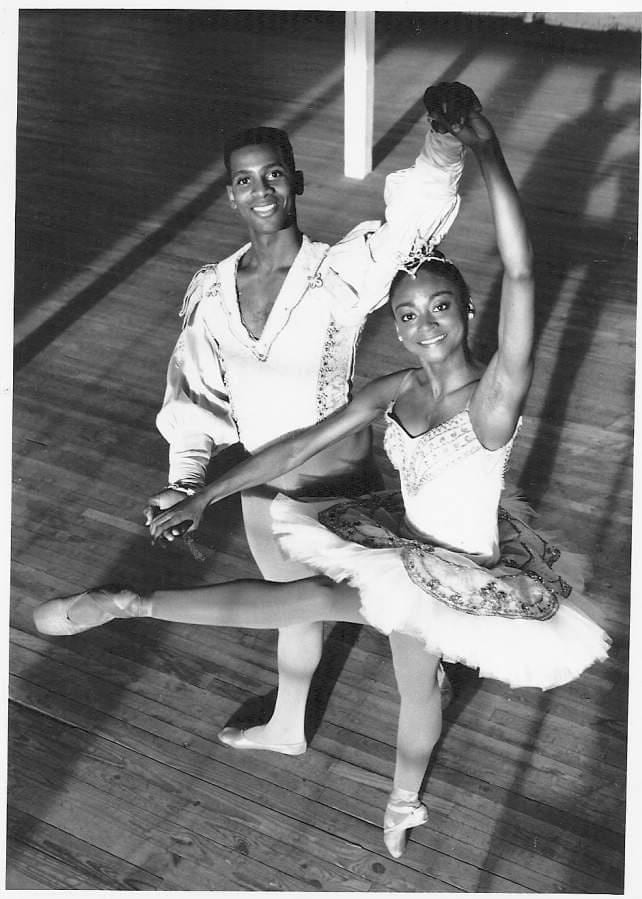 Gilreath was surprised by the response — and even more so, when dance studios in mostly-black communities began to invite Gilreath to teach. Again and again, she heard a similar story: kids sat in the audience wishing they could dance in The Nutcracker, but most of them didn’t have a chance.

At the time, a child had to be enrolled in Atlanta Ballet’s school in order to be cast in the production. Few African-American children were there, partly because it was expensive and, Gilreath said, many perceived that they were not welcome. She recognized another opportunity she had wanted — to be a mentor and role model, and to make a difference in young people’s lives.

Barnett asked Gilreath to stay another season, promising her a lead role in a new commission from noted choreographer Louis Johnson — but she politely declined. Lucas, an in-demand male dancer with strong partnering skills, had begun to pursue other opportunities. Gilreath had seen the power of her talents to encourage and help others; she felt inspired to go in a different direction. In keeping with the outreach work they had done with Atlanta Ballet, Gilreath and Lucas wanted to bring professional ballet to black Atlanta. The idea for Ballethnic was beginning to form.

Barnett told everyone the pair had his full support. “Whatever these kids want, let them use what we have,” Barnett told Atlanta Ballet President Ken Hertz. “Give them what they need, even costumes.”

Over the summer, Gilreath and Lucas landed a job with Heartstrings, a national AIDS benefit tour. One September evening after rehearsal, they had dinner with Louis Johnson while he was in town to discuss his piece for the Atlanta Ballet. They met at Mick’s, a popular restaurant across the street from Crawford Long Hospital, and were joined by Johnson’s friend Richard Long, an influential Emory University professor.

“We feel Atlanta is a great place to start a professional African-American classical company, like DTH, but with its own identity,” Gilreath told them. The company would perform repertory from a classical base, but would embrace African, modern and jazz dance styles — in other words, dance culture of the South. 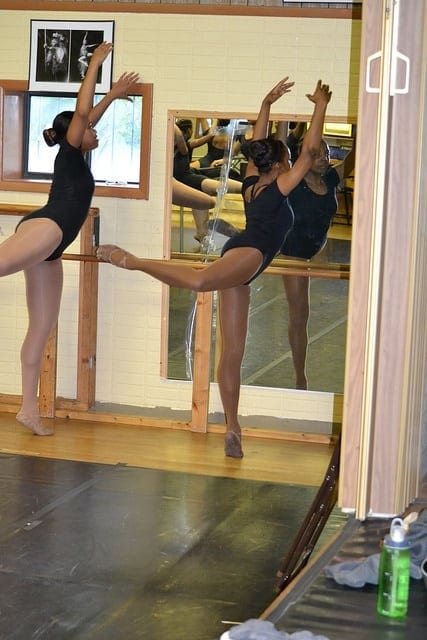 The two 25-year-olds encouraged Johnson to start a company in Atlanta. “Don’t you want to get out of New York? You should come and start a company here,” they said. “You see there’s a real need, and we’ll dance for free.”

“But we don’t know anything about starting a company,” said Gilreath.

If Johnson sent the pair in the right direction, Heartstrings’ 35-city tour gave them the tools to do it. Mannie Rowe’s duet, “Somewhere Out There” required them to keep up their technique and partnering skills. They sought out local studios for space to practice. They taught classes to the other cast members and learned the logistics of touring.

After performances, people came to them in tears. “I never knew I could see ballet and feel this way,” they would say. As the bus began breaking down and the tour began to fall apart, the two realized they had the talent and the tools to build a company and establish a home in Atlanta.

On returning, Gilreath and Lucas took their idea for a culturally diverse classical ballet company to Mozel Spriggs, a professor at Spelman College. Spriggs was an avid and dedicated supporter of dance in Atlanta. Every year, she brought to the city major forces in African-American concert dance: dance pioneer Pearl Primus, Dance Theatre of Harlem, the Alvin Ailey American Dance Theater and others.

Spriggs loved the idea for Atlanta to have its own African-American company and gave them her total support — including rehearsal space at Spelman. Spriggs invited dance pioneer Pearl Primus to coach the young dancers and connected them with Judith Jamison, artistic director of the Alvin Ailey company. 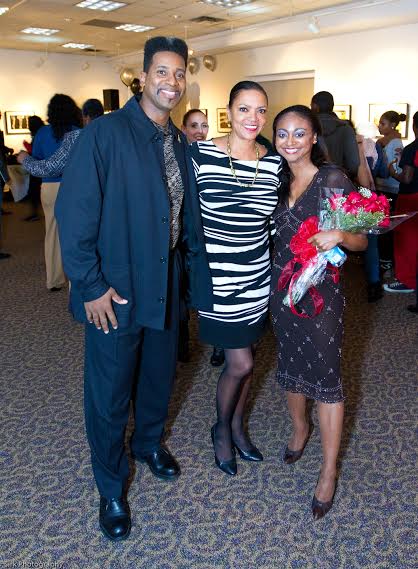 Lucas (left) and Gilreath (right) with Lydia Mitchell, the first ballerina of the Dance Theatre of Harlem.

But Gilreath remembers that not everyone was as encouraging. “We have DTH and the Ailey company,” several people told her. “Why do we need you?”

Others asked, “Why don’t you just stay at Atlanta Ballet? Why can’t you just be satisfied?”

The couple’s answer was, “Whatever. We’re going to do it anyway. There’s a need and we’re going to fill that need.”

The name “Ballethnic” came from an idea Lucas had thought of when he was in college — it combined names of the two dance forms he loved most — ballet and ethnic dance, an inclusive term for many dance forms from around the world, especially African dance. He suggested it to Gilreath, who said, “Oh, that’s good.”

Gloria Bowden, box office manager at Atlanta Ballet, recruited board members from the larger organization and showed the couple how to apply for grants. With $5,000 from the Georgia Council for the Arts, Ballethnic Dance Company gave its first performance on May 5, 1990, at Spelman College’s Baldwin W. Burroughs Theatre. Former Atlanta Ballet dancers Rita Blackson and Christopher Kirby performed, along with Jennifer Bell and Andrew David. Gilreath and Lucas danced the elegant grand pas de deux from Le Corsaire; the company performed two works by Manny Rowe.

Local African dancers and musicians joined them in an experimental work based on the inspiration of the drum — a precursor to Ballethnic’s original piece The Leopard Tale. Playing to an overflow house, they received several standing ovations, and Helen C. Smith of the Atlanta Journal-Constitution deemed the performance a “smashing debut.” 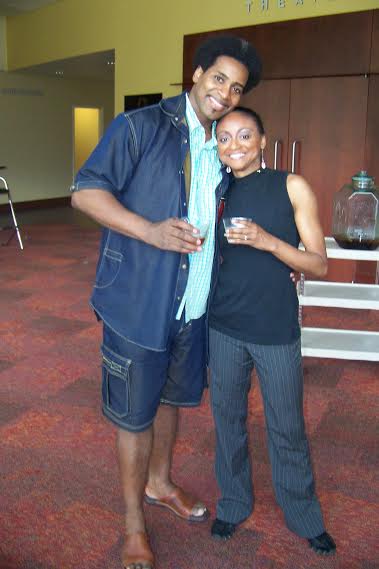 After founding Ballethnic in 1990, Lucas and Gilreath held steady to their vision.

Two weeks later, the company was featured at Atlanta . . . Dance on the Loose, a juried showcase organized by the Atlanta dance umbrella organization Dancers’ Collective. Later that summer, the company performed at the National Black Arts Festival, the first of many NBAF appearances that helped the company gain a national presence.

During the fall of 1990, Roscoe Sales joined the company. The football player-turned-dancer had graduated from the North Carolina School of the Arts and had been working in New York. His wife, Diane, would join a year later.

The company was gaining momentum. In the winter of 1991, seven Atlanta Ballet dancers — Jorge Laico, Maiqui Manosa, Debra Bale, George Prieto and Stephanie White – began moonlighting with Ballethnic as the troupe prepared Visage D’Afrique, a new show to be performed at Southside High School. Several African drummers were lined up to play for a The Leopard Tale, a story ballet that blended African dancing with classical ballet.

Then an offer came along that tested Lucas’ commitment to the Ballethnic vision.

The Basel Ballet offered Lucas the role of a lifetime — Spartacus, the virtuoso principal role in the Soviet-era ballet by the same title, about a Thracian gladiator who led a slave rebellion in Ancient Rome. Lucas had learned the ballet at Dance Theatre of Harlem (DTH). The Swiss company needed a strong male dancer with excellent partnering skills. On recommendations from artistic staff at the Atlanta Ballet, DTH and the Alvin Ailey company, the Basel Ballet offered Lucas the job.

Lucas could see himself living in Switzerland, touring Europe and the U.S., dancing his dream role. Financially, Lucas’ salary would support him while covering Gilreath’s and Sales’ salaries at Ballethnic. But then he remembered the naysayers who doubted his commitment to Ballethnic and Atlanta. “You’ll jump around,” they predicted. “The first time you get offered something, you’ll be gone.”

Lucas knew that if he accepted the offer, he would validate the naysayers’ doubts and his credibility would be shot. Lucas told himself, “If you don’t stand for something, you’ll fall for anything.”

Giving up that role was the ultimate sacrifice. But he knew then that Ballethnic Dance Company was meant to be.