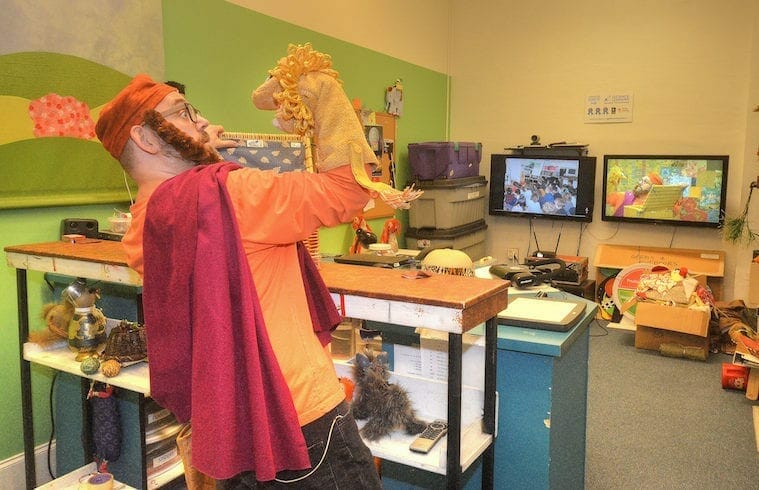 Puppeteer Jeffrey Zwartjes plays all the characters in a digital performance of "Aesop's Fables." One of the screens in front of him shows his audience, the other shows what he looks like to them. (Photos by Chris Hunt Photography)

For now, tune into the Center for Puppetry Arts online weekday mornings, afternoons

The Center for Puppetry Arts, like all metro theaters, has been shut down by COVID-19. Like Dad’s Garage Theatre however, it’s pivoted to make its work available online.

The center officially closed March 16. Leaders huddled the next day to figure out how to reinvent what they do. Much credit goes to the center’s digital learning department, which dates to 1998.

“I have been impressed at how they said, ‘We have to get our stuff out to the public, so let’s figure out a way to do that,'” interim managing director Beth Schiavo says of her team. “There has been a huge lack of ego. It’s all about how we get a good variety. The process has been very creative.”

The Center for Puppetry Arts does as many as 700 performances each season, most of which fall into two categories — puppet shows for entertainment and curriculum-based educational material. The digital learning department is used as a remote opportunity for schools that cannot send their students to the center in person. They are outside Atlanta, outside Georgia or international but wanted access to the programming. The interactive performances let students talk to each other in the midst of show and do projects while watching, Schiavo says. Still the program’s overall growth had slowed. “We were wanting to relaunch anyway, she says. “We have been able to make lemonade out of the lemons we have been given.”

Since the Midtown company went dark, it has tried to schedule two to four hours of programming that begins at 9 a.m. each weekday. The content — live puppet shows, workshops and museum tours — is largely available from the center’s Facebook page. and each day’s schedule is on the company’s website. It’s all free.

Puppet POW: What Is a Puppet features one-on-one experiences with a puppeteer and puppet. The Make It walks viewers through a home-crafting project. Captain Healthy and Safety Dog — which is especially popular — is a short show about the importance of handwashing. In The Little Red Hen & the Grain of Wheat, puppeteer Jeffrey Zwartjes uses hand puppets to tell the story of a hen who wants to harvest the wheat but gets no help from her barnyard compatriots.

“We were a little blown away. The first week we reached more than 3,500 people watching our livestream,” Schiavo says. “The day we moved from Zoom to Facebook we had 1,300 people sign in for the first performance. We’ve had viewers from around the country and some international viewers. Our first international viewer was from Italy, which was heartwarming because they’ve had such a hard time. We’ve also had Costa Rica, Greece and Thailand. Puppetry is a multinational art form. It is more popular outside the United States than it is inside.” “Aesop’s Fables” from the audience’s perspective. With COVID-19 keeping everyone at home, the Center for Puppetry Arts has moved its content to Facebook. This photo predates that.

Much of the heavy puppet-lifting is done by Zwartjes. He’s been at the center for almost 20 years, doing such mainstage shows as Charlotte’s Web and Dinosaurs and taking part in educational workshops. He’s performed to sold-out audiences and alone in a studio talking to a camera.

“What I like about puppetry is that there isn’t just one way to do it,” he says. “There are so many approaches. Every show is a new adventure, a new challenge.”

He enjoys both mainstage and digital work, noting that the two are vastly different, especially the interactive element of digital performing.

“Even though the students are far away and you are looking at them in a screen, I am able to be a lot more direct and interact with them and involve them in a conversation,” he says. “When you are in a big theater, you have to play the back row. The script is solid and you can’t diverge from it. This gives you the opportunity to improvise and make it a lot more rich. To me, it’s more intimate.”

When the center reopens, it wants to have all its programming online as a paid premium and to supplement live performances. Much of its past programming has been archived but is not yet broadcast-ready, Schiavo says. “We want it to have the highest production quality.”