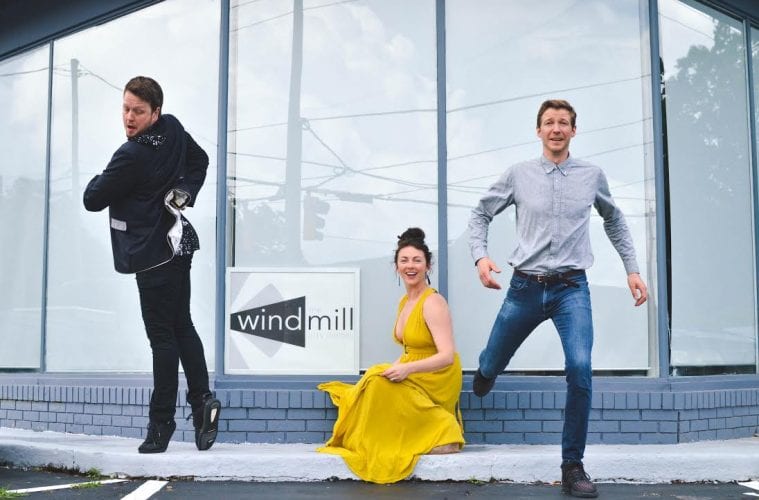 Sean Nguyen-Hilton (from left), Nicole Johnson and Nathan Griswold at Fly on a Wall's Windmill Arts Center space. Excuse the Art audiences will sit outside and watch works-in-progress through the windows. (Photos by Christina Massad)

Just as the world was shutting down 14 months ago, Fly on a Wall was hosting its first Excuse the Art series. Artists and audience members gathered at the Windmill Arts Center in downtown East Point to watch works-in-progress, ending the night by mingling in the lobby and sharing their thoughts with the creators.

Excuse the Art returns this Thursday–Sunday when Fly on a Wall hosts the second annual series at the Windmill. The three-day event, says Fly cofounder Sean Nguyen-Hilton, is intended to give artists the space and resources they need to develop and share unfinished work with a live audience.

“We’ve all experienced ‘Learn it quick and perform it’ as professionals,” he says. “This came about because we know when you stay with an idea longer, it tends to open up and become more revealed.”

It’s a rare opportunity to have as an artist. Often, little value is placed on the unfinished, and the idea of sharing a work-in-progress with an audience is almost unthinkable. That’s what makes Excuse the Art so unique. It gives audiences a chance to see the “messy bits” and the “in-between spaces” of a work of art, Nguyen-Hilton says. 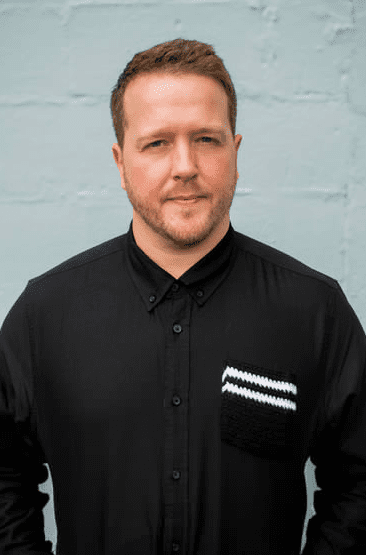 There’s no theme for the Excuse series, but Fly cofounder Sean Nguyen-Hilton says he’s noticed that many of the works  focus on healing.

This year’s series will feature works by 14 metro artists chosen from a pool of applicants by a  panel of educators and artists. Participating artists have been able to rehearse at the Windmill and check in with one another via Zoom to discuss their progress and solicit feedback.

The work leading up to Excuse the Art this year looks much like it did last year, but the performance will be quite different. Due to COVID-19 restrictions, audience members will watch from outside the Windmill, looking into the white-box studio space through its large windows. The black-box space usually used for performances will function as a warm-up area. “All of the intentions of the rooms have really shifted,” Nguyen-Hilton says. “We enjoy that new perspective, and we think it’s just an interesting way to approach making work.”

Attendees will sit socially distanced from one another and, after each work, will be able to share their feedback through a digital survey.

There’s no set theme to the series, but Nguyen-Hilton says he’s noticed a focus on healing in some works, including his own. “I think that comes from having a long reflective period where everything just switched,” he says.

The pandemic has certainly given artists a lot of time to reflect. After recovering from the shock of having to stop classes and cancel performances, the Fly team used the time to develop from an administrative standpoint. When it realized it wouldn’t be using its Windmill space for classes, the team offered its studio to Atlanta artists for free, which led to more than 265 hours of time donated to some 25 artists.

As artists across Atlanta tiptoe their way toward live classes and performances, Fly hopes to restart some of its programs. August will see the tentative return of Fly’s creative intensive and, over the summer, the annual artist residency. Fly is looking for a space for team member Nathan Griswold’s Tile to premiere, since its performance was lost to COVID-19 last year.

Fly members are hopeful. Excuse the Art will be the first in-person performance they’ve hosted since the series debuted last year. Nguyen-Hilton sees it as a chance for Atlanta’s art community to quell its cravings for connection and expression. “There’s something that happens when an audience’s gaze falls on to a work, on to people performing,” he says. “There’s some magic that happens there, and often we don’t know about that as performers until we open the show.”