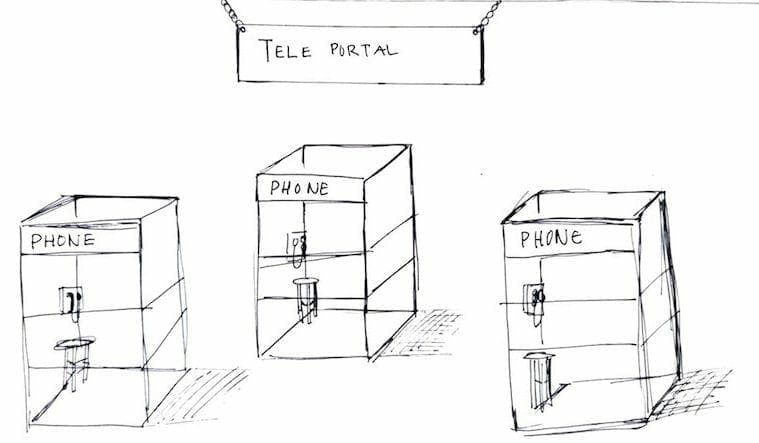 "Teleportal," from Talecia Tucker, is a multimedium, interactive piece designed to look and function like retro phone booths. It will allow guests to pick up a receiver and listen to a series of prerecorded conversations. (Sketch by Margarita Herrejon)

What’s the first thing that comes to mind when you hear “Ponce City Market”?

If historic preservation, mixed-use development or people chowing down in the Central Food Hall top your list, curator Ben Coleman hopes this year’s FLUX Projects public art event, FLUX: Ponce City Market, will change how you engage with the in-town development and your perspective going forward. Ben Coleman curates “FLUX: Ponce City Market” and is one of eight artists reimagining its winding stairwells, cavernous halls and tiny alcoves there as a playground for sound. (Photo by Stu Marvel)

Sonic art is the practice of using sound as the primary medium to convey a message. Janet Cardiff’s The Forty Part Motet (2001) — 40 high-fidelity speakers assembled in a circle — is a prime example. Typically, laboratory-style environments are ideal for such works, but there are different iterations beyond the white-cube standard.

“We are embracing the fact that PCM is an unorthodox, loud space that’s full of people going about their lives,” says Coleman, who sees the unruly aspects of the soundscape as an asset. “We’re trying to encourage people to use their listening faculties in order to reorient themselves in space and re-experience their daily activities . . . through a sense we often neglect, which is hearing.”

Coleman is one of eight artists who have reimagined the market’s winding stairwells, cavernous halls, tiny alcoves, passageways and chambers as a playground of acoustic space in order to “turn up the volume” of the building. They were asked to consider how sound could be used to speak to the space’s history, current use and potential future, given PCM’s role in the renewal and transformation of Atlanta.

The natural pools and surrounding park of Ponce de Leon Springs, discovered in 1868, were a big draw for locals then seeking a place to rest and rejuvenate. By 1926, urbanization permanently altered the landscape when Sears, Roebuck & Co. built a distribution center there. The city of Atlanta bought the property in 1990 as a hub for municipal departments and programs, before selling it to Jamestown Properties 20 years later as the future home of Ponce City Market.

“The projects chosen for FLUX: Ponce City Market,” Coleman says, “were included for their innovation, depth and creativity in exploring sound and space.” Talecia Tucker, who works in retail at Ponce City Market, wants her “Teleportal” to alter how customers and employees react to one another.

Talecia Tucker, a postdisciplinary artist working in fashion and photography and as a maker of zines, will offer her Teleportal. The multimedium, interactive pieces designed to look and function like retro phone booths will allow guests to pick up a receiver and listen to a series of prerecorded conversations between Tucker and PCM employees. She hopes the exercise will prompt participants to reconsider the strictly transactional nature between customers and employees in favor of a more humane exchange.

“Yes, you come to consume something,” says Tucker, who works as a home stylist for West Elm at PCM. “But you can also interact with the security guards, store clerks and restaurant staff serving you to have a richer experience, understand their backgrounds and find out what we have in common.”

Tucker, a native Atlantan, says the interview process heightened her awareness of legacy populations around PCM and the plight of people being displaced. Or, as one of her subjects said, “It would have been great if developers had arrived, rolled up their sleeves and learned about existing populations in the neighborhood to find out what we needed . . . as opposed to imposing something we didn’t need.”

Tricia Hersey’s A Resting Place seeks to redress the terror of Atlanta’s Jim Crow era — when signs at the entrance to Ponce de Leon Springs stated, “No Colored People Allowed” — by reclaiming the space and allowing a select group to experience the healing properties of rest and relaxation.

“Ninety percent of the performers will be native, black Georgians with grandparents born here,” says Hersey, a performance artist, theologian and founder of The Nap Ministry. “My hope is for all who encounter it to experience a slowing down in breathing, in thinking and intuition . . . and have a quiet moment to remember the past while making space for the radical healing that is available to us now as a community. I hope it brings people joy.”

A rest altar will be constructed on the former train platform that connects the Shed to the Atlanta BeltLine. Coleman composed an original score for the installation by combining elements of gospel music, archival work songs and sound elements selected by Hersey — who believes sound can shift the listener on a somatic level.

“This is a departure for Tricia and Talecia, neither of whom have worked in this medium before,” says Coleman. “And yet their projects are two of the strongest we have in the mix. When I read Tricia’s concept, I knew I had to make it happen by hook or by crook. And Talecia’s unique perspective as a native Atlantan who works in Ponce City Market could not have been more of a perfect storm.” “Turbulence” explores environments with virtual flocks of sound that fly the length of the Shed, interacting with industrial and human soundscapes of Ponce City Market and the Atlanta BeltLine railway. (Photo by FLUX Projects)

Other installations — including Silent Like a Waterfall by Jane Foley; Four Part Canons by Eli Keszler; Turbulence by Kai Riedl and Éric Marty of Otherpole collective; Tubes by Unexpected Collective (Rebecca M. K. Makus, Elly Jessop Nattinger and Peter A. Torpey); and Escalier Forte by Mark Wentzel and Andrew Lackey will round out the collection — offering something for all ages, sensibilities and levels of accessibility.

“Play is a big part of this,” says Coleman. “I look forward to seeing kids interact with those works because they’re going to be really fun. All of the work is sensorial and immediate. And I’m really excited to see the space full of people.”