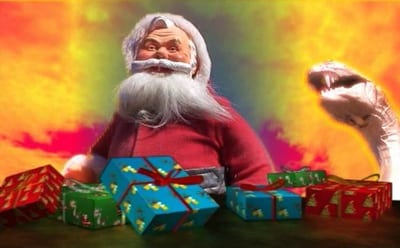 Legendary film director George Kuchar has made a music video for “Solstice,” a satirical Christmas song by Atlanta’s very own Andy Ditzler.

A patriarch of the underground film scene in the 1960s, Kuchar influenced Andy Warhol and John Waters. The video, which debuts today on Ditzler’s website, is typically Kuchar in its outrageous costumes, special effects and sexual shenanigans. A still from “Solstice.”

Ditzler met Kuchar last year when the filmmaker attended a screening that the singer-songwriter had organized as part of his “Film Love” series.

“At that time I gave him my first CD, and he was very positive about it,” Ditzler says. “As soon as ‘Solstice’ came out last year, I invited him to do a video. He liked the song but, because of lots of projects, couldn’t work on it until this year. As you can imagine, I’m pretty thrilled that he did this. George is one of my filmmaking heroes.”

You can download the song on iTunes or CD Baby.