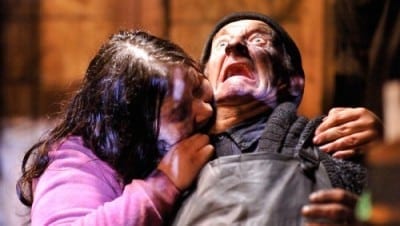 Review: Zombies back in fashion, but George Romero’s latest is brain dead

With hit satiric flicks (“Shaun of the Dead,” “Zombieland”) and a big-selling mashup book (“Pride and Prejudice and Zombies”), the undead are enjoying a zesty pop-culture resurrection. There is also a revival, of sorts, right here in Atlanta. But the latest film from writer-director George A. Romero — whose 1968 “Night of the Living Dead” is the “Citizen Kane” of movies about brain eaters — is D.O.A.

Following his dramatically bloodless (sorry) “Diary of the Dead” (2007), “Survival of the Dead” comes off, with its grade-Z script and special effects, like one of those monster-of-the-week flicks from the Syfy Channel.

In the early days following the inexplicable transformation of the dead into shambling cannibals, we meet an AWOL band of soldiers, comprising some script-by-numbers characters: You’ve got your tough sergeant (Alan Van Sprang), a fierce-but-gorgeous lesbian (Athena Karkanis) and a Latin wannabe lover (Stefano DiMatteo), who actually has to spout lines like “Boats, they are like women.…”

Busting zombie heads with lots of gross if unconvincing CGI, these rogue soldiers land on a small island off the coast of Delaware, where they encounter something scarier than the undead: a whole ’nother group of cinematic clichés. You see, the place is the site of a longtime Hatfield-McCoyish feud between Irish-American clans (led by actors Kenneth Welsh and Richard Fitzpatrick). Their biggest bone of contention seems to be who can deliver the thickest, blarniest, oh-me-Lucky-Charms-iest accent.

But actually the two men have competing philosophies regaring the won’t-stay-dead. Welsh likes to shoot zombies through the head and turn their power switch off for good. Fitzpatrick, for vague and arbitrary reasons, prefers to keep them around, chained, like dangerous, lobotomized pets. (There could be a Terri Shiavo-level metaphor here about what constitutes “life” once a person’s brain and personality are effectively defunct, but nothing as interesting as that emerges amid the shouting and the squib-splatters.)

It’s a shame, because “Night of the Living Dead,” while made on a shoestring, still has the power to shuffle its way into your troubled dreams. Its sequel, “Dawn of the Dead” (1978), remains as witty as it is gruesome. But, on the evidence of “Survival of the Dead,” Romero needs to let his zombies R.I.P. already.