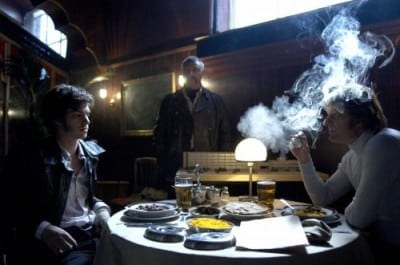 You want bleak? I’ll give you bleak. Go to Landmark Midtown Art Cinema and buy tickets to the three-part heaping helping of serial murder, police corruption and granite-gray despair known as the “Red Riding” trilogy. Just don’t say I didn’t warn you.

Based on David Peace’s best-selling books and originally shot for British television, these overpraised movies — “Electrifying!,” “Cinematic Event of the Year!” — are, if nothing else, an interesting experiment in visual texture. Julian “Kinky Boots” Jarrold shot the first (“Red Riding: In the Year of Our Lord 1974”) on 16mm film. James “Man on Wire” Marsh shot the second (“1980”) on 35mm, and Anand “Hilary and Jackie” Tucker handled the finale (“1983”) with a Red One digital camera. Thus, each of the three parts has its own look. But they share a monotonous, grinding worldview.

The films unfold in northern England, around Leeds and the killing grounds of the real-life Yorkshire Ripper. The focus is on a string of murders, plus a whole lot of police corruption. “1974” gives us a feckless would-be hero in Eddie Dunford (Andrew Garfield), a newspaper reporter cast into choppy depths as he tries to draw connections among the unsolved killings of several schoolgirls. (Like the character he plays, young Garfield isn’t up to the job.) In “1980,” Paddy Considine plays a police inspector brought in from the outside to track the Ripper, while dealing with loose ends of a nightclub shooting six years before. And in “1983,” a detective (David Morrissey) whom we’ve seen embroiled in shady police business in the two previous films starts to grow a conscience. And it’s about time.

In these films, every man who comes across as murderous is probably, yeah, a murderer. But fellows who seem to be saints are just as likely to have blood on their hands and bones in their basements. And the police? Forget about it. In case we miss the theme of regional lawlessness, the three movies give us cops and businessmen repeatedly raising their glasses to toast the north, “where we do what we want!”

Look, I love dark material. But give me a little variation, please. Searching for a sense of “realism” and “truth,” the “Red Riding” movies are almost comical in their refusal to suggest that life is anything but a compost heap, and mankind the worms churning through it. Some of Britain’s finest working actors — including Sean Bean, Mark Addy, Rebecca Hall, Lesley Sharp and Peter Mullan — struggle fruitlessly to keep their heads above the muck.

On top of the films’ unrelenting self-importance, here’s an additional cultural caveat: You may not understand a lot of it, due to the overlapping dialogue and thick northern English accents. Fair warning.