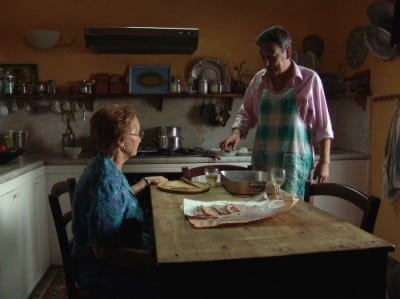 Slight and bittersweet, “Mid-August Lunch” — “Pranzano di Ferragosto” in the original — is a far cry from the mafioso violence of “Gomorrah,” from 2008, a movie co-written by Gianni Di Gregorio. Here, he makes his directing debut, as well as penning the script and starring as a man named, well, Gianni. Sad-eyed and gently patient, Gianni lives in a spacious but crumbling Roman apartment with his 90-something mother (Valeria De Franciscis). Pushing 60, Gianni is no kid himself, and has never been married. (There’s an interesting vagueness to the nature of Gianni’s sexuality.)

What we see of the mother and son’s daily lives is comfortable, if a little lonely in its coziness. At bedtime, Gianni reads “The Three Musketeers” to his mama, but she’s less interested in the swashbucklers’ escapades than in deciding whether she thinks young d’Artagnan sounds handsome. Caring for his mother has become “my job,” Gianni tells a neighborhood drinking buddy. And it’s a job that doesn’t pay, as proven by the arrival of the building manager, Alfonso (Alfonso Santagata).

Alfonso warns that the other tenants are planning legal action against Gianni and his mother, who haven’t paid a cent toward communal maintenance fees in three years. And yet . . . Alfonso would be happy to smooth things over, and cover the unpaid bills, if Gianni will host his own mother for a day and night while Alfonso joins his own wife and children for a vacation in the countryside.

There’s a hitch, of course. Alfonso brings not only his mother, Marina (Marina Cacciotti), but also his forgetful Aunt Maria (Maria Cali). The family doctor, meanwhile, chooses this moment to ask whether Gianni could also take in his mother, Grazia (Grazia Cesarini Sforza), for the night.

Each of the old women is fussy in her own way. And, as strangers thrown together, they sweetly jostle for supremacy in passive-aggressive ways familiar to anyone from the Deep South who has women-of-a-certain-age in their family. Luckily, “Mid-August Lunch” doesn’t devolve into “The Golden Girls Go Roma.” Di Gregorio avoids easy cuteness and broad jokes, but he wryly charts the ways these ladies — even at their advanced ages — go from a “Mean Girls” stage into becoming BFFs.

And he lets melancholy seep in. “Old age offers so little, so you walk back through the years,” Grazia explains, half apologizing, as she keeps Gianni awake all night, reminiscing about her girlhood.

“Mid-August Lunch” is a brief film, but it feels lived in. We follow Gianni around the streets of Rome (virtually deserted, because most people are on vacation for the month). He plans a menu for the ladies, scrounges up ingredients from the local stores, and cooks (while smoking and drinking nonstop). By movie’s end, he doesn’t suddenly land a soulmate, or an exciting job. He just has three new, if ancient, lady friends. In the movie’s quiet appreciation of the small joys in life, that seems enough.