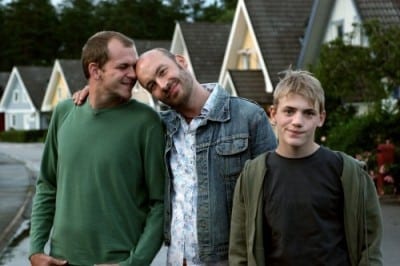 The sweet if slightly bland Swedish gay-adoption dramedy “Patrik, Age 1.5” is distributed in the States by the LGBT cable network known as “here!” (lowercase and with an exclamation point). That feels about right. This movie would work just fine on the small screen.

It opens with young doctor Göran (Gustaf Skarsgård) meeting his new neighbors at a garden party next door. Where’s the wife? people ask. There isn’t one, but there’s a husband, Sven (Torkel Petersson), who has an ex-wife himself, a teenage Goth daughter, and a bunch of monkeys on his back (smoking, drinking, screwing around). And he and Göran are planning on being co-daddies soon, if Sweden’s adoption network can match them with a baby.

Fatherhood largely seems a unilateral decision, instigated by Göran — a soft-bodied, sweater-wearing goodnik who’s as boring (in cinematic terms) as he is nice. Fair warning: He’s our hero. Director Ella Lemhagen shows Göran gazing longingly at babies in playgrounds in a way that’s — what’s the right description? Obsessive? Creepy? Call-the-cops-ish? The movie never quite explains why a 30-year-old man so vitally craves a child.

Regardless, his prayers seem to be answered when the agency declares that an orphan called Patrik, age 1.5, is available for adoption. A few weeks later, when an angelic-looking but thuggish 15-year-old (Thomas Ljungman) named Patrik shows up on their doorstep, it takes a remarkably long time for Göran and Sven to figure out that they’re on the receiving end of a bureaucratic error caused by a misplaced decimal point.

Conflicts are deployed with clockwork precision. Patrik is a damaged soul who wants nothing to do with a couple of “homos.” Göran and Sven fear sleeping under the same roof with a kid who’s spent most of his life in youth detention centers. Sven starts smoking heavily, swigging until he’s staggering, and tossing smoldering glances at a hunky guy at his office. But these tensions dissolve in ways that suggest that Swedish filmmakers are just as susceptible to easy dramatic clichés as their American counterparts. Granted, a couple of times the screenplay appears to grow a figurative spine, tossing in some edgy, unexpected turns. But everything is destined to get smoothed over ‘ere long, even at the expense of emotional logic.

In particular, Göran and Sven’s relationship undergoes a dramatic transition that the movie reverses in the final minutes to make way for a tidy ending. The resolution makes Göran appear like a pushover and sap — and exactly the wrong person to be a parent figure to someone like Patrik. The movie’s heart is in the right place. Its head? Not so much.