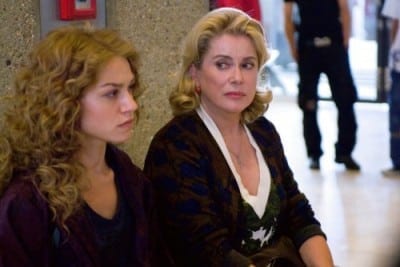 Most of the people in “The Girl on the Train” are unlikable, and it’s not just because they’re French. Well, that may be a contributing factor, but it’s not the whole croissant. André Téchiné’s loosely fact-inspired film focuses on Jeanne (Émilie Dequenne), an early-20s beauty who spends her days rollerblading through the parks of Paris or, back home in suburbia, offering her mother Louise (Catherine Deneuve) new excuses for not seeking a job.

When Mom pulls strings to land her an interview for a secretarial post with a lawyer named Bleistein (Michel Blanc) — who long ago carried a torch for Louise — Jeanne blathers on about what a good worker she is. But as Bleistein’s factotum (and daughter-in-law) Judith (Ronit Elkabetz) puts it, “Your exact skills escape me.”

Jeanne doesn’t get the job, but claims to her new boyfriend that she did. He’s an aggressive creep named Franck (Nicolas Duvauchelle), who pursues her on his rollerblades one day. If Jeanne has not by now proven her idiocy to us, she does so by moving in with Franck to be a well-paid “caretaker” of a storefront-cum-apartment. Anyone above the age of 7 would realize the place is a front for some sort of illegal business. Not Jeanne.

Based on a real event from 2004, the movie, after drifting for half its length, seems to come to grips with a central plot point. Jeanne draws swastikas on her torso, lightly scratches her face with a knife and pretends to have been the victim of an anti-Semitic attack by thugs on the Metro … even though she isn’t Jewish. No, it doesn’t make sense. The movie proposes that Jeanne is seeking attention because she’s had a super-crummy couple of days.

Whatever political and social repercussions the actual, race-baiting case may have ignited in France, they’re tidily contained in “Girl on the Train.” Yes, Jeanne’s lie hits the airwaves. But a visit to a lakeside country house, some boating in the rain and candid words from a wise-beyond-plausibility 13-year-old boy (Jérémy Quaegebeur) are all that are required to make Jeanne admit her lie. Her hoax is viewed in the film as more of a familial inconvenience than an affront to a nation’s precarious sense of itself.

Director Téchiné has made some interesting, layered movies in the past, including “Wild Reeds” and “Thieves (Les Voleurs).” But “The Girl on the Train” is frustratingly opaque, misusing the talents of cinematic lions Deneuve and Blanc. You leave the movie wondering, does the director see Jeanne as a symbol of France today? Blithe, beautiful, empty-headed? If Jeanne’s opportunistic callousness is Téchiné’s point, he doesn’t make that at all clear. Maybe I missed the movie’s deeper meanings. Then again, maybe I was just too annoyed with its characters to really care.