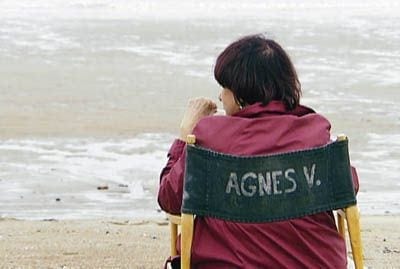 A bit of cinematic whimsy that’s as charming as it is maddening, as self-indulgent as generous, “The Beaches of Agnès” is French director Agnès Varda’s digressive look back at eight decades of life, love and filmmaking.

A writer-director of features and documentaries, she’s also the widow of Jacques Demy (“The Umbrellas of Cherbourg”) and a friend of a wide range of international artists from the mid-20th century on. “Beaches” flits through all her films and friends in a genial way, while also resolutely avoiding any genuine analysis of her own work and history.

The movie gets its name because Varda claims she feels that, if pried open, every person would reveal a favorite landscape within. Hers contains sun, sand and surf. It’s here the film presents her buried to her neck, or lounging in a whale-shaped tent. Elsewhere, she wanders about dressed as a potato, or is interviewed by reclusive filmmaker Chris Marker (“La Jetée”), his voice digitally altered and his face obscured by that of a cartoon cat. A lot of this goes a long way.

Anyone unfamiliar with her work — or the names of many French actors and artists she drops without footnote — can feel shut out. Stateside, longtime cronies who turn up for the film range from Harrison Ford (an early Demy discovery) to titillation peddler Zalman “Red Shoe Diaries” King. Arranged on beaches or with snowy backgrounds, they turn to the camera and say nice things about Varda’s friendship…but nothing of significance.

In fact, the filmmaker’s casual, impressionistic approach here suggests that all of her cinematic work must likewise be, well, a mix of performance-art pretension and triviality. You’d never expect her to be author of such masterworks as “Cleo From 5 to 7” (1962), “Le Bonheur” (1965) or “Vagabond” (1985). “Beaches” is best when Varda focuses down, however briefly, on one of these films, or on her longtime love for Demy. But even this marriage, which should be the movie’s emotional linchpin, feels poorly sketched.

For instance, she acknowledges that Demy died in 1990 of AIDS. But she maintains the “affectionate silence” she and her film crew maintained, concerning the source of his infection, as they raced the clock to shoot “Jacquot” (1990), the biographical tribute to her husband, who died 10 days after filming stopped.

A squat, purple-haired tour guide, Varda is engaging company, even when you wish she would slow down and focus a little more. She’s both prickly and adorable, and you get just enough sense of the willful steel beneath her bohemian pose to wish she had exposed a little more of it. In the end, “The Beaches of Agnès” is unique, colorful, playful and with few dull moments. But with very few piercing ones, either.

“The Beaches of Agnès.” A documentary by Agnès Varda. In French with subtitles. 109 minutes. At Atlanta’s Landmark Midtown Art Cinema.