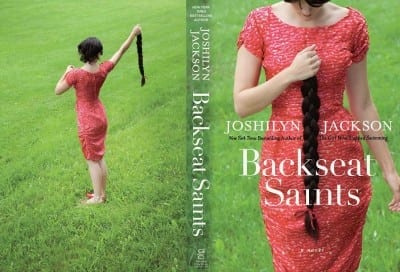 Review: Joshilyn Jackson’s “Backseat Saints,” an abusive marriage and how life shapes it

There comes a fascinating point in the trials of Ro Grandee, a battered Texas housewife determined to destroy her abusive husband, when she realizes that killing him won’t solve anything. Even if she gets away with it, she concedes, “A permanent end to Thom did not end my need for him.”

In “Backseat Saints,” Joshilyn Jackson’s riveting study of a violent marriage and all the reasons it came to be, a woman’s brutal childhood is shown to warp her into something almost as ugly as an abuser: a victim habitually seeking abuse. Desiring it, sometimes provoking it, Ro seems to feel hopelessly fated to be battered. On the same day she takes shots at her husband with a .45-caliber revolver, hiding in the woods as he runs along a trail, she gives in to a frenzied session of conjugal lovemaking. Thom is in shock, having no idea who tried to kill him, and Ro’s excitement over the “hard and good” sex he pushes on her makes us feel that she’s kind of sick, too. Sex is the engine that seems to drive this relationship, firing the pair up whether Thom has just been tender with Ro or furiously punched her in the back.

In fact, the young couple, married five years, fall into the sweetest phase of their relationship following her bungled attempt on his life. She aims her gun at him prompted by a Gypsy’s warning that hers is a marriage “made of swords,” where the only choice is to kill or be killed. Thom, utterly shaken by the shooting incident, becomes soft and needy of his wife. Though he is not nearly as finely nuanced a character as Ro, Jackson succeeds in portraying a vulnerable side of this bully who, in turn, is bullied and controlled by a domineering father. Much of Thom’s rage, Jackson implies, comes from living meekly in the shadow of Joe Grandee, for whom both he and Ro work in a prominent family gun retail business.

Jackson’s coup in crafting this tale is showing us how what we thought was the story — a woman’s desperation to escape a cruel man — isn’t actually the story. Ro’s first fight is with herself, with the raging, traumatized child she used to be. During the golden, honeymoon-like period when her husband is unusually kind to her, Ro struggles to keep this bitter, angry girl, the former Rose Mae Lolley of Fruiton, Alabama, under wraps. It’s Rose Mae who was attracted to the meanness in Thom, who deliberately sets off his temper with nasty, humiliating comments, who plays an active part in making her marriage dangerous.

Rose Mae has determined that Thom must die, while polite, cheerful, ever-hopeful Ro Grandee desperately acts the role of the model wife in their mint-green ranch starter home. Her only aims, she tells herself, are “a clean home, good gun sales, better meat loaf, best sex.” For a while she and Thom float on a cloud of love, and the way Jackson rips that hazy safety net out from under Ro’s feet in one harrowing incident is something to behold as you fearfully suck in your breath.

When Ro launches on a quest to find her old high school flame, Jim Beverly, to knock off her husband, it becomes another step in her self-discovery. The boy whom she always thought of as her savior, because he had offered to kill her father to save her from his savage beatings, was himself a sadist, she realizes. He had treasured her precisely for the bruises and boot marks left on her body by her father, she decides, recalling how reverently he’d touched her black-and-blue skin. Something in Jim, she tells us, had spoken to her, “monster to monster.”

The further Ro travels from Thom, the more fearfully certain she becomes that he will find her and kill her. And yet she feels compelled to revisit the past to somehow undo the damage done to her and discover a purer, better self who has no compulsive need for an abusive man. The savage father who routinely beat her, and the mother who committed an even worse misdeed by fleeing her violent marriage and abandoning 8-year-old Rose Mae to a raging alcoholic, both must account for themselves.

This novel is a tour de force until its melodramatic ending, when Jackson contrives an extreme and unconvincing absolution in an attempt to bring Ro to peace. For some, there is simply no way to make up for the horrible damage they have done. And for others, the victims, like Ro, there is nothing to do but realize that. But Jackson stretches to fashion a punishment equal to a parent’s utterly selfish crime. I recently spoke with Joshilyn Jackson on the phone from her home outside Atlanta, where she lives with her husband and two children. She will speak three times at the Decatur Book Festival, coming September 3-5. Below is an excerpt from our conversation.

Parul Kapur Hinzen: I know you’ve done some acting, and “Backseat Saints” feels like a one-woman show. The character of Rose drives the whole book. What was your inspiration for her?

Joshilyn Jackson: It’s funny you put it in those terms, because I’ve said that exact same thing myself. I usually tend toward an ensemble piece, a cast of thousands even, and “Backseat Saints” is definitely a one-woman show. Rose is the reason I wrote the book. She appeared in “gods in Alabama” [Jackson’s 2005 debut novel], and she was supposed to be this tiny little minor character that appeared in one sentence. And she sort of burst into characterhood in that book, and I was never able to put her to bed. She just kept growing and getting bigger and louder in my head.

Hinzen: Looking at it from the outside, you think of a woman who’s domestically abused as a sad victim — at least I do. You think of her as passive. But in this book you show why a woman would choose a man who’s an abuser and what kind of role she plays in an abusive relationship — not that she “asks for it,” but she provokes. She plays a role.

Jackson: It’s a relationship. It’s a marriage. So it’s more complicated than just “he hits me.” If it were a real marriage where abuse was going on and that’s all there was — he hits her, she takes it — nobody would stay for that. I don’t really think about this book as being about domestic abuse. It’s not an issue book. To me, it’s a book about a woman’s relationship with her mother and her own past. And how this has crafted a cage, and part of being in that cage is being in this marriage.

Hinzen: What kind of research was involved in writing this? Did you talk to abused women?

Jackson: Absolutely. A ton of research. And a ton of interviews. I talked with social workers, and I visited a safehouse where people who were in relationships that were deadly [were staying]. You can’t write about that kind of thing unless you can find empathy, and I don’t just mean sympathy, because that’s just a word for pity. In order to write Rose, I had to get to a place in the research and the talking to people where I could see how it could be me if my life was different. You can’t write about something if you believe, “That would never happen to me.” You can’t write about it with any empathy. For me it came down to, the marriage was a symptom. What was it a symptom of? It’s “she’s self-destructive.” Well, everybody can empathize with that — every smoker can empathize with it. As a teenager, I flirted with every eating disorder on the planet. Something I felt was self-destructive.

Hinzen: In the book, Rose consciously thinks of herself as at least two different personalities. There’s Rose Mae Lolley, who was an abused child. Then there’s Ro Grandee, who’s married to an abusive man. And later she tries to adopt a third persona.

Jackson: The most complicated thing I’ve done from a literary standpoint is the way the entire book is structured on a tarot card reading. It’s in three parts. There are three voices: a  past voice, a present voice and a future voice. Geographically it’s all over the map — Rose starts in the present in Texas, which is the middle of the country. She has to travel east, back to her past, before she can go west, which in this country is a metaphor for going toward the future. Rose is smart, but she’s not hugely educated. She’s very well read but … it’s the best way she could explain it to herself [separate identities marking her evolving character]. I don’t know if you’ve ever had that experience in your life, where your life changes so dramatically that you can’t even believe that other person used to be you. I have.

Hinzen: Is there a connection between acting and writing for you?

Jackson: Absolutely. I mean in the most basic way. Either way, it’s character creation. I’m a very character-driven writer. The other thing that is the same, and this is more “woo-woo,” is that it feels like the same piece of my brain gets warm. It comes from the same place — my involvement with theater and my involvement with writing novels.

Hinzen: What’s your process of character creation? How did this story evolve?

Jackson: I read aloud a lot. I block scenes. If I have a scene, I’ll block it so I know where everyone is standing. I’ll go through the room physically from everyone in the room’s perspective, so that it’s true, and  I’ll sit in their heads and revise the scene. Even though everything comes from the [point of view] of the narrator, what she sees and describes, I know what each person is thinking or feeling. I approach it in a lot of ways as an actor.

Hinzen: When we met once, you said your next novel was about redemption, which is what you’re always writing about. Why is redemption something you want to keep exploring as a theme?

Jackson: Why? Wow. If you look at the root word of “repentance,” it actually means to turn and walk another way. It always interests me when people are on a course, sometimes driving straight toward a cliff edge — I mean, people do this — and something happens, and they turn and go another way. Sometimes with excellent results and sometimes with horrifying ones. People don’t change very much. We are born who we are. But it’s at the moment that change happens within us that we grow up, or we don’t, or we die.

Change is what matters, and I’m interested in what catalyst can cause that. How far can you walk in a direction and still turn and make your way back to whatever “home” means to you? These are the driving thematic questions of my life. These are the big questions I have about how the world works.

Story is the way I explain the world to myself. So, I’m wondering what makes us who we are. Are we born who we are? Do our histories shape us? Or do our choices shape us? Yes, all those things are true, but to what degree? And how much control do we have over that?

I’m very interested in control. I’m very interested in how much of the world around us we can manipulate and control — not very much. And how our reactions to that can make us or break us. In a world where you don’t have any control, how do you survive without grace? And where does that grace come from? I tell stories to answer those questions for myself.