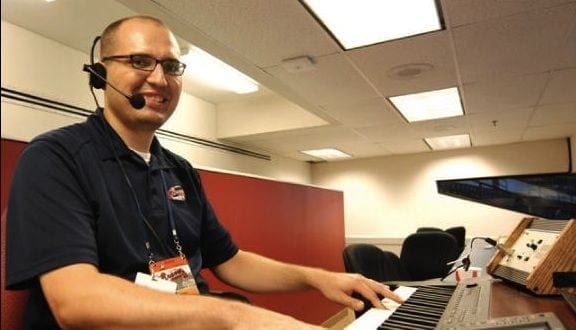 Atlanta Braves organist Matthew Kaminski at his familiar perch in the press box at Turner Field.

As Jose Tabata, an outfielder for the Pittsburgh Pirates, sidled up to home plate on an unseasonably warm April Sunday at Turner Field, the thundering and ominous chords of “Toccata and Fugue in D Minor” by Johann Sebastian Bach rumbled throughout Braves stadium.

Atlanta Braves organist Matthew Kaminski, who musically parodies the names of opposing batters as they stroll from the on-deck circle to the plate, was having a bit of fun at Tabata’s expense. Admittedly, the Bach was a bit of a stretch. Toccata/Tabata? The first batter, Alex Presley, however, was a batting practice strike right down the middle.

A few innings after Tabata’s “Toccata,” Turner Field went silent. A technical glitch caused officials to shut down the public address system in the middle of the game — no announcements, no charges or other rally noises, no organ. The silence when opposing players approached the plate was almost eerie, and it drove home how much Kaminski is now part of the fabric of Turner Field, as essential to the experience as the Home Depot Tool Race or the seventh-inning blasting of “Thank God I’m a Country Boy.”

Now in his fourth season as organist for the team, Kaminski has proven to be a source of delight for fans and a source of chagrin for many opposing players. The musical parodies were the idea of Scott Cunningham, the Braves’ director of game entertainment, who encouraged Kaminski to make fun of opposing batters when he was hired in 2009.

“He loved the ‘game within a game’ that it presents,” Kaminski said. “It took me a month or so to get used to coming up with songs for every player. At first, I just chose the obvious ones and played something generic for the other players. I think my first really good one was some Twisted Sister [Dee Snider] for a player with the last name of Snyder.”

The parodies have since turned into a trademark, utilizing Kaminski’s sharp wit and his ability to hear a tune and instantly play it. “Some people think I have millions of songs memorized,” he said, sitting by his organ in the press box before the Braves took the field. “Before the game, I’ll just go on YouTube and memorize snippets of each song.”

Kaminski, 35, is also a Twitter addict (@bravesorganist) who sends out “tweets” before and during baseball games. Before each series, he’ll ask followers for suggestions and test-drive ideas he already has. Opposing batters on the short side might hear “Mighty Mouse” as they walk to the plate. When former outfielder Matt Stairs came to bat, he was greeted with “Stairway to Heaven.”

Only a few players have taken offense at these musical barbs. New York Mets right fielder Lucas Duda was a bit peeved about his perfect match, “Camptown Races” (“doo-dah, doo-dah”). And when he played for the Philadelphia Phillies, Jayson Werth told reporters that he was puzzled by the playing of “Jesus Is Just All Right” (Werth’s beard and long hair made him look the part).

Many fans will see on-field reactions by the players and relay reports of their grimaces or chuckles to Kaminksi via Twitter.

“I like that the players actually notice it, and hopefully it distracts them,” Kaminski said. “I don’t really take their feelings into that much consideration. I don’t go way below the belt, but with something as silly as ‘Camptown Races,’ I don’t really worry about that stuff.”

In the third row of the press box, Kaminski is a sight to watch, stocking feet bouncing over portable bass pedals, hands divided between a keyboard and a Hammond SK1, which is basically his standard-issue Hammond B3 shrunk down several sizes. It’s not his typical instrumental set-up, but this music, which he describes as “theater organ,” is more a fun day job than his passion. His devotion is to jazz. He studied it in school — he has two degrees from Georgia State University — and two years ago he released his debut CD as a leader, “Taking My Time.”

Before he started performing at Turner Field, Kaminski was playing around town at the typical jazz haunts such as Churchill Grounds, the Five Spot in Little Five Points and various restaurants. He filled his days teaching private lessons, and one of his students told him that the Braves had decided to hire an organist after five years of recorded music.

“He knew the audio engineer who was in charge of looking for a new organist,” Kaminski recalled. “So he mentioned it to me and I automatically said I was interested. I had an interview about a week later. My audition was two spring training games at Turner Field in 2009. The previous organist had retired, and they used organ sound clips for several seasons.”

Between April and October, Kaminski is a full-time baseball organist, playing at 81 home games and peppering in Georgia Tech and University of Georgia baseball games when the big-league club is out of town. But most baseball fans have no idea what he does after the final out. “I think Braves fans would be surprised to hear me outside the stadium, and I think they would be surprised to hear the type of music I play,” he said.

Kaminski’s love of music comes from his father, a Polish immigrant, who would play polkas to wind down after a long day. His father’s records were in constant rotation at their Chicago home, with singers such as Perry Como, Wayne Newton and Frank Sinatra, mixed with a bit of country music. Spurred by this atmosphere of casual music making, Kaminski started taking organ lessons at age five, playing what he calls “Lawrence Welk organ music.”

He didn’t even know what jazz was until high school, when he was thrust into the piano chair in the school jazz band because a friend knew he had been taking piano lessons. The band director gave him a CD by the young phenom Joey DeFrancesco, and Kaminski soon became fanatical about jazz organ. DeFrancesco’s music opened up a new world for him.

“What got me really interested was the possibility of improvising and playing on the Hammond organ something that was completely different from the Lawrence Welk or theater organ styles,” he explained. “Hearing Jimmy Smith play a blues gives me chills. And hearing Dr. Lonnie Smith and all those old guys playing in more of a gospel style really appealed to me. ”

Kaminski entered college as a music major and transferred to Georgia State in 1998 when his parents moved to Savannah. He has been performing around Atlanta since 2002. Locally he plays piano with a salsa band, Orquesta MaCuba, and also has a few accordion shows, but he primarily plays jazz gigs with his own band.

While the organist doesn’t have much time for extra gigs during baseball season, he hits the town in the fall and winter. He usually likes to play with singers, and a large part of his work comes from private events: corporate retreats, weddings and the like. These closed-door concerts are necessary for him because, even though the Atlanta jazz scene has flourished in the last five years, finding steady jazz work in local clubs and restaurants is still a challenge.

“It’s hard for me to have a steady once-a-week thing during the baseball season, but I’ll have jazz gigs with different vocalists or different groups both on the piano and the organ, even on the accordion sometimes,” Kaminski said, adding that he enjoys playing with singers such as Mike Geier, Gwen Hughes and Maria Howell. “I’m always searching; I’m always looking for places to play.”

Kaminski’s love of jazz doesn’t mean he’ll stop playing for the Braves anytime soon. He loves his job and cherishes his interactions with fans, he said. His life does get rather full — he and his wife have a two-year-old — but he said he’s learned to balance family and the Braves with his teaching and other performing demands. Requests for his baseball tunes have gotten so frequent, he said, that he might record a CD’s worth of music to put on iTunes.

Sitting in the press box in April, playing every time a visiting team’s batter stepped toward the plate, Kaminski looked content. The last Braves organist was in the chair for 17 years. As for his Braves tenure, Kaminski said only that he’s happy where he is.

“I think right now I’ve found a good balance between everything. As long as that balance continues, I would love to be the Braves organist for a long time.”