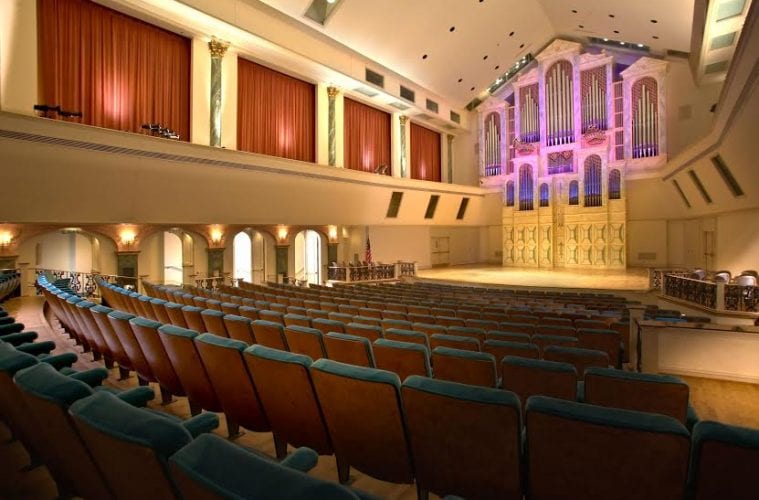 The acclaimed acoustics of Spivey Hall has been a draw for major classical and jazz artists who have performed there.

Last week marked an event of monumental importance to both the cultural fabric of Atlanta and the international music industry at large. Sam Dixon, director of Clayton State University’s acoustically perfect, jewel box recital venue Spivey Hall, stepped down from his 17-year stewardship there. 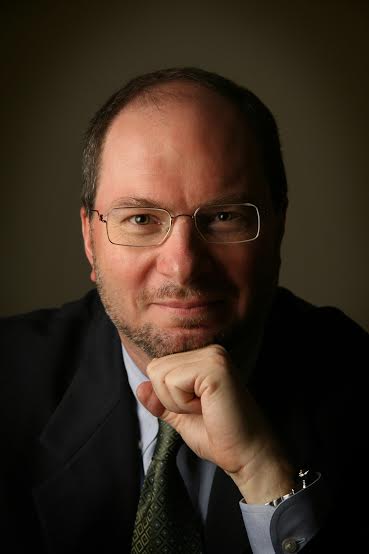 Dixon says he felt the urge for freedom from the demands of his job.

Born in Rochester, New York, Dixon was surrounded by music from day one. Every family member played at least one instrument, and his earliest memories include listening to the classic Ormandy recordings of standard symphonic repertory. At 10, the family moved to Milan for six years,  where his mother directed a music program in an American school. Upon his return, Dixon studied piano at Eastman, and played French horn in band and youth orchestra.

After completing his education at Dartmouth and Northwestern University, he embarked upon a 20-year career managing some of the most notable musical entities in the country, including the Atlanta Symphony Orchestra and Chicago’s Music of the Baroque. Dixon came to Spivey in 2004, initially assisting then-director Sherryl Nelson, then in 2006 became, as he jokes, “King of the Forest. I have the crown and sword to prove it.”

Arts ATL spoke with Dixon about his leadership of Spivey and his decision to move on to another layer of life experience.

ArtsATL; We must ask you the classic life change question — why now?

Dixon: About two years ago, I tried to engineer my exit by proposing that the job, which is both executive and artistic director, be divided into two so that I might have the chance to have a life outside of work. The job grew enormously from the time I took it on, because of the necessity of fundraising following the economic downturn of 2008. The university was unable to accept my proposal, so I stepped back from the precipice and decided to carry on for a while. Then my dad passed away in 2019, and that started my internal clock ticking. My boss here at Clayton State was Dr. Tim Hynes, and he was taking retirement on June 30. In one of our meetings I heard myself say, “I so envy the freedom you’re about to have.” When I heard myself say that, a bolt of light went through me, because my own need to have this freedom was real.

And to be very honest, I got pretty battered up by having to wipe out the season-and-a-half because of the pandemic. I am tremendously proud of how we at Spivey Hall pivoted to online performances, and we had great success with that. But it was physically exhausting to wipe everything out, go to virtual concert presentation, and produce and edit it all. These things require six million clicks of the mouse. I decided I needed to spend less time in front of a screen, and for the first time in my professional life I decided I needed to put my life before work.

I also felt that after 17 years, it was time for, if not a reboot, a refresh. Institutions need renewal periodically; they need injection of new ideas, and people who have different relationships with the repertoire or different understandings of how we might engage new audiences and develop the reach and value of virtual programming. I’ve worked in music my entire professional life, and that is something I have been extremely fortunate to do. I have long relationships with major orchestras and conductors, and have aspired to a standard of excellence, and I don’t give that up easily. But I also know that it’s very challenging to sustain that level of excellence if you’re not all in and I need to be not all in now. I need my own period of renewal.

ArtsATL: What do you think enabled Spivey Hall to become such a huge presence so quickly?

Dixon says the sense of connection between audience and artist in Spivey Hall is palpable.

Dixon: When Emilie Spivey moved ahead with plans to build this gorgeous hall after the death of Walter Spivey in 1984, she had the great foresight to not only raise the money for the hall itself, but to also create a foundation to support music programs at Clayton State. That is a necessary feature for any small hall which has a limited revenue potential to pay fees for international artists like Renée Fleming or Itzhak Perlman. Also, from the very beginning, concerts at Spivey Hall were recorded for radio broadcast and made available. There was a series of broadcasts with the 1996 Olympics which my predecessor Sherryl Nelson engineered. We hosted the Calgary international organ competition finals twice. In other words, we’ve had a strong media presence from the beginning.

But that media presence was made possible because the acoustics of this tiny little concert hall in south suburban Atlanta, that no one had ever heard of before, are just off the charts great. Artists love it, they are inspired by it, and they can take chances here. The sense of audience connection in this hall is so palpable. You can see the artists’ eyes, you can see their faces, and when the acoustics are this great you know this concert is something you’re going to remember for the next 20 years. If you are a real music lover, there is very little in life that can surpass that, and Spivey Hall attracted very passionate music lovers. And that has been the secret of Spivey Hall’s success.

ArtsATL: Have you followed any particular philosophy in your programming?  How have you determined what would fly and what wouldn’t?

Dixon: I always felt variety and balance are key. I felt that a season of programs basically represented something like a series of dinner parties. You have to create a menu. As much as we love steak, you don’t really want steak every day. And as much as we love certain vegetables and fruits, they’re not always available or in season. You must create the best of what you can to entice people to choose to come and enjoy this meal. I learned from a telemarketer (my first job was as a telemarketer for the Rochester Philharmonic, and I’ve been talking to people about music ever since) you sell the sizzle as well as the steak. So the programming ethos is “variety in balance.”

You have to think about where the audience is, meet them honestly, and respect their listening expectations. And you have to create expectations. This has everything to do with how one writes about concerts. I think there is tremendous power in knowledgeable personal enthusiasm about music. Tell me about the artist, tell me what this experience is going to be. There is a deeper history of choral music and singing in Atlanta than there is instrumental music, so we have to be the lichen in the granite and grow from what there is in order to create more. 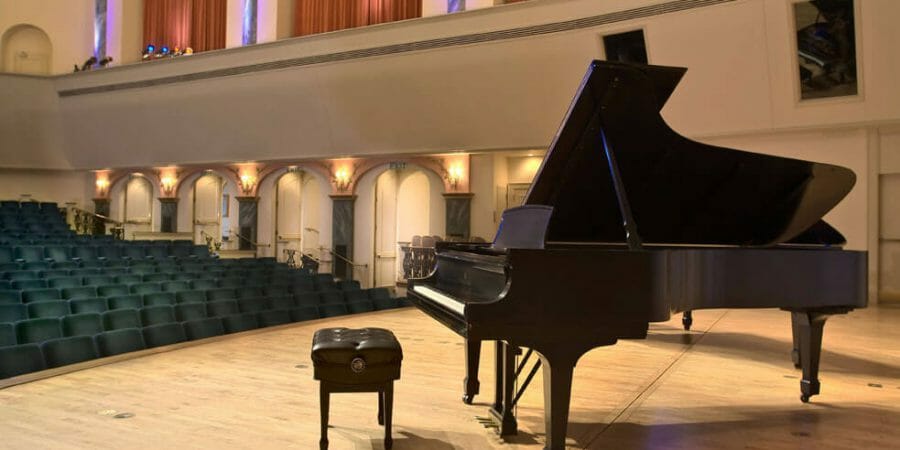 This is our mission statement: “Spivey Hall, Clayton State University’s acoustically superb recital hall, cultivates a community of artists and audiences who share a passion for the discovery and appreciation about expanding music, through concerts and learning experiences.” This has served us extremely well. If we are cultivating that community and bringing them together in ways that are mutually gratifying, our lives are enhanced and people will come back.

Sherryl Nelson had this little bracelet with three questions on it. Is it the best? Who will come? And what would Emilie Spivey do? For years I’ve asked myself those questions, and they haven’t led me astray.

ArtsATL: As you look back over the last 17 years, are there any memories that you especially treasure, or any accomplishments of which you are most proud?

Dixon: I’ll talk about music in a second, but I must mention the development of the Spivey Hall Friends. We have a tradition of philanthropy in the U.S., but before the Friends none of the gifts to Spivey Hall were part of our regular budget. Now, the Friends’ annual gifts and endowments are the largest source of artist fees. I’m so proud of how these relationships with music-loving patrons have matured to secure this future for Spivey Hall. I think that’s going to be my legacy in terms of institutional development.

Some musical highlights just come zooming out. I got the Academy of Ancient Music to come with Richard Egarr to perform the complete Brandenburg concerti. I was exhilarated, I was on cloud 19. I have heard the concerti millions of times, but this was life changing. Another big memory: I had known the French/Canadian pianist Louis Lortie for a long time, but he had never been to Spivey Hall. Louis sat down and played the complete etudes of Chopin in a single sitting. It was mind-blowing; my jaw was literally dropping. Many people remember that one. Then, in the good days before he became overextended, Rolando Villazon sang a beautiful recital. I’m very proud of that, and I have a picture of me standing next to him. We’ve also had Bryn Terfel here several times. I adore him. Those have been huge highlights.

I’m also a gigantic fan of Gerald Finley; Gerry is coming back next season. We’ve also had some fun things happen. Mark O’Connor has been here, the Ukulele Orchestra of Great Britain has been here, plus the Glenn Miller Orchestra. I’m totally in love with Christian McBride and Kenny Barron is one of my favorite people on earth. Oh, and all the violinists, Joshua Bell, Christian Tetzlaff, Hilary Hahn, Gil Shaham — it goes on and on. To have these incredible performances where people come out so nourished and inspired by what they heard is an incredible reward for me.

ArtsATL: You have made an extraordinary contribution. Any final thoughts?

I didn’t do it alone; I had a lot of help. But to be the chef of these many banquets has been a gigantic privilege. It has meant so much to me, both personally and professionally. That is something I would be very grateful to be remembered for.