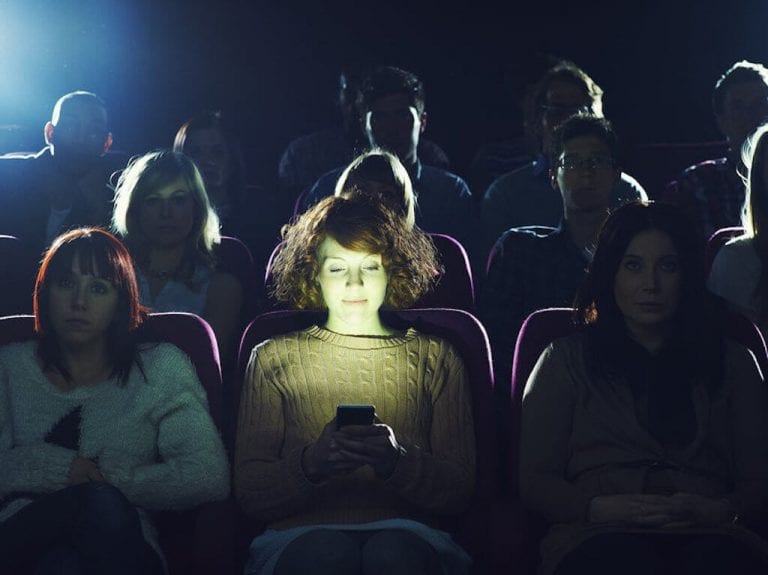 Cell phones have begun to intrude in every aspect of public life. (Photo: Getty Images)

Essay: Can’t we please just put away our cell phones and enjoy the show?

It’s happened — I imagine — to almost everyone who attends theater, film or other kinds of arts events on a regular basis. A patron nearby brings out a cell phone, starts texting or checking their social media, and brings the show’s momentum to a halt. Not only can it disrupt the performance and an audience’s enjoyment of, but it brings with it its own litany of dilemmas.

Over the last decade, cell phone usage has become an unavoidable way of life. Dealing with it while at a performance is often a matter of weighing options. Do you ignore it and hope it gets better, shift seats, or hope that someone else will take care of the situation for you? Do you ask someone (an usher, a staff member) for assistance, assuming — that is — that you’re logistically in a position to do so and not in the middle of a long row? Or do you tactfully try to solve the problem yourself?

As someone who attends a lot of theater, I have explored all these scenarios. I opted for the latter not long ago, however, and I have scar tissue that I might not ever get rid of.

While reviewing a show, I politely asked a patron sitting in front of me if they could stop using a cell phone. In return, I was told to mind my own (expletive) business and not long after faced the possibility of being arrested. My love of theater has taken me to some terrific venues all over the city, but the Gwinnett Detention Center is not one I ever expected to be, at a warrant hearing to determine if I was to be charged and placed under arrest.

I received notification in late February that I was being accused of battery — accused of hitting a patron at a theater early in the year. Making the curveball even curvier was the fact that the courthouse did not have my correct address and when the proper paperwork got to me, the warrant for the arrest hearing was scheduled for two days later — and my accuser was a judge for the Suzi Bass Awards (which honor the best in local theater), who deemed cell phone usage as vital to the job. In a nutshell, I had approximately two days to let this all sink in, find a lawyer and witnesses and prepare.

That I somehow was able to do it was a small miracle. I found a lawyer willing to take the case and find witnesses who could be available to testify on my behalf. When the smoke had cleared, there was no probable cause for an arrest and the facts were pretty straightforward. My action — tapping a person on the shoulder during a performance and asking if they could stop their nonstop cell phone use — was abundantly clear.

In one sense, I feel lucky. Had I not been able to find a lawyer and had witnesses not been available that day, I don’t know what would have happened. I would like to believe that the facts of the case would have been clear, but stranger things have happened.

I can’t describe what this has done to me. This event made me physically sick for a while and stripped valuable professional time away from me. And while good legal preparation is nice to have in your corner, it’s not cheap.

Yet the psychological scars are worse. I feel a bit numb and am still trying to get over it all. The day of the hearing was one of the scariest, most surreal of my life — kissing my husband goodbye as he left for work in the morning and realizing that I didn’t know if I’d be home that night or arrested and held in a detention center, and later going to a bank and getting bail money just in case. All because I had asked a patron if they could turn their phone off during a play. Even weeks after all this, I’m angry and sad — and still in a bit of disbelief.

I have been a theater patron and theater critic/writer for well over 30 years, and it’s one of the great joys of my life. It is something I take enormous pride in and something I take very seriously. How this allegation could have affected what I do and love certainly entered my mind, especially if it had gone to trial.

For better or worse, I am old school. It’s always been my philosophy that when you go to a play, movie or some other comparable cultural event, you adhere to certain standards and etiquette. You don’t talk loudly. You don’t bring out items that can make noise. You don’t use cell phones and check messages and text. Most importantly, you respect your fellow patrons.

As a society, I fear that notion seems to be lost. Cell phone use is rampant everywhere these days. It is estimated that the average person uses their phone every 12 minutes. A casual internet search reveals scores of articles warning of our growing addiction to cell phones.

Movie theaters can be especially rough. I caught a mainstream film not long ago at a mall and was shocked that, in addition to omnipresent texting and phone calls, a patron held his phone up and recorded bits and pieces of the movie. No one even challenged this kind of behavior.

Cell phone use isn’t nearly as bad in local live theater, but it can be an issue. I will say that from what I have observed, the majority of companies take the situation quite seriously. The theater where this event happened took immediate action, has referenced my experience in curtain speeches and has made a public call for greater civility. I’ve seen other theaters take action as well when a patron uses a phone, either proactively or when prompted. I still vividly recall how a stage manager not long ago literally sprinted down the aisle to let a patron know their cell phone use was not acceptable. She was a complete stranger who became a rock goddess to me at that moment. I almost asked for her autograph.

Unfortunately, though, I’ve also been to productions and playhouses where patrons or VIPs or even staff members in the audience notably use their phone at will even after artistic directors (during curtain speeches) have asked them not to — and administration seems paralyzed to take action. When this happens, it sends a clear message to everyone else in the theater. And while almost all ushers I deal with are courteous and helpful, I’ve also run into others who have told me point blank that addressing cell phone users is not part of their job.

I get it. Most nonprofits don’t always have the staff to take on the responsibility of constantly monitoring/policing patrons. I coordinate a nonprofit film festival myself, and we always aim to have a cell phone-free event, but it’s impossible to control every patron and every situation. But I think it’s vital to try.

I love my cell phone as much as anyone, but there are times I don’t need or want it. Going to the theater is one of them. Yet I feel as if I’m part of a shrinking minority here. Having someone use their cell phone during a play is annoying and distracting. It’s also disrespectful to fellow patrons, the actors onstage, the company hosting the production and the theater community as a whole. That some people feel entitled enough to defend cell phone use, even while watching a play, shakes me to the core. I have no idea how we’ve gotten to the point where people feel they are free to use their phones whenever they want, or how asking someone for the common courtesy of turning their phone off during a live performance can almost get a person arrested. I have never understood why people attend a live show if they can’t tear themselves away from their phone long enough to enjoy it.

It’s vital that theater companies and organizations these days learn to grow their patronage and attract younger audiences who will be part of the new generation. But I worry that a newer generation may not fully appreciate theater etiquette. Today’s audiences have access to new information and new messages almost every minute, and attention spans are simply not what they used to be.

It would be easy to call this a generational thing, or an entitlement, Trump-era issue, but that’s way too easy. I simply don’t know the answers.

In my opinion, solving this is up to all of us — patrons attending a performance, theater staff in attendance, and local theater organizations — to set and enforce a standard. Maybe I am a dinosaur, but I can’t in good conscience be one of the people who let it slide when patrons use cell phones during theatrical performances and taint the experience for others. Most live performances are a one-time event.

The easy thing for me to do would be to try and put this behind me and forget it, but I can’t look myself in the mirror if I do that. If nothing else, I hope to at least start a dialogue — and maybe talk to theater administrators to share my story and see if there’s a collective manner in which they all can address the issue. Maybe adopting a strict no cell phone usage policy? Maybe looking at how New York or other cities handle the situation?

What happened to me should never have happened — and I want to do whatever I can to make sure it never happens to anyone here ever again. The theater is one of the few places left where we can go and get lost in another world when the lights go down — free of distractions. I am committed to doing what I can to keep it this way.