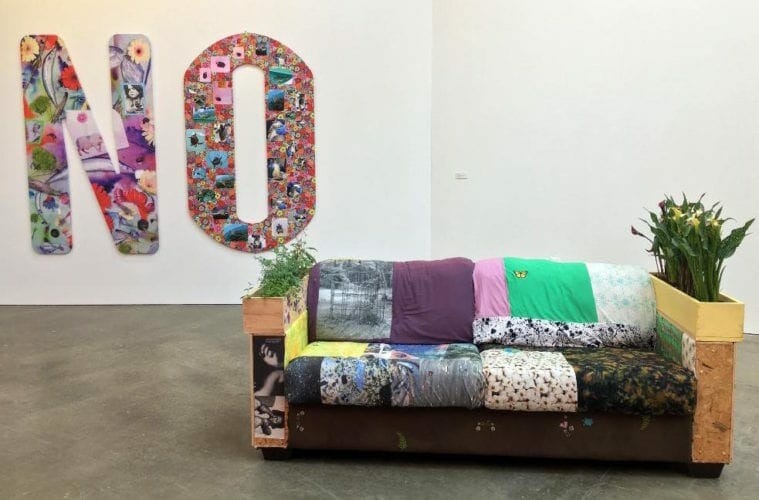 In 1966, Yoko Ono installed a work that required viewers to climb a ladder and use a magnifying glass to find a tiny YES (it was, incidentally, John Lennon’s introduction to the artist). Its opposite might be Atlanta-based Erin Jane Nelson’s 9-foot-tall NO titled Mother Earth Does Not Consent (2019), in the Nelson show Her Deepness (at Atlanta Contemporary through August 4). Erin Jane Nelson makes the Southeast’s disappearing coastal wetlands her subject in this show, continuing a theme she explored last summer at the Whitney Museum in New York.

Ono directed her viewers with a single imperative, but Nelson’s NO invokes resistance with the urgency of a stop sign. Neon-tinted digital images cover the surface of the letters in haphazard, decoupage fashion. The “N” teems with sea and animal life; the “O” shows snapshots of rescued sea turtles against a 1960s-style floral pattern. They suggest crisis in the natural world.

Nelson makes the Southeast’s disappearing coastal wetlands her subject throughout this interdisciplinary show, continuing the interest in environmental change that she explored last summer in the group show Between the Waters at the Whitney Museum of American Art in New York.

The multimedia floral installations Estuary Daisy (2019) and Gulf Rose (2019) stand about three feet tall. The stems and leaves are painted onto the gallery walls, but decorated ceramic forms make up each flower petal and pistol. Inside, colorful tape holds snapshots of trees and ruins in place. Similar, organically shaped wall works hang at irregular intervals around the flowers, some lower than eye level, some far above. These glazed stoneware works usually include printed photographic images, shells, sand and tchotchkes suspended in pools of shiny resin. They evoke the souvenirs and kitschy décor of beach culture while also suggesting the loss of it.

The ceramic wall sculptures often commemorate specific coastal sites, including artist Kenny Hill’s Chauvin Garden in Louisiana, Ocracoke Island in southernmost North Carolina and the ruins of St. Simons Island’s 18th-century Fort Frederica. The Contemporary’s introduction to Her Deepness cites projections that the sea level will rise one to three feet and that Southeastern shores will be subsumed in the next century. Nelson’s works read as memorials to soon-to-be-lost places, each bearing the weight of environmental grief.

Her thrift-store kitsch teeters between irony and sincerity. A little grunge, a little psychedelic, it recalls slightly older contemporaries like Ryan Trecartin and Shana Moulton. Their campy videos and sculptures, in turn, hark back to artists like Mike Kelley and Paul McCarthy. Curator and critic Nicolas Bourriaud identified the early 1990s as an epoch for flea markets, rooted in the use of recycled materials — like Kelley’s dingy stuffed animals, for example — arranged with cluttered informality that gives them new meaning. Nelson’s work bears the cumulative influence of these practices and carries them forward. Crisis Couch (2019) occupies the center of the gallery. It’s covered in a quiltlike assemblage of earthy patterned fabrics and accented by stickers and shells. In one detail, various eyes suggest myriad life forms — animal and human, natural and artificial (one wide-open eye seems lifted from anime). Each boxy plywood arm acts as the base for a planter housing medicinal plants. A stitched-on patch shows the Earth in electric blue and neon chartreuse. It could have easily accented the backpack of a mid-1990s middle-schooler and suggests the absorption of hippie and punk counterculture into the mainstream.

An image pasted on the side of Crisis Couch with DIY informality offers insight. A hand, its fingers poised as if preparing to make a fist, appears in the grainy, stilted chiaroscuro of Xerox copies. Underneath, a quote in thin sans serif type reads: “Before you can come to your center, you will have to pass through a very chaotic state. That’s why there is fear. Nobody wants to go in.” The source is a 1988 book titled Meditation: The First and Last Freedom written by Osho, the Indian mystic and founder of the Rajneesh movement.

Couches suggest comfort and complacency, but if you were to sit on Crisis Couch, you’d turn your back on Mother Earth Does Not Consent’s towering NO and face Raccoona Charon (2017), the exhibition’s largest work. It’s a meaningful, forward-looking positioning that, in the spirit of Osho’s words, encourages difficult personal progression. Ocracoke (2018), resin, sand and pigment print on glazed stoneware (Courtesy of the artist and DOCUMENT Chicago)

Raccoona Charon is 20 feet long and sheer and hangs against a wall painted with a saturated red-orange. It recalls “living coral,” Pantone’s vivacious 2019 color of the year, which is described as “animating and life-affirming.” Raccoona Charon suggests proliferating life in its tangled, messy wonder, with a central amorphous, rootlike form that spawns smaller, fragmented and flowering parts: mouths, snouts, beaks and eyes. Nature appears unpredictably nightmarish — and beautiful.

Perhaps Nelson depicts a burgeoning anthropocene (scientist Paul Crutzen’s term for a geological era in which humans shape the course of nature). Maybe she conjures a biopunk fantasy of spliced genes and modified life forms. Whatever the case, although Her Deepness begins with an assertive NO, her vision isn’t full-on dystopian. It’s a call to action and responsibility that invokes the inherent potential of Ono’s singular, open-ended YES.