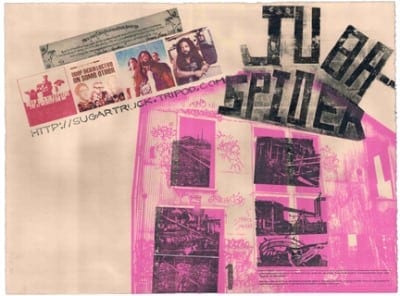 Men as insects, and other work by three emerging artists at Atlanta Printmakers Studio

The Atlanta Printmakers Studio wraps up its inaugural Emerging Artists Residency with an exhibit of the works created by the three participating artists at Portal Gallery, which is in its foyer.

Atlantans Betsy Medvedosky and Whitney Stansell and New Yorker Jenny Zhang employ a wide range of techniques, each suited to their aims and content.”Juba-Spider,” Zhang’s eight-part monoprint piece, is a zine-style narrative about Juba Kalamka, a bisexual black hip-hop artist in San Francisco.
Hanging on wires like a web around the corner of the gallery, the multi-part monoprint is part of Zhang’s series “Men Are Like Fascinating Insects,” which examines and subverts assumptions about male behavior and personae. (More on their work in my story scheduled for the July 24 AJC. )
The Studio, founded three years ago by local artists, exemplifies the power of grass-roots entrepreneurship, which is critical to a community’s health, especially now. So, mazel tov, and may the force be with you!