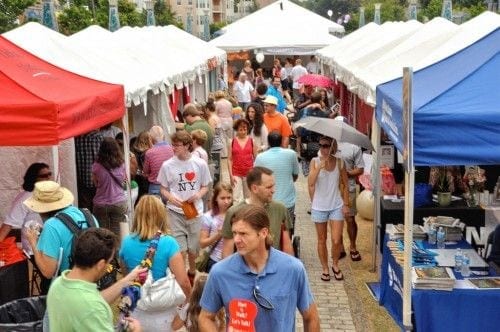 “What really knocks me out is a book that, when you’re all done reading it, you wish the author that wrote it was a terrific friend of yours and you could call him up on the phone whenever you felt like it,” said young Holden Caulfield in “The Catcher in the Rye.”

The Decatur Book Festival, which kicks off Friday, August 31, and runs full tilt Saturday and Sunday, September 1 and 2, would knock Caulfield’s socks off. You not only get to meet authors — sometimes briefly while they sign your books, sometimes just bumping into them on the streets of Decatur for an impromptu conversation — but for a lucky few, you can have your favorite writer all to yourself for an hour, along with adult beverages. Book the Brick is a silent auction to win an author for an hour, and participants include mystery king Michael Connelly, who will toss in an advance copy of his next Harry Bosch novel, due in November; mother and daughter Kathy Reichs (author of the “Bones” book series and producer of the Fox TV series of the same title) and Kerry Reichs, author of “What You Wish For”; and Adam Reed, creator of the cult hit “Archer” animated TV series. Meetups are held at the Brick Store Pub, and proceeds will benefit the Decatur Education Foundation.

“I have imbibed with Kerry Reichs,” jokes festival founder Daren Wang. “She’ll drink you under the table, and smile charmingly the whole time, just like Karen Allen in ‘Raiders of the Lost Ark.’ ”

Connelly, the Reichses and Reed are but a few of the hundreds of authors who will participate this year. They include: This year’s keynote address, by Natasha Trethewey, the Decatur poet and Emory professor who was recently named U.S. poet laureate, is already sold out. Seating is available, however, for the “Kidnote” address by author and musician Jose-Luis Orozco, who will give a free bilingual, family-friendly performance at 4 p.m. August 31 in Presser Hall at Agnes Scott College. First come, first served. Although crowd estimation is difficult because the venues are scattered all over Decatur, Wang estimates that the festival drew about 75,000 people last year. “We’re seeing about a 10 percent jump in attendance every year,” he says. “We’ll probably get 80,000 people this year.”

That will double the estimated attendance of the festival’s first year, 2006. The number of venues, now at 14, almost triples that of  2006.

The festival will have thousands of free printed guides with maps, schedules etc. at the event. Here is a printer-friendly schedule.