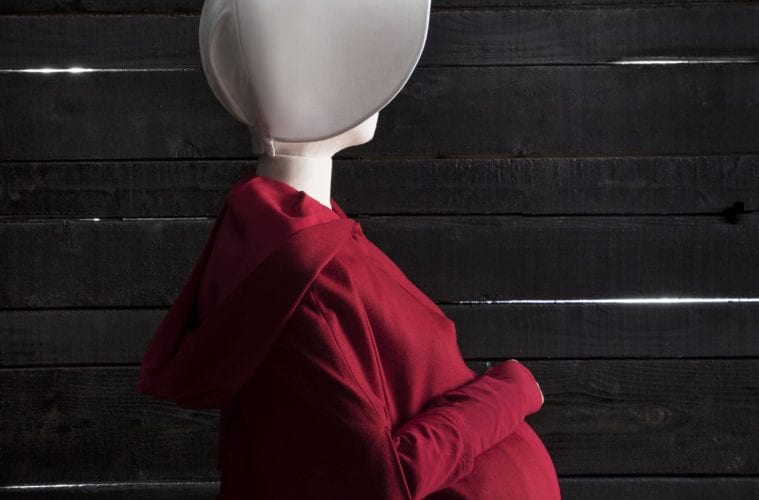 Few contemporary visions of dystopia have made a stronger mark on the culture than designer Ane Crabtree’s austere costumes for The Handmaid’s Tale. A new exhibition at Atlanta’s SCAD FASH Museum explores Crabtree’s dark vision for the clothing in author Margaret Atwood’s nightmarish world of Gilead. As the exhibition prepares to open May 1, ArtsATL caught up with the Emmy-nominated designer to talk about the show, her sources of inspiration and, of course, that dress.

ArtsATL: Can you tell us a little bit about what’s been picked out to be in the exhibition? What will visitors see?

Ane Crabtree: I want it to be an immersive, experiential moment where the viewer who’s walking through this exhibition will feel what it’s like to be a part of Gilead, a new world that’s been created . . . The thing about showing costumes is that it tends to be a bit removed from the audience. What I’d like it to be is more about a personal, intimate experience: sound design and footage from the show and creating tension for the viewer, hopefully all of that will be in play. 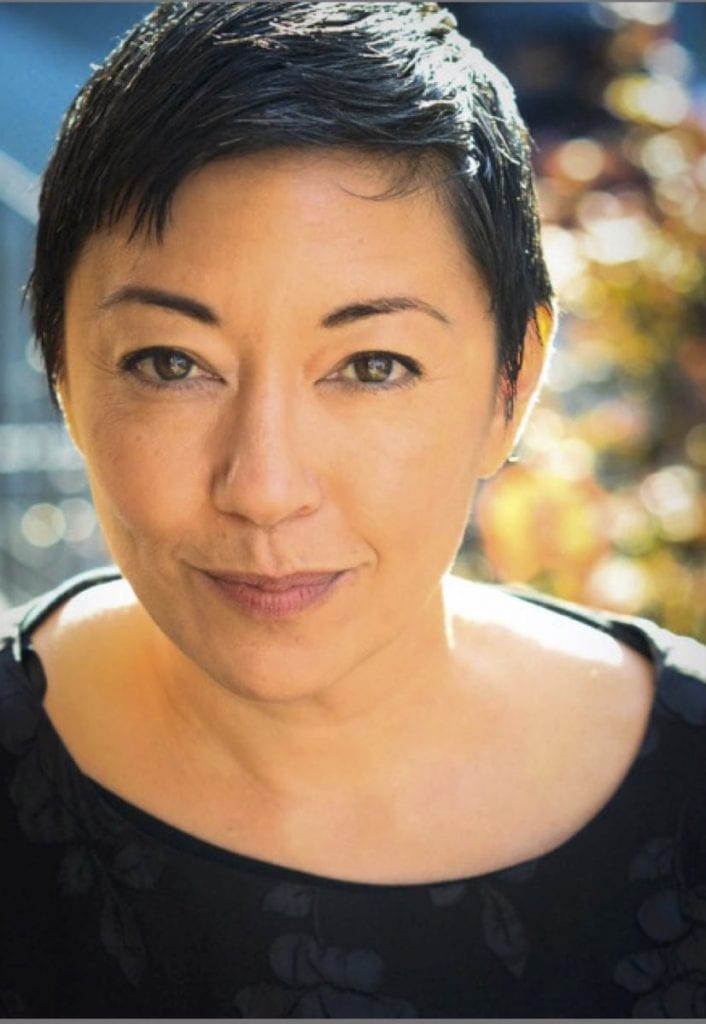 ArtsATL: Take me back to the beginning, when you first got the assignment to create the costumes for The Handmaid’s Tale. I imagine you started with Margaret Atwood’s novel? Where did you take it from there?

Crabtree: I came to this project as a fan and couldn’t believe it when they hired me. I did start with the novel in terms of sketching. The book is shocking; it’s beautiful and surprising to read all over again because it has such relevance and power today, even more so than when I read it when I was 23. But ultimately, I had to put it away. What happens is with TV scripts is that you’re doing two or three or even four at a time. It was very difficult to keep these storylines clear in my head and also not get it confused with the novel. . . .  I do a lot of research. I looked at interesting moments of time for women and for clothing from every decade. And I was looking for things that have lasted. I was looking for a classic line for clothing. I wanted this to be a modern story and not a period piece. I knew I wanted the clothing to look like something people could wear every day, to make it just like a normal dress they have to put on every day like a prison uniform. Keep the wrinkles in, keep a certain flow to it. It hinders certain parts of them where it should and it allows movement for the camera where it should. I’m pretty crazy when it comes to detail. The process was the same for the wives and the commanders, the uniforms of the Aunts and the Guardians and the Eyes. Everybody was in a tribal uniform. The Aunt’s costume comes directly from wartime. If you were to mix war and the church, you have the Aunt. Part of the long tunic came from a priest who was walking across the floor in the Duomo in Milan. I sketched that in my notebook and found the sketch when I was looking for inspiration. 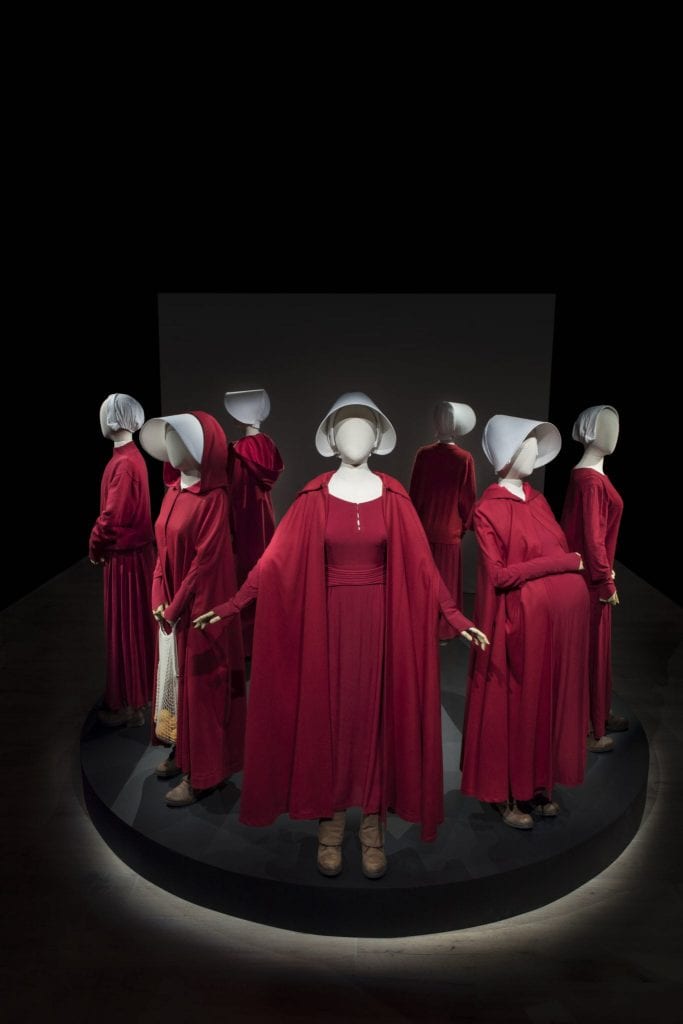 ArtsATL: The costumes for the Handmaids remind me of medieval and Renaissance depictions of women, images of the Madonna, or the Arnolfini Wedding Portrait, that sort of thing. Did you have those sorts of images in your mind when you created the costume?

Crabtree: I didn’t. But now I have to go back and look! I do look everywhere. What I love about that time is the focus on the abdomen . . . I did definitely look at Vermeer, a lot of his paintings of women in headgear. But again, I had to find something more modern. If you pay too much attention to that, it becomes something of the past. We knew early on it could not be an abstract head-covering and dress. We wanted viewers to be filled with fear, psychologically looking in the mirror saying, “Oh, my god, this is now.”

ArtsATL: Did you get a lot of input from Margaret Atwood as you created the designs?

Crabtree: What’s cool about her is that she is so wonderfully open and supportive that she never gave me any discourse about the costumes in terms of what she would have done or what she would like to have happen. I was such a rabid fan that I think I stayed silent a lot at first because I was so in awe of her, and of Daniel Wilson. They both are producers on the show, and they both have such great beautiful minds. To hear them speak, if you’re smart, you sit quietly nearby and gain all of the education you can. Ultimately, I would get an email here or there saying, “Really beautiful job.” And she’s the first one who told me the fashion world was echoing some of my designs. She’s this youthquaker who is such a spirit. I’m in awe of that. She’s so in the world, and aware, and her energy is boundless. She was J-Lo before J-Lo happened. I’ve worked with both of them, and that’s probably where J-Lo gets it. Nothing seems to hinder Margaret Atwood — she’s amazing.

ArtsATL: The Handmaids’ outfits have really made a mark on the culture. Do you recall when you first heard that women were wearing the outfits to protests around the world? What were your thoughts?

Crabtree: I had just returned to the states after being in Canada for seven months, season one, and got an alert from Twitter. I’d never gotten one before, so I had no idea how to answer it at first . . . but it was a woman saying, “We have this plan, and we’d like to run it by you.” The plan was to go to the senate with the [pro-choice] group NARAL in Texas. I went back and forth with them briefly because it was going to happen in a week . . . I kind of just gave them pointers, and they went with it, and it made this huge impact. Since then, it’s everywhere. It’s global. There was one recently in Costa Rica. 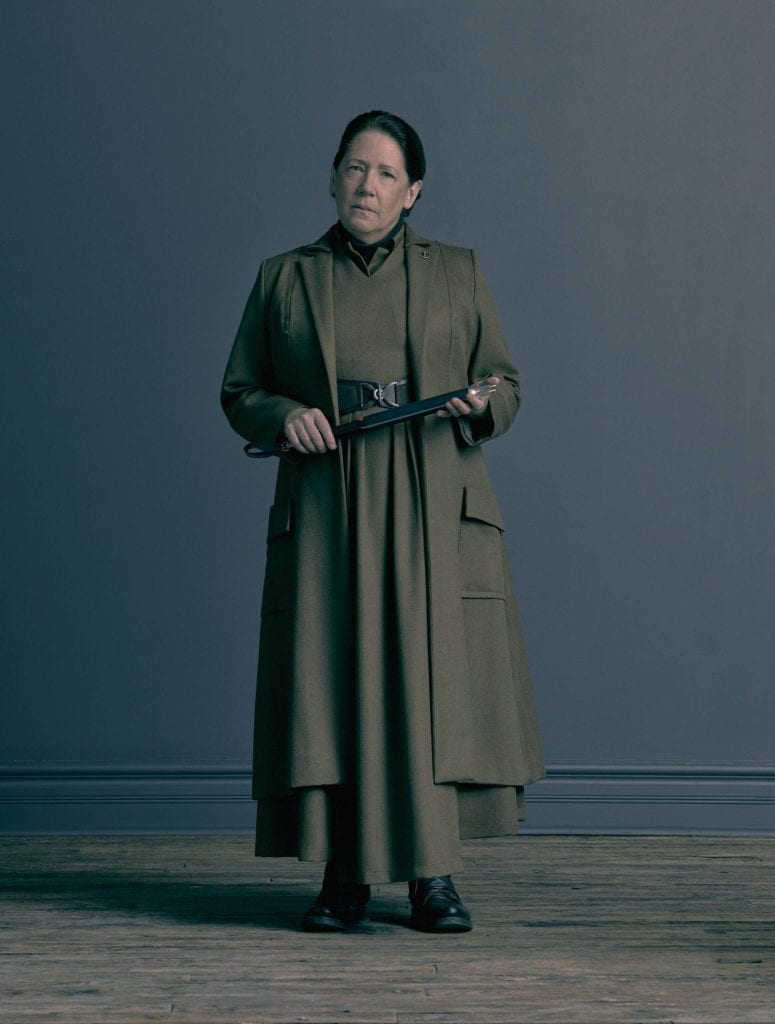 Ann Dowd rocks the lock of tomorrow as Aunt Lydia. Designer Ane Crantree says the hemline was inspired by a priest she saw in the Duomo in Milan. (Photo by Jill Greenberg/Hulu)

ArtsATL: It must be surreal.

Crabtree: It is very surreal and astounding. I’ve had moments in my career, 28 years, where people were inspired by a design from a show, but never has it been so many different facets of politics, fashion, personal expression, Cosplay, Saturday Night Live, RuPaul’s Drag Race (which really excited me because I love RuPaul’s Drag Race!). It’s kind of in people’s consciousness. . . . It’s a design that was meant to oppress women vis a vis the story. The fact that it’s been turned around for women, and men, as a means for their own personal expression is such an incredibly cathartic thing that has never happened in my career before.

ArtsATL: How did you originally get involved in this line of work?

Crabtree: I came about it in a haphazard way. My mother was such a dresser, is such a dresser. And my father, too. I think most people were in the ’50s and ’60s. It was not uncommon for my parents in Okinawa to have their clothes made to measure in Hong Kong. It was a normal thing for people from different walks of life; it wasn’t just for the wealthy. Back in the day, clothes were beautifully tailored. Gents were gents, and women were ladies. I grew up looking at these two beautiful creatures from different cultures dressed in such an elegant way. I grew up in not wealthy standards by any means in the South in the ’60s and ’70s in Henderson, Kentucky. What happens when you’re brought up that way is that your creative imagination is really spurred on. I was this little kid who took over my elder brother’s paper route. I was dressing in his clothes because of necessity. I was always wearing tomboy hand-me-downs. But I was saving my paper route money for Vogue and Harper’s Bazaar. I was elated every month and would tear out every page and plaster it all over the walls around my bed. Now I’m doing the same thing only it’s around my desk, and I’m getting paid to do that. There was always an awareness of fashion and art and all of these things, but it took a director from a museum in Indiana to send me on a museum trip to New York City, and from there I got accepted to FIT and became a fashion stylist. . . . It was a strange, sporadic journey from the countryside to where I am today, but all of that really informs the work. I thank God for that strange introduction to fashion and film.

ArtsATL: Your bio on your website says you were born in South Dakota and grew up in Kentucky. Can you tell me about that? What brought your family to those places?

Crabtree: My father was in the Air Force in Okinawa. He met my mother, who was working in the library on the naval base because she wanted to learn English that way, through books. She met my father, and this was a time before Loving v. Virginia when interracial marriages weren’t even allowed in some places. My parents married at a time when my father’s sergeants and people above him told him he shouldn’t. My brother was born in Okinawa, [and] I was the first kid born in the states in South Dakota. I was three when we moved to Kentucky. I was there ’til I was 18 or 19 years old. . . . I love that I’m from this tiny place, but I had to run away from it first as a teen and young adult to understand the beauty that it gave my life. 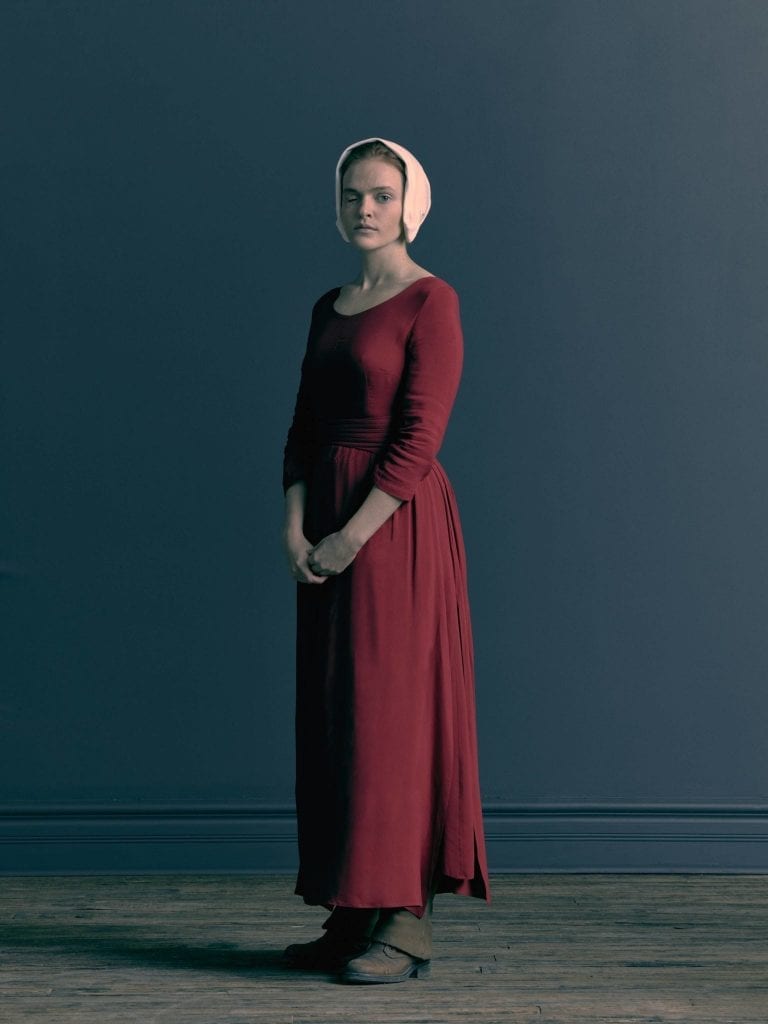 ArtsATL: Any hints about what’s ahead in season two, especially in terms of new clothes we’ll be seeing?

Crabtree: There’s so much. We really tried to up the ante for season two. We tried to come to a place where people would be really excited and stunned by the story. There are the Colonies, which we’ve heard about in Margaret Atwood’s book and we’ve mentioned in season one but never got to see before. That will be there and also at the exhibition. You will see the world of the Econo men and women [poor, working-class people of Gilead], which is a really cool slice of life that they inhabit. I don’t know how much I can say, but there’s a tribal uniform that’s coming twice in the season that’s highly unexpected, a statement on places like Gilead and the children they bring up and the people they become. . . . In season one, I was an architect of Gilead; season two, I’m tearing away those layers. I’m tearing down the walls I built around the actors and showing the frailties, the humanness that is underneath the clothing. The impetus for season two is “the mother” in many different forms. For many different characters, the mother is the seed to the story. You’ll see that in the clothing.

ArtsATL: The exhibition title Dressing for Dystopia made me wonder: If dystopia arrives and it’s the end of the world, what would you want to be wearing?

Crabtree: I can answer that so quick! All of the Econo people are kind of based on what I wear in real life anyway. They’re the urban nomads of this new world and this new society. There’s no Econo store. Everything is made in a factory; there’s limited means. I think that’s how a modern person dresses. For certain, someone like me who’s always on the road and always in different climates, and always dressing for weather and protection and comfort . . . Econo people. Those are my people.