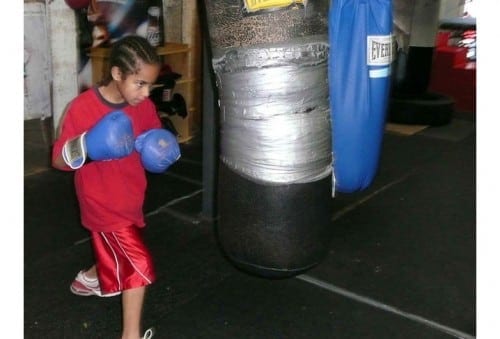 For those experiencing a post-“The Fighter” letdown, sore that it didn’t receive all the Academy Awards it merited, the documentary “Boxing Gym” might offer some solace for its satisfying peek into the pugilist’s ring. The Cannes Film Festival highlight is the final movie in the DecaturDocs film series, screening March 5 at 8 p.m. at Decatur High School. (For more information, go to decaturdocs.com.)

Directed by 81-year-old Frederick Wiseman, one of the pioneers of the American documentary movement of the 1960s, his latest film is pure cinema verité fly-on-the-wall moviemaking. He fixes his camera on the wildly diverse array of people who work out at Lord’s Gym in Austin, Texas. Lord’s has them all: chubby, fit, rogue single male, Latino, white suburbanite, hipster, college kid, gym rat, mommy with baby, working class and yuppie. Wiseman’s portrait of gym-as-laboratory-for-human-interaction makes a fleabag sweat palace feel like the most vital, meaningful place on the planet. There is great tenderness and reflection in his approach, whether he’s observing a gruff-looking palooka socking away at a punching bag and then turning around to coo to his little daughter in a baby carrier behind him, or the simple, pure acts of fraternity offered in the conversations and shared training exercises of the gym regulars.

“Boxing Gym” is the kind of film that makes you want to throw your arm around humanity and give it a big, long hug. Wiseman’s usual documentary practice is about as far from the look-at-me, goading Michael Moore or Morgan Spurlock approach as you can get. As in all the films he has made over the past 30 years, Wiseman provides a record; he gives us access to a place we wouldn’t ordinarily go and allows us to settle into it as if it was a long, relaxing soak in the bath. He has delved into the world of the Neiman Marcus department store in “The Store” (1983), a mental institution in his still-shocking debut, “Titicut Follies” (1967), and a string of self-explanatory explorations in “High School” (1968), “Blind” (1987) and “Ballet” (1995).

Wiseman offers documentary as meditation, free of narration or much in the way of storytelling — in place of plot and subplot he employs the long take and the cut — and instead offers up an utterly captivating world through the practice of observation. So we wait and we watch as the boxers spar, pound the punching bag with gestures both ferocious and anemic, and skip rope, lost in the kind of reverie that occurs with repetitious, solitary activity.

The film occasionally records their conversations too, sitting around shooting the breeze between workouts, talking about their Army training, money troubles, philosophies of boxing and — the occasional braggart in the midst — their phenomenal skills. Lord’s Gym emerges as a surprisingly chill, zen sort of place. It’s the last thing you would imagine of a world that has been built up in the movies as a frenetic cyclone of emotional meltdown, physical violence and spewing buckets of sweat, testosterone and blood. Instead, “Boxing Gym” shines a light on the simple loveliness of human interaction and the poignance of people lost in the solemn, silent reverie of their physical labor. You wouldn’t think a film about boxing could make your heart ache for the poetry of the human condition, but it does.

Nothing penetrates Lord’s Gym, save for the occasional bleeding in of a mega-tragedy like the Virginia Tech shooting, which in several moments captivates the gym. Then it’s back to whacking a rubber with a sledgehammer and other “Duck Soup”-worthy training exercises done with a completely straight face: leapfrog (the sight of grown macho men in droopy gym shorts and salt-and-pepper goatees leaping over each other with absolute concentration is both adorable and absurd), ball-tossing and other activities that sometimes make the gym look like an elementary school at recess.

At the center of it all is Richard Lord, a man of calm who seems to set the pace of his gym. His slurred speech and agile physicality attest to a life in the boxing ring, and his patient encouragement gives him the air of Obi Wan Kenobi. Lord meets with potential clients in his office, acts as sparring partner for his customers and, as the film progresses, begins to suggest a parent spending countless hours gently guiding a child on the road to adulthood. It’s clear that many of them never want to leave the nest, addicted to the endorphin rush and the human communion they find at Lord’s.