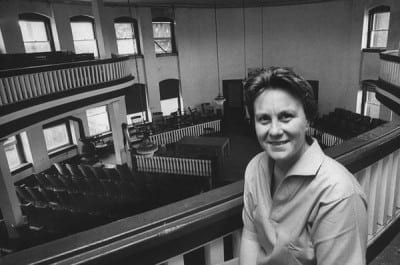 After the sheer poetry of the book “To Kill a Mockingbird” followed by the visual poetry of the Oscar-winning movie, you can only wonder about the expectations that a documentary about them would face. And yet here we have “Hey, Boo: Harper Lee & To Kill a Mockingbird,” a surprisingly poignant and thoughtful examination about the author and a singular work that has alternately made her a legend and an enigma.

Decatur Docs, an intriguing new project spearheaded by Gabe Wardell and Paula Martinez (late of the Atlanta Film Festival), will screen the documentary and welcome its director, Mary Murphy, at 7 p.m. Saturday at the Decatur High School Performing Arts Center. Murphy will discuss her movie and sign copies of her book, “Scout, Atticus and Boo: A Celebration of Fifty Years of To Kill a Mockingbird.” (The Decatur Docs series launched January 8 with a screening of the documentary “Kati With an I.”) 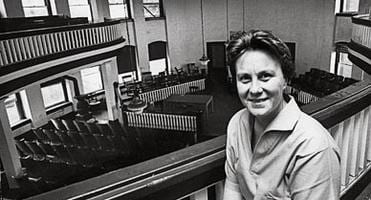 One of the first questions Murphy probably will be asked is how disappointed she was in not getting Lee (shown at left) to participate in the film. The author has avoided interviews since 1964 and has published nothing since her 1960 Pulitzer Prize-winning novel. But one of “Hey, Boo’s” charms is how it provides a fair context for Lee’s reticence, so overwhelmed was she by the fame of the novel and the resulting media scrutiny. As several observers point out, it is perhaps the sequestered Boo Radley more than the defiant girl Scout whom Lee better resembles.

Can you imagine the pressure, asks author Anna Quindlen, of trying to follow up this work that has pretty much defined Southern literature for the past half-century? Indeed, it’s the on-screen observations of other authors, mostly Southern, that give the documentary much of its cultural gravitas, as Murphy enlists everyone from Rick Bragg (“All Over But the Shoutin’”) and Lee Smith (“On Agate Hill”) to Mark Childress (“Crazy in Alabama”) and Diane McWhorter (“Carry Me Home”). Many cite Lee as a major influence on them as writers and tap into the timelessness of the story and its themes of racism, family, culture and morality. Heavyweights such as Oprah Winfrey, Tom Brokaw and Andrew Young also weigh in on the book’s impact, with Young pointing out its influence on the civil rights movement, which kicked into high gear after its publication. 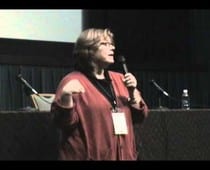 Even though the character of Tom Robinson, the black man wrongly accused of rape, is convicted, “‘To Kill a Mockingbird’ gave us hope that justice could prevail,” Young declares. “And I think that that’s one of the things that makes it a great story — because it can be repeated in many different ways.”

Like many documentaries, “Hey, Boo” threatens to buckle under the weight of so many talking heads, and after a while the observations start to blur into one another. But Murphy rescues the film with a deep sense of historical and especially familial context, the latter most evident (and moving) in an interview with Lee’s older sister, 99-year-old Alice. It’s Alice who respectfully but frankly notes the jealousy that Harper Lee’s old friend, the legendary Truman Capote, felt over the success of the novel, even though the two grew up together in Monroeville, Alabama. Lee helped Capote on research for his seminal work “In Cold Blood,” but Capote never got over the fact that “To Kill a Mockingbird” won a Pulitzer Prize and “In Cold Blood” didn’t. Others are unsparing in their contempt for Capote, with McWhorter dismissing him as a psychopath.

Murphy ends the film on a grace note, a discussion about the key line in the book and movie that serves as the documentary’s title. That this discussion can be almost as tear-inducing as the work itself underscores the power of a well-placed word. The selection of “Hey, Boo” for screening suggests that Decatur Docs has a keen eye for what moves you.