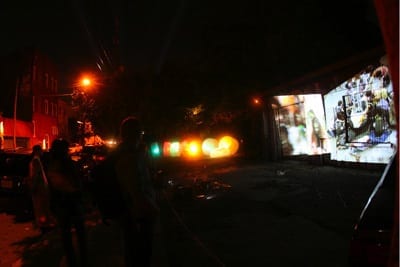 Vampires may be the horror-film hotties right now, but zombies rule the real world. Ask Stan Woodard. Soon after an evening of B-movies piqued his interest, the Atlanta artist started noticing them everywhere.

First came the zombie banks, discussed as the government’s Asset Recovery Plan got under way to prop up failed financial institutions. “These banks are dead but don’t know it,” Woodard said, “but they continue to consume resources that might otherwise be used for broader benefit to society.”

Then he heard about zombie computer viruses, which take over computers for nefarious purposes, and zombie highways, which are unneeded roads that prevent the construction of needed ones.

Woodard decided to share his fascination — and, apparently, ours — with the idea of the walking dead.

Thus, a day-long Zombie Symposium on Sept. 12. Here’s what’s planned; get the details on the all-things-zombie Web site:

“The Zombie Perceived: Religion, Media, Society.” A panel discussion that will consider, among other things, its roots in African-diaspora religions and zombie horror films of the 1950s and ’60s.

Dance of the Undead, a dance party at the Graveyard Tavern in East Atlanta Village.

The undead never die. “We Are Survival Machines,” a project by Carl De Salvo and David Holstius, will appear at Le Flash-Atlanta on Oct. 2.