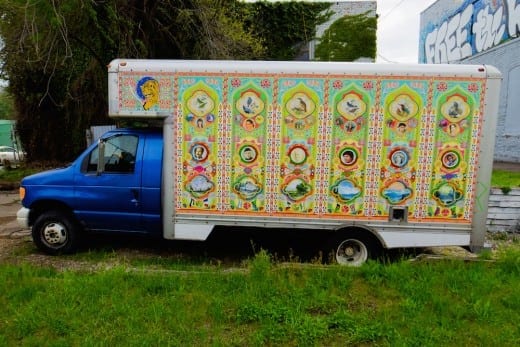 In five years Dashboard, a curatorial organization founded by Courtney Hammond and Beth Malone, has grown from an Atlanta enterprise to a national one.

Malone and Hammond started Dash to showcase Atlanta’s emerging artists and experimental work. They also introduced Atlantans to the possibilities of marginal neighborhoods by holding their shows in abandoned or long-unused spaces.

In 2013, Dashboard’s role as an arts incubator landed it among the five alternative Atlanta organizations to receive a $30,000 Rauschenberg Foundation SEED grant.

This year, Dash expanded its reach to the Motor City with Detroit Boom City, an exhibition held in a vacant former pickle factory, which highlighted Detroit artists’ interpretations of their city alongside four national artists who made work based on first impressions of the neighborhood.

Rachel’s Killin’ It, an exhibition that brings together work by eight artists with whom they have worked, is on view at the Zuckerman Museum at Kennesaw State University through July 26.

On the occasion of this retrospective, ArtsATL sat down with Malone and Hammond to talk about their evolution.

ArtsATL: Was Rachel’s Killin’ It always intended to be a Dashboard retrospective?

Courtney Hammond: Zuckerman asked us to do a retrospective of Dash about one and a half years ago. We’re five now, which means that when they asked us, we were 3 1/2 years old. We thought, “That’s great, but is it appropriate to have a retrospective yet? We’re working so fast currently and we have so many things planned, what if it’s a retro-current-future-spective?

And then it became a retro-future-introspective because it really did help us to look at how we got to where we are now. A lot of it has to do with the way Beth and I bullheadedly go through the world trying to be naively brave. We tend to work with people that have that same mindset and support that big appetite.

I think that’s why we like to work with installation and performance art. There’s always an element of risk. You never quite know what’s going to show up. Things always mutate and change. We always expect things to be nothing like we expect.

Hammond: Everybody’s scratching their heads at some point during the installation. The artist is scratching his head thinking, “How do I impact this space the best?” It’s a performance in itself.

Malone: I think about [Nathan Sharratt’s] piece at Zuckerman. [A 100-by-20-foot inflatable sculpture that couldn’t hold up against the summer storms that preceded the opening. Sharratt turned the attempt at installation into a performative video work instead.] Everyone was heartbroken at one point and everyone was inspired the next minute.

Hammond: [The Zuckerman staff members] were all in it with us for three days in 100-degree heat trying to figure it out with the afternoon storms coming out of nowhere. Two days before the opening, we blew it up one last time and all of us sat and watched it deflate, kind of like a funeral. It was an amazing experience.

ArtsATL: The stated theme of the show is empathy and appreciation of others’ work, values that Dash seems to hold dear. Where does that come from?

Hammond: Who is tenacious enough that if we weren’t there, they’re still gonna make it anyway? We’re just a conduit. We decided a while ago we’re not going to work with people who, if we’re putting our heart, soul and energy into something big and bad for them, if they aren’t going to do something amazing with it.

ArtsATL: How did the Rauschenberg grant change Dash?

Malone: It was a three-year grant with $10,000 given per year. We still have a relationship with the foundation and will remain connected to them. There have been numerous ripples from that grant for us — we’ve worked with other SEED recipients in Detroit and New Orleans. In September we’re presenting work by Kirstin Mitchell, Erik Thurmond, Michael Oliveri and The Young Never Sleep at Antenna Gallery/Press Street in New Orleans. In turn, the group will produce an exhibition in Atlanta with Dash in November. ​

ArtsATL: What is the backstory of Detroit Boom City?

Malone: We were invited to do an exhibition in Detroit by the Ford Motor Company Fund. I befriended Shawn Wilson a few years ago on a panel about innovation when he was still the head of Usher’s New Look foundation​. When he took a job at Ford, he invited Dash to come produce an exhibition to shine light on some of Detroit’s vacant space and highlight the city’s unyielding sense of social entrepreneurship. We worked there for eight months preparing and eventually partnered with 24 local businesses, eight local artists and four non-Detroit-based artists, including Michi Meko from Atlanta.

ArtsATL: How much money did Ford Motor Company provide?

ArtsATL: How has your thinking about your organization evolved?

Malone: We realized about a year ago that Dash is not about the city or geography or these vacant spaces. It’s about this network of artists that we’re putting together. There’s been this ripple effect after shows, not only with space and community, but with the artists providing more opportunity for each other.

We realized that the network is by far the most important thing that came from what we’re doing, so we thought, let’s pay homage to it.

ArtsATL: Can you give an example of this ripple effect?

Hammond: We brought Melanie Manos, Osman Khan, and Ben Wolf down from Detroit for Rachel’s Killin It. Khan’s artwork Road to Hybridabad literally transported Ben’s piece. Ben was in Atlanta for a week and spent an impromptu residency at [Dash artist] George Long‘s studio in Roswell. Ben has invited George and Mike Stasny to present a project at his monthly event Consensual in Detroit.

The ripples for Dash since Boom City in Detroit: we were encouraged to apply for a Knight Arts Challenge in Detroit. We did. We’re a finalist. Ford has invited us to apply for another project grant, which we will. And Michi Meko’s career is soaring in Atlanta and elsewhere — we’ve presented his work twice this year in Detroit and Atlanta. [His solo show at Alan Avery Art Company runs through August 8.]

ArtsATL: Why did you name your next show after a highway? [The Dixieland Overland Highway once served as the main vehicular artery between California and Georgia].

Hammond: The highway goes through eight states and connects over 144 cities. We were thinking about how the East Coast is connected to the West Coast. I think we wanted it to be very literal.

Malone: It really is amazing to me that the very first conversation we had about Dash was to travel the country, and maybe the world together, looking for artists. It took us five years to get there, but we are.