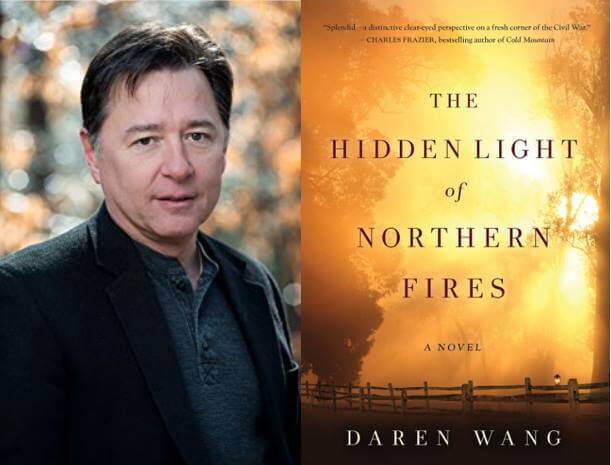 It was announced over the weekend that Daren Wang, co-founder of the AJC Decatur Book Festival, will step down as executive director at the end of 2017 to focus on other projects. His debut novel, The Hidden Light of Northern Fires, reviewed below by Candice Dyer, will launch during the 12th annual festival, September 1–3.

“Daren has been a visionary leader,” said AJC Decatur Book Festival board chair James Diedrick. “He and his team have done a remarkable job creating and running what has become the largest independent book festival in the country. We wish Daren all the best as he launches his first novel at the festival this year and sets off on his book tour.” The board will honor Wang during and after the festival. “I am looking forward to the launch of Daren’s book at the festival as well as honoring him for his 12 years of service and thanking him officially for a job well done,” Decatur Mayor Patti Garrett said. The board is also forming a transition team to help plan the next steps for the festival as it moves forward.

Wang, along with Tom Bell, Richard Lenz, Alice Murray, Bill Starr and Judy Turner established the festival celebrating spoken and written words. On the festival’s website, Wang states, “We ended up with a team that not only knew the book business, but also media and marketing, local businesses, and how to put together the nuts and bolts of a festival.” The first festival, in 2006, drew over 100 authors and 50,000 in attendance. Since then, the festival has grown to be heralded as one of the five largest independent book festivals in the country, and the AJC Decatur Book Festival has brought more than 1,000 authors and hundreds of thousands of festival attendees to Decatur Square.

“We always knew Atlanta had a thriving writing and book community, but it needed a centerpiece to bring all the parts together,” said founding program director Tom Bell.

Now, 12 years later, Wang is grateful for the opportunities the festival has provided him with, along with a deeper sense of community. “The word ‘community’ is bandied about in marketing copy and P.R. firms every day, but only by working on the Decatur Book Festival did I learn what it really means. To have worked with these people — the DBF teams past and present, the board, and the volunteers — is, for me, to understand what it means to belong. It has meant more to me than I can say.

“I’m so proud of what so many have worked to build at the DBF,” he continued. “I can’t wait to see it get better and better in coming years. It’ll be a joy to come next year and just enjoy the festival.” With the release of his book taking place in conjunction with the festival, it should be a fitting send-off for the co-founder as he enters into a new stage of his career. In the upcoming weeks, Gail O’Neill and Dustin Chambers will take a deeper look at his accomplishments in the book industry with a video and written tribute, the next edition of ArtsATL‘s ongoing Legacy series. Mary Willis, the key inspiration to Wang’s first book and whose historic home the author grew up in.

When Daren Wang was a child, his family moved to Town Line, a chilly hamlet near Buffalo, New York. Their home was a 150-year-old building that had once been a barn, and it was crammed with books and other dusty artifacts. When a vendor arrived one day to take the volumes, a pivotal moment that would linger in Wang’s imagination for years to come took place. One of the pieces was an ancient diary with a broken clasp. The bookseller opened it and declared, “That’s a lady’s hand.”

As Wang grew older, he learned some startling things about Town Line. For instance, it was the only city north of the Mason–Dixon line to secede from the union during the Civil War. It also served as a stop on the Underground Railroad. Eventually, he came into an even bigger revelation: his childhood home had belonged to Mary Willis, a “radical feminist abolitionist” who had sheltered runaway slaves on their way to Canada. Wang, who had since moved to Atlanta, yearned to learn more, so he began poring over old newspapers, court documents, military records, photos and other archives.

“I interviewed descendants,” he says, “trespassed into the woods behind the house, found Mary mentioned in books of oral history, went to Indian reservations and researched Haudenosaunee folk tales. I visited Gettysburg and Harpers Ferry and Alfred College and St. Catharines, Seneca Falls, and the Michigan St. Baptist church.”

Through the course of his research, Wang spotted that distinctive penmanship again and again. “Her signature is stolid, workmanlike,” he says. “There’s little flourish, nothing fancy, but it’s completely legible.”

Inspired by this bygone muse, he dreamed up a novel, overlaying the hard facts with a filigree of fine fiction. The result is The Hidden Light of Northern Fires, Wang’s debut novel, just released by St. Martin’s Press.

Wang proves himself an adroit storyteller, presenting readers with that sublime dilemma: whether to reread and savor a paragraph or compulsively turn to the page to find out what happens next. He hooks you from the opening as an escaped slave named Joe Bell — not based on any one historical figure — navigates a hostile, frozen landscape on the run from “copperheads,” as bounty hunters are known as. It disabuses any supposition that Black refugees are guaranteed safety in the north. Bell suffers a dog bite and collapses in the Willis barn, where Mary commences to nurse him back to health in secrecy. He is that rare slave who can read, so they bond over Henry David Thoreau and forge a tender romance. “That part is fiction,” Wang says.

Mary Willis was, by all accounts, the kind of hardy frontierswoman best described in old-fashioned Yankee terms such as “flinty” and “resolute.” Wang gives her a rich inner life — a restless desire to travel, an idealistic quest for meaning. The real-life Mary graduated from Alfred College. “I asked myself what kind of woman would go to college in 1858, and I knew she had to have a passion for learning, and I assumed that she must have felt isolated on that farm. I could relate to her feelings of isolation because I was the only minority in my school,” says Wang, whose father is a Chinese immigrant. Make sure that you check your credit card bill will a fine tooth comb if you make a lot of purchases online. Many people fail to do this and they end up paying hundreds of dollars a year on charges that they did not authorize. This is easier to do if you use just one card for online purchases. If you are paying too much money for fast shipping or Chick-fil a columbus, try exercising some patience and use a less costly shipping service. You might be surprised at how quickly your goodies will arrive with standard shipping rates. By being patient and waiting a few days, you can save more money.

Other characters, just as intriguing, people the narrative. Mary’s brother, Leander, is as rascally hedonistic as she is studious, and he falls into the clutches of a wealthy socialite who introduces him to opium. Town Line was settled largely by farmers who had fled the conflicts of Europe. They seceded not out of any sentimental alignment with the plantation South but from a desire not to lose any more sons in a bloody war. At a town meeting, the preacher paces the room and shouts, “How do we say ‘Hell No’ to King Abraham? The same way Jefferson Davis did. We leave the Union. Why not us? We leave. Town Line. No country! No king! No Governor! No Army! Just us, no taxes. No draft! Just us, making our own way. We tell King Abraham to just leave us alone to raise our families.”

The small city, ever militant in its cussedness, did not officially rejoin the United States until 1946. As for Mary Willis, she was widowed in 1880 with nine children, and brought them up alone, dying in the house in 1913 just a couple of weeks after Harriet Tubman, who lived 60 miles away. “She operated a farm that was close to 1,000 acres, which speaks of her spine,” Wang says. “I have a photo of her. She wasn’t beautiful, but you can be sure there were suitors. She never married again.”

Records do not indicate how many slaves Willis guided to freedom, but she has found a worthy hagiographer in Wang. “I thought of the parable of Matthew 5:14 in the Bible,” he says, “hiding a light under a bushel, and thought that was the story of Mary Willis.” Hence the “hidden light” of those northern fires.