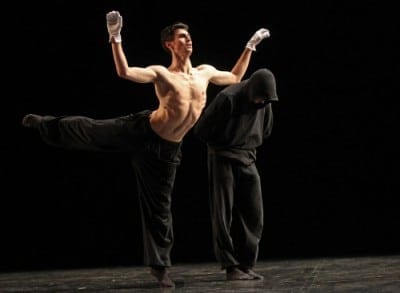 We’re delighted to introduce Chelsea Thomas, who brings a new voice to ArtsCriticATL’s dance coverage. Chelsea graduated from Georgia College last spring, studying mass communication/print journalism, English and dance. She recently moved to Atlanta after spending the summer at Jacob’s Pillow Dance Festival, where she met and wrote about some of today’s most interesting figures in contemporary and modern dance. — Cynthia and Pierre

Aszure Barton is always seeking, always changing. Equally fascinated with the simplicity of the pinky toe as with the indispensable human heart, she is somewhat of a chameleon, constantly investigating and then morphing with the evolving human psyche.

Aszure Barton & Artists, an internationally acclaimed troupe based in New York that rarely tours the United States, will open the 2011-12 Ferst Center for the Arts dance series this Friday night with two distinctive works, “Blue Soup” and “BUSK.”

A scene from "BUSK." (Photo by Vladimir Fedorenko)

Hyper and enthusiastic in person, Barton, the troupe’s director and dance maker, has a reputation for creating deep, thrilling choreography that equally challenges an audience’s thematic interpretation and the dancers’ ability to portray it. Many describe her movement, fluid but geometric, as “whole-body expression,” infused with her technical training at the National Ballet School in Toronto.

For Barton, dance is not only about movement and style; it is about a dancer’s mentality and psychological investment. For her company’s performance at the Ferst Center, “Blue Soup” represents an absurd universe happily contradicting itself, whereas “BUSK” is self-reflective and hauntingly vulnerable.

In a telephone interview from a coffee shop between rehearsals, Barton said that much of her work is influenced by the young, expressive dancers who form her company — many of whom perform in other ensembles. As for “BUSK,” she explained that the “seed of the work was planted” during a residency in Santa Barbara, Calif., in 2009. There, for four weeks before heading home to Canada, the company was greatly influenced by their environment. “[W]e were working in this beautiful space. I definitely recognized the energy there and the difference between light and dark,” Barton told me.

Light and dark is an apparent theme in “BUSK,” taking its clearest form with the thought-provoking black hooded costumes by Michelle Jank, who watched the choreographic process unfold in Santa Barbara. Barton said that the contrast between the city’s “rich life” and large-scale poverty was “shocking.” It caused her to question the idea of personal self-worth and led to the work’s intimate probing and exposed internal inquisitions. The word “busk” stems from the word “buscar,” meaning to search or to seek, and the choreographer explained that she “picked the word ‘busk’ because it’s such a strong word. At this stage of my life I am constantly questioning my place as a person and as a performing artist.”

Los Angeles Times dance critic Debra Levine is among those who have recognized this intense self-awareness. “Set to Gypsy music, ‘BUSK’s’ vivid episodes gently poked fun at the desire, indeed the addiction, of the performer to please the audience,” she wrote. “Sequences featured tricks, effects, magic, contortion and mugging.”

Another frequent theme in Barton’s work is the presence of “hilarity in everything,” the sense that all aspects of life are somewhat humorous, even the tragic. That is why, she says, she immediately embraced Russian composer Lev “Ljova” Zhurbin’s music when Mikhail Baryshnikov introduced it to her in New York. “The reason I have chosen Ljova is because he has a sense of humor in his darkness and a sense of darkness in his humor,” Barton explained. “He shares a similar heart to me and this piece.”

Also displaying a performance-focused theme is “Blue Soup,” which is set to open Friday’s show. The program describes it as a “robust work [that] invites the audience to visit a self-contained, deeply textured and absurd universe of bright joy and dark humor.” Less focused and emotionally psychological than “BUSK,” it is a collection of different segments of Barton’s choreography. “‘Blue Soup,'” wrote Molly Glentzer in The Houston Chronicle, “celebrates the spirit of music and movement through the limbs, balancing the noir feel of ‘BUSK.’”

“It has humor and definitely pulls forth the personalities and idiosyncratic qualities of the dancers,” Barton said. “It’s definitely more of an autobiographical work…. It’s very bright and crazy.”

For some artists, the divergence of French singer-songwriter Serge Gainsbourg’s kooky “Comic Strip” with singer Andy Williams’ more serious ballad might be too far a stretch. But Barton clearly enjoys testing boundaries and taking risks, part of why she is gaining prominence in Canada and elsewhere.

Pairing two works as different as “Blue Soup” and “BUSK” has gathered mixed reviews. But Barton explained that she is captivated by polarity, an idea that continues to push her forward.

After Friday’s performance, there will be a free audience discussion, as part of the “Dance Dialogues” series.