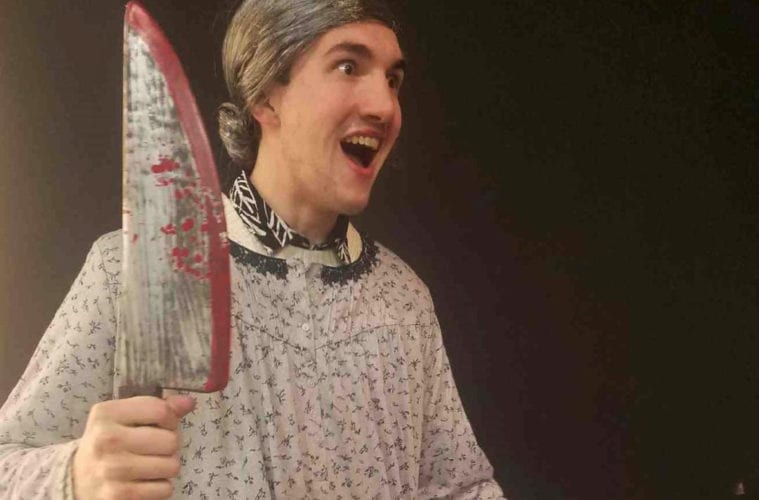 Those willing to accept a bit of carnage with their musical theater should be pleased with the new production from PULP Books & Gallery. Psycho: The Musical (through February 9) is based on the 1960 horror film Psycho, which was directed by Alfred Hitchcock. The musical adaptation retells the story of poor Marion Crane, a secretary on the run after stealing money from her job, and her ill-fated shower run-in at the Bates Motel with Norman Bates and his mother. The twist here is that it features a musical score with songs by Neil Diamond. Now in previews, it opens for a two-weekend run on February 1. ARTS ATL caught up with director and PULP owner Will Eiseman to ask about the tongue-in-cheek parody and the new Atlanta venue.

ARTS ATL: What can you tell us about Pulp?

Will Eiseman: It’s a bookstore that specializes in art, photography and popular culture books. It’s books you won’t find anywhere else — books on circus freaks, architecture, erotica. We have art zines. We sell rare film posters as well as signed prints. It is also a gallery. Inside the bookstore and gallery is a theater that we are doing original work in.

I have been doing this kind of thing a long time. I moved here in May from Charleston, where I did PULP there for little over a year. The rent got too high, so I decided to move. The bookstore opened in July [on 11th Street, between Northside Drive and Howell Mill Road] and the theater in October. We have a 60-seat theater here to show films and stage productions. One of the shows we did there last year was Grrlz Gone Wild, a variety show set in a women’s prison.

ARTS ATL: How did Psycho: The Musical come to your attention?

Eiseman: Someone brought it to my attention when I was in Amsterdam. When I had PULP in Charleston, it was done as a staged reading where we did the music and everything but didn’t put it all together as a complete piece. I look forward to staging it for the first time.

ARTS ATL: What can you tell us about the show?

Eiseman: It’s a dark comedy that follows the movie very closely. The characters are the same: Norman Bates and his mother, Marion Crane, the private detective Milton Arbogast, Lila (Marion’s sister), Marion’s boyfriend Sam and a psychiatrist. The big difference is that we’ve added Neil Diamond songs such as “You Don’t Bring Me Flowers” and “Crunchy Granola Suite.” The music is the same, but the lyrics have all been adjusted to the fit the circumstances. (“He Ain’t Heavy, He’s My Brother” becomes “She Ain’t Deadly, She’s My Mother,” for instance.) If you are a fan of the movie, you should get a kick out of this. If you are a fan of Neil Diamond, you should get a bigger kick.

ARTS ATL: What’s the challenge of putting on a show like this?

Eiseman: Actually, it’s a very simple show to stage because it’s small. Basically it’s the Bates Motel and the cabin. It’s a two-set piece. There have been some challenges such as how to recreate the shower scene, but we decided we didn’t want blood in any of the murders. I’m in a bookstore — I didn’t want to clean it up every day.

Eiseman: All the (theater) work we are doing is original. We are in the branding stage, so want to do pop culture pieces that have instant audience recognition. The show after Psycho is The Complete Works of Quentin Tarantino. All of the dialogue is from his movies, but the subtext is that it’s performed by an evangelical drama club, so the scenes reflect that point of view. We’ll also be working with a group called the Non-Violent Offenders, who we worked with before on It’s A Wonderful Lie, and doing a piece where the cast of Seinfeld performs The Ten Commandments. In the summer, we’ll have the Atlanta premiere of Fail Safe, adapted from the book and film.

As people get familiar with our space, it will be open to the community to do other shows. We encourage people to bring us their ideas.