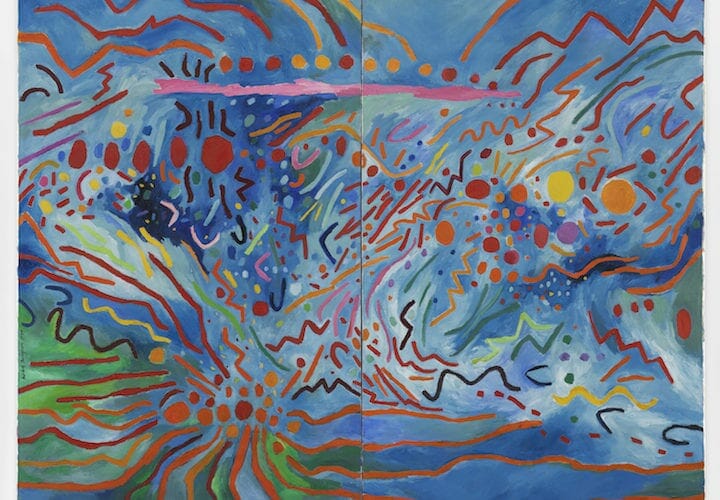 Cullum’s September Notebook: Exploring the fantastical, from The Bakery to MOCA GA

Jerry Cullum’s Notebook is a monthly roundup that highlights some of the most notable art + design happenings in metro Atlanta. Cullum has covered visual arts in Atlanta for decades.

This year is the 100th anniversary of the first surrealist novel (André Breton and Philippe Soupault’s Magnetic Fields, although the art movement wasn’t named until a few years later). Thus it’s appropriate that The Bakery Atlanta is in the midst of hosting The Polymorph Bodyshop, a two-week show of contemporary surrealist art by more than 40 artists from 11 countries.

One of my favorite printmakers, Joe Tsambiras, is represented by two works, and LaDonna Smith stands out as a contributor of conceptually oblique but entrancing objects that more than complement her extraordinary musical improvisation (featured in an extended performance at the September 5 opening). A Bruno Jacobs work in “The Polymorph Bodyshop” at The Bakery. It closes today.

Other events address The Polymorph Bodyshop‘s theme — the problem of surrealism and the body — not just in the nostalgic sense of exquisite corpses and headless women but in asking, “What does the body mean in the 21st century, and what, despite the corporeal misery of the contemporary world, could it become?” Tonight’s closing reception (7–10 p.m.) offers one last chance to explore the question.

The self-chosen gap between the DIY aesthetic of The Polymorph Bodyshop and the original surrealists’ debt to classical styles of painting and writing raises interesting questions about how multigenerational art movements evolve. Let me call attention to a couple of seemingly unrelated exhibitions that, nevertheless, operate on terrain that overlaps with surrealism — the marvelous, the unconscious and the wish to explore both topics on fresh, contemporary terms.

Ben Smith uses a visual language that the original surrealists would recognize in the retrospective Past and Present at Chastain Arts Center (through October 5). It might be regarded as incorporating surrealism’s quest for the marvelous with a nod to the darkly irrational side of human existence.

Smith began his career making enormous woodblock prints that depicted wizards, shamans and other arcane figures. His work has gone in unexpected directions, and today some of his most trenchant images come in small packages, as intricate drawings in which similar figures form an allegory about contemporary crises from global warming to water pollution to corporate dominance. The poetic visual metaphors remain, but their point has become much edgier.

The surrealist inheritance finds a more contemporary iteration in Dorothy O’Connor’s Scenes (at MOCA GA through November 2). Her photographic tableaux vivants combine mind-bending quantities of real objects related to a theme, and dreamlike replications of fantastic ones — a crank-operated mechanical tornado, for example, or a crocheted ocean — in combinations the surrealists themselves could scarcely imagine. These intricately crowded interior landscapes are inhabited by young women who, in the earliest works (2006), seem enveloped in dreams but more recently actively engage with their improbable surroundings. The sheer excess of O’Connor’s psychologically laden allegories — hundreds of birds in one, or almost as many books, papers and bric-a-brac in others — provides plenty of material to stir our imaginations.

MOCA GA says these photographs tell a story, but it’s more accurate to say that both O’Connor and her viewers create stories from these archetypal images (extracted, the artist says, from her dreams). Thanks to Edwin Robinson’s farsighted donation of each work to MOCA GA as these pieces were created, this show gives us a comprehensive look at a body of work that may have already achieved lasting status as an outstanding example of fantastic realism.

There are other ways to explore realms that seem fantastical, and any number of Atlanta artists have carried on the work of “making the invisible visible,” as learned from Spelman College and Atlanta College of Art professor Mildred Thompson.

Thompson (1936–2003) investigated the topic — which, for her, encompassed both physics and metaphysics — not just in her abstract painting and printmaking but in essays, lectures and ultimately in electronic music and computer art. Mildred Thompson: The Atlanta Years continues at Spelman College Museum of Fine Art through December 7.

The exhibition presents a representative sampling of Thompson’s work from her 1986 arrival in Atlanta to her death. It also surveys the ideas she synthesized from many sources to create an aesthetic and a personal philosophy. There’s much more to be said and seen with regard to Thompson, but this show is a concise introduction, excellently curated by Melissa Messina, a Mildred Thompson Estate curator, and Andrea Barnwell Brownlee, Spelman Museum’s director.

The exploration of interiority is further reflected on Miami Circle, where Elyse Defoor’s Uncloaked takes on the theme of female personhood breaking free of outgrown restrictions (at Thomas Deans Fine Art through October 5). Cicadas and other creatures burst out of shells that no longer fit them, literally adding uncloaked figures to the mix. Down the street, Bill Lowe Gallery is filled with William Stoehr’s immense portraits of suffering humans in Victims — Witnesses — Survivors (through October 18), where text blocks elucidate the plight of opioid addicts, for example, and Syrian refugees. Refugees or migrants are also the theme of Radcliffe Bailey’s work for the Istanbul Biennial (through November 10) — to my knowledge the only global biennial in 2019 to include an Atlanta artist. Bailey is one of 56 artists from 23 countries presenting work that looks at themes of culture and history in response to the Turkish city’s past and present in an immense variety of styles and perspectives. That he chose to represent migrants in a boat listening to the visionary music of Sun Ra constitutes a multilayered symbolism that is a provocative response to the condition of the international crossroads that Istanbul is and always has been.