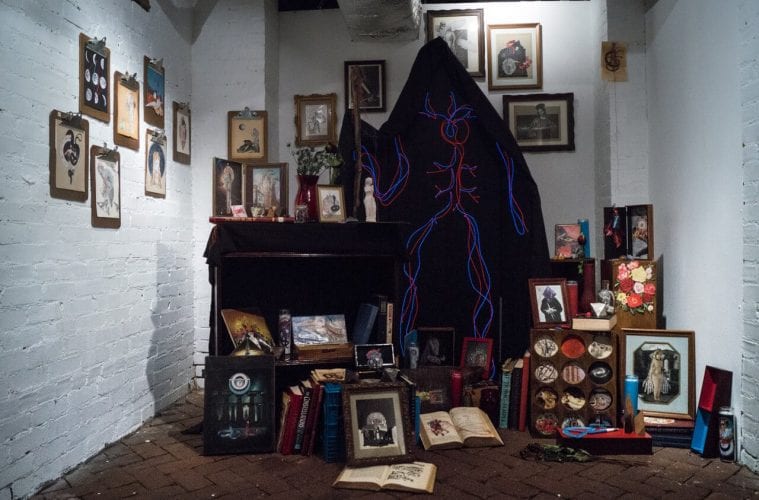 Cullum’s Notebook: Mike Germon invokes the ceremonial past at Whitespec

Mike Germon’s artist talk for Almagest on Saturday, February 10, at 2 p.m. at Whitespec (the project space at Whitespace) will bring to a satisfying close one of the most complexly challenging exhibitions of this still-young year.

The adroitly arranged editing and pacing of Whitespace’s adjacent ground.loop, a video installation by Bill Orisich and Benita Carr, composes a mesmerizing mystery play out of what might seem like overused modernist symbols of lightness, heavy-footedness (literally) and descent into the depths. Germon’s installation, by contrast, takes thoroughly familiar religious symbols and scientific diagrams and reassembles them into the sacred objects of an openly fictitious religious cult. The former installation is as somberly serious as the latter is somberly playful. There is nothing in the narrow, windowless confines of Whitespec to reveal the nature of the cult for which this is presumably a sort of temple — certainly the far end of the space is arranged like an altar, and the rack of objects in the foyer resembles one of the home altars of religions of the African diaspora. The arrangement of miniature bottles of liquor, semiprecious stones and holy cards from other religions, however, is utterly different. For the most part, in Germon’s collaged wall pieces the divinities of Greco-Roman antiquity replace the saints of Catholicism used in African-diasporic religious practice. These artworks combine tangles of serpents with images of the planets and anatomical diagrams of the head and neck in a syncretism that resembles the style of this centuries-old way of wildly combining symbols, but they do not adhere to any historic syncretistic religion.

Germon’s installation bears a physical and spiritual kinship to the reconstructed temple of Mithras that Bloomberg has just opened to the public in the temple’s original underground site beneath Bloomberg’s new London headquarters. While few of us will ever set foot in that archaeological site in England, it is documented in an enlightening video that reproduces the high-tech immersive experience designed to give visitors the feeling of being in the midst of Mithraic worship. However, archaeological consultant Sophie Jackson makes the point in a CNN news story that we don’t really know what this ancient mystery cult was all about — we only have its temples and their symbolic statues, some of which seem to refer to ancient astrology.

Omitting such documentation for his fictional creation, Germon has provided only a teasing text that refers to “a ceremonial altar from an imagined religion based on the human cardiovascular system where redemption is pursued via a metaphorical journey from Earth to Mars within a geocentric solar system.” If you want further details, the artist’s talk, or your own talk with Germon at some later date, is the only way you’ll find them out. And that is remarkably parallel to the situation in which historians of religions find themselves with regard to mystery religions in general, except that there are no practitioners going on the record, only oblique allusions in ancient texts.

Anyone who wants to pursue further the topic of syncretistic religions in Greco-Roman and Egyptian antiquity might contemplate some of the evocative objects in the Michael C. Carlos Museum, where a statue of Isis-Aphrodite represents the fusion of Greek and Egyptian deities in the age of Alexander the Great. Those less committed to that topic might want to check out the Divine Felines of the Carlos’ current exhibition on the role of cats in ancient Egyptian religion. Of this, there is much more to be said, but later, since that show runs into autumn.