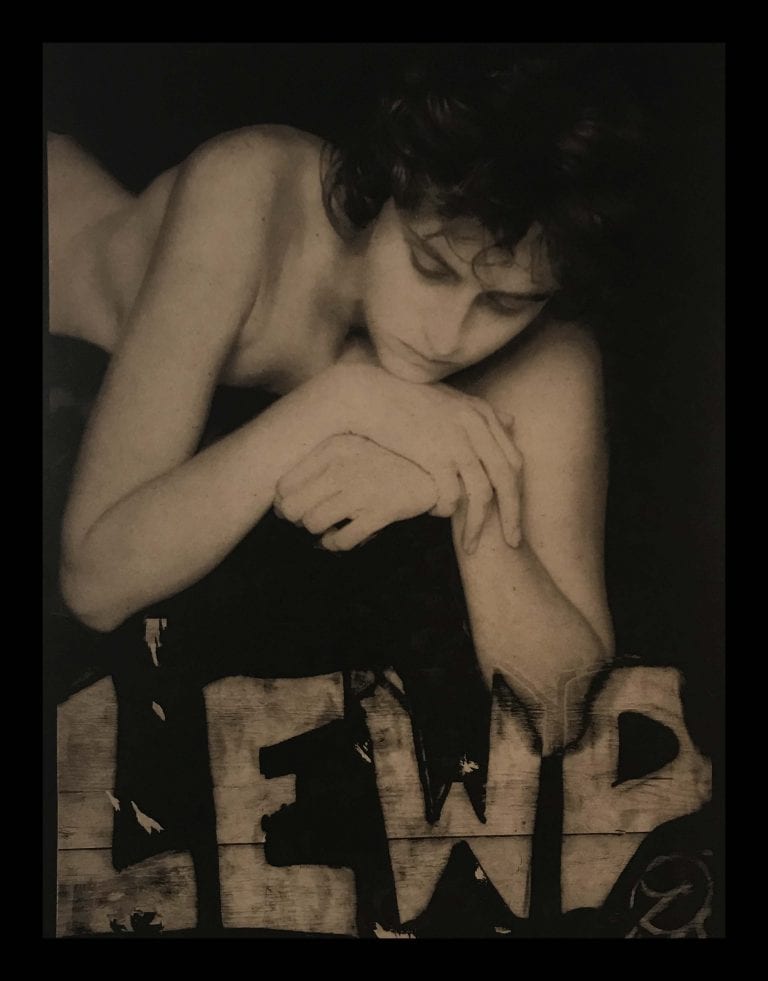 Josephine Sacabo’s romantically sumptuous, sensuously spiritual photographs have long been celebrated in New Orleans, her current home city (though San Miguel de Allende, Mexico, also has a claim to that title), and her work has gained increasing recognition elsewhere over her 36-year career. Her first solo exhibition in Atlanta is a new body of work entitled Tagged, which opens at EBD4 with a lecture on Thursday, October 11, with a reception on Saturday, October 13. (Full disclosure: When an earlier exhibition venue proved unavailable, I volunteered to locate the present alternate space, having admired Sacabo’s work for years. The Stuart A. Rose Manuscript, Archives and Rare Book Library of Emory University would also appreciate mention of their sponsorship of the lecture occurring at EBD4, so I’ll oblige them here.)

The Tagged series is Sacabo’s affirmation of female personal identity in the face of the depersonalizing graffiti she confronts on the daily walk from her home to her studio. Her characteristically romantic portraiture appears overlaid with, and negating, the rude words and drawings, some of them too obscene for reproduction in some social media or print outlets. The use of exquisite technique and fine paper (photogravure, printed on Sekishu Tsuru tissue, Chine-collé on Somerset paper, to be exact) provides a paradoxical, affirming contrast to the relentless negation of women in the hastily written wall slogans, which should never be confused with graffiti art.

The exhibition will also feature the launch of trade-edition versions of two of Sacabo’s extraordinary artist books combining, in this case, individually printed photographs with handset-type texts from the mystical poems of 17th-century Mexican contemplative and student of science and philosophy Sor Juana Ines de la Cruz (in Lux Perpetua) and the fiction of 20th-century Brazilian experimental novelist Clarice Lispector (in Beyond Thought). The two women represent different examples of the intellectual strength and spiritual insight Sacabo wishes to celebrate and make known, and these less expensive reproductions of the original books will help accomplish that goal. (An earlier collaboration between Sacabo and her husband Dalt Wonk, Nocturnes, will also be for sale.)

The recent annual Book as Art exhibition in Decatur reminded us that the artistic genre called “artists’ books” incorporates two strains, one devoted to inventive but inexpensive multiples and the other, older one devoted to the creation of luxury objects. Sacabo’s books have fallen toward the luxurious end of the spectrum, but their content is so appealing to less well-off lovers of well-crafted volumes that it is good to see them produced in somewhat more affordable, but still elegant, editions.

The month of Atlanta Celebrates Photography will be filled with other photo-centered exhibitions. I am happy that by sheer accident, the opening reception of Forest McMullin’s Late Harvest: On Back Roads in the Deep South show at Thomas Deans, which I mentioned in last month’s Notebook, occurs on October 12, in between the two Sacabo events. Given the emphasis on lens-based media, it seems appropriate to balance the scales a bit by calling attention to a purely coincidental juxtaposition that, to my recollection, is unparalleled in Atlanta: concurrent exhibitions by Scott Belville and Zuzka Vaclavik, two well-known Athens, Georgia, painters who happen to be married to each other.

Belville, I have been informed, hasn’t had a solo show in Atlanta in roughly a decade, which comes as a surprise to those of us who have followed his career for over 30 years. In Painting in Reverse at Sandler Hudson Gallery through October 20, Belville replaces his earlier surreal scenarios with trompe l’oeil paintings of uncompleted paintings on easels (mostly), with convincing renderings scraps of possible additions attached to the canvas with masking tape. The faces and figures thus shown hovering just above the painting itself (complete with shadows when appropriate) add ironic or simply mysterious counterpoints to the elements already presented as part of the composition. Sometimes the juxtaposition is an extremely clever joke, other times it is an obscurely oblique relationship, but always it is a flabbergasting example of technical mastery designed to fascinate the viewer. There is one particularly communicative political painting, but I’ll leave the details for you to discover for yourself.

Vaclavik’s Lucid at Poem 88 Gallery and Bookshop through October 20 is as deceptively simple as Belville’s is deceptively complex. (And I should point out that I use “deceptive” here in a playfully deceptive way.) Loosely influenced by Matisse’s famed paper cutouts, these square acrylic on canvas paintings are designed to allow the owner to rotate them into whatever position they find most pleasing. For once, the wisecrack that the painting would look better upside down has been blunted by the artist’s intention.

Vaclavik’s conscious incorporation of strategies of design into her painting practice has been complemented by the use of her similarly patterned design for a line of clothing by Magdalena Muszynska, produced in Austria for Ma Ma Mu. Vaclavik’s part of the three-artist project will be sold in the High Museum of Art’s shop during the Yayoi Kusama exhibition, which opens November 18. (Here again, we find the relationship between the unique art object and affordable multiples by the same artist.)

Because October in Atlanta is a long buildup to Halloween, I can’t resist ending this month’s Notebook by calling attention to the ghostly wire figures that Atlanta artist Laura Lewis created for Fernbank Museum of Natural History’s Woodland Spirits installation, up through November 11 on the WildWoods nature walkway behind the museum and in the adjacent Fernbank Forest. Meant as a fun, family-friendly, atmospheric homage to the season — as well as a way of calling attention to the largely unnoticed ruins of a 1930s formal garden that look like something much, much older — the show effectively combines popular appeal with a contemporary artist’s goal of transforming an environment (Lewis has a track record of public art installations). As I’ve been implying throughout this edition of the Notebook, the barrier between “high” and “low” art has long since become permeable, and the boundary-crossing goes both ways.