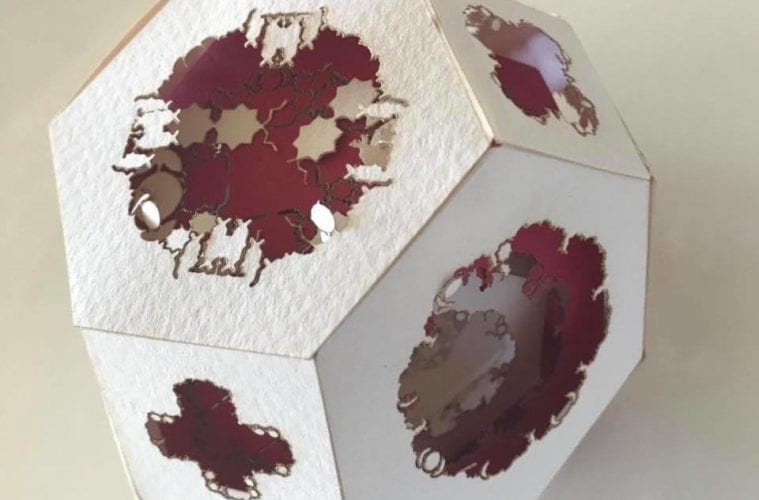 Cullum’s Notebook: May brings shows not to be overlooked

There are only a handful of days left (the shows close this Friday, May 11) to see some outstanding work at Mason Fine Art, from which I’ll single out only three solo exhibitions or extended presentations.

I was particularly struck by the MFA shows of Alea Hurst and Linda Italiano; Hurst’s trademark combination of patterned backgrounds with fashionably attired figures wearing masks from around the world have made her something of a local superstar already. Italiano’s hauntingly edgy meditations in black and white are likewise quite certain to be seen again, and often. I would suggest that you look closely at an artist at the other end of the chronological spectrum (I mix metaphors here without malice aforethought) who already occupies a place in art history. Sammy Peters is a flabbergastingly productive Arkansas abstract painter who has been violating aesthetic norms in valuable ways for half a century or more, maintaining an energy and variety that led critic Peter Frank to describe Peters’ approach as “straddl[ing] the material and the pictorial, delight[ing] in sensuous skin and color relationships at once dissonant and delicious, and combin[ing] the decorative and the narrative without telling stories or striving for retinal gratification,” a description so verbally imitative of Peters’ elusive yet consistent way of putting a painting together that I wish I had written it. Peters’ combination of broad patches of color and sketchily loose grids makes for a readily recognizable style, but after all these years, Peters still approaches each painting with a sense that there might be a different way of doing this. His works of the last six or seven years contain no elements we haven’t seen before in his work or that of other painters, but Peters is still accomplishing unexpected things with familiar components.

Over at MOCA GA, I wish to highlight an easily missed show downstairs that closes on May 19: John Dean’s photo portfolio Cool, Clear Water. The show begins with one of the most articulate artist statements I have read recently (reproduced on the exhibition web page as well as the exhibition wall), discussing the cultural ubiquity of water and the vessels used to contain it, along with the symbolic meanings they carry. Dean then leads off the portfolio itself with a series of black and white prints (piezography carbon pigment prints, to be precise) seemingly capturing the moment at which a container representing one or another moment of world culture is about to be filled with water captured in mid-pour from a glass or pitcher from a different historical epoch. This formal translation of kinetic grace is succeeded by a sequence of color pigment prints that capture the condition of water in on-site situations ranging from major lakes to a windmill-shaped kiosk marketing bottled water, plus one documentation of water’s former presence in a dry creek bed. The elegance we associate with Dean’s explorations of proportion is at work throughout, creating a sense of continuity and balance within these varied investigations of water in its many manifestations.

I’ll end this month’s column with a few notes on striking shows at galleries that, despite their central location in their respective downtowns, are all too likely to be overlooked.

At Different Trains Gallery in Decatur through June 9, M.C. Escher needs no introduction beyond Professor Schattschneider’s observation in an NPR interview that Escher remains a suspect figure in respectable art history for his sense of playfully pointless paradox and impossible perspectives (whereas playful strangeness per se is a guaranteed crowd-pleaser, not necessarily a sign of lack of serious intent — see Giuseppe Arcimboldo and Hieronymus Bosch for examples). Many of the mathematics-oriented artists who form the “plus” in the gallery’s M.C. Escher + show, however, are in need of a wider introduction.

Akio Hizume has an international reputation for his architectural forms following basic mathematical proportions (although his interlocking bamboo rods have little enough kinship with what European artists did with the Golden Ratio and the Fibonacci series). Different Trains has plans for further collaboration, so I won’t elaborate here on the few miniatures available in the exhibition except to remark that they resemble maquettes for Hizume’s monumental projects in Zürich, São Paulo, and elsewhere.

Erin Sledd has multiple identities as lecturer in English at Kennesaw State, graphic designer with her own design firm and creator of octahedron paper objects that incorporate references to everything from the mathematical relationships of the octave to Mumtaz in the garden (the consort of the Mughal emperor who commissioned the Taj Mahal as her burial place), with stops at Hermes Trismegistus and other figures from history and mythology who were/are poised at the juncture between art, religion and science. She adapts sacred geometry to not-quite-secular-or-sacred purposes; her Breath of the Compassionate series, partly represented in the Different Trains exhibition, uses traditional belief and practice as a metaphoric starting point for outcomes only loosely related to tradition. Just as with Alea Hurst’s mash-ups of anthropology and fashion design, Sledd is engaged in a species of intellectual and aesthetic hybridity that, in her case, is meant to be anything but precious or one-of-a-kind; her biographical note concludes with “As [Piero] Fornassetti said, ‘A thing does not become less beautiful because it is reproduced 20,000 to 30,000 times.’”

The numerous other artists in various media (including Victor Vasarely) represented in this exhibition suggest that viewers interested in art that derives directly from mathematics will find much to like. Despite its downtown location, the city of Atlanta’s Gallery 72 frequently fails to capture the attention of passersby. The scene through the gallery windows is somewhat more attention-getting in the case of the video projection and stack of black and metallic belts from Elyse Defoor’s Unbridled, a dramatic allegory of cultural restraint and personal liberation. The show begins with the Relics of Marriage photographs of wedding dresses and the cast-off dresses themselves in one gallery and ends in the facing gallery with actual sculptures and photographs of black metallic dress sculptures (the title Exuvia suggests the sloughed-off shells of insect larvae) and, in the center of the gallery floor, a large, stacked pile of belts. If the white wedding dresses carry associations of happiness and hope, the belts bear associations ranging from literal childhood punishments to symbolic restrictions that, as Defoor observes in her artist statement, have been a source of rage for many women who have found different resolutions of their difficulties in the past half century.

Defoor intends the show to begin and end in joy, cycling back to the empty dresses as symbols of hopes and expectations fulfilled in the end, but not in the way expected. She will discuss the work and its intentions in an artist’s talk on May 17; the show continues through June 7.