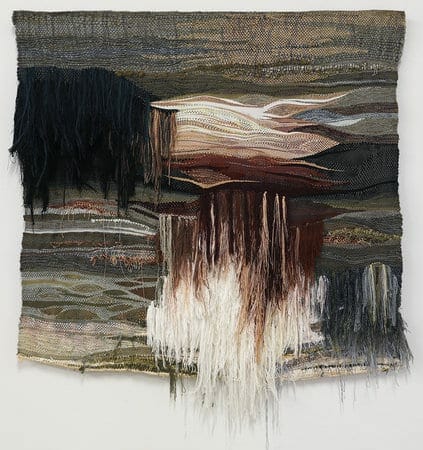 A textile hanging by Hannah Ehrlich (Courtesy of The Mast)

New galleries — commercial, nonprofit, DIY or pop-up hybrids — have been emerging regularly the past few years, but there’s been a significant upsurge lately that includes familiar names. This quick survey looks at a few diverse examples.

The Mast, which has its lease only through July 31 in a developer-initiated arts block on Mitchell Street downtown, established itself as a distinctive site with its launch show in April and a follow-up in May. Unfortunately, it wasn’t possible to post this column in time for three solo shows under the group name Material Transgressions (it closed June 2), but I still want to highlight the remarkable textile hangings of Hannah Ehrlich. She cites the landscape paintings of J.M.W. Turner as an influence and a parallel in which “nature is seen as perpetually powerful, turbulent and dangerous.” Turner (1775–1851) was an English Romantic painter, printmaker and watercolorist.

Ehrlich’s After Turner is an explicit homage, but every piece shares Turner’s capacity for creating a sense of foreboding through palette and abstract form. See more of Ehrlich’s work in the much more traditional Swan Coach House Gallery, where the Summer Swan Invitational is on view through August 8. A photograph from Alex Christopher Williams’ Black, Like Paul, at The Gallery | WISH through June 28 (Courtesy of the gallery)

The Mast’s next three solo shows — by artists Marissa Herrmann, Madison Manning and Codi Maddox under the collective rubric Slow Burner — runs June 8–29 (opening reception at 6 p.m. June 7). This will complete an extraordinary seven or eight days for cofounding Mast artist-gallerists Ellie Dent and Alex Christopher Williams. On May 31, Williams opened a solo photography show titled Black, Like Paul at The Gallery | WISH. It explores the tensions and ambiguities of his biracial identity and runs through June 28. On June 1, Dent opened her Nothing to Fear, Nothing to Doubt show at MINT, a critique of the experience of being a patient in today’s health-care industry. It runs through June 29. The duo’s energy and imagination-fueled success reflect the difficulties facing emerging artists in Atlanta, where the arts scene sometimes seems inchoate and fossilized.

Catherine Wilmer’s M.F.A. show, Coming Home, offers a different example of initiative. Its original four-week run has been extended through June 28 at SCAD’s Trois Gallery — a distinct accomplishment in a category usually defined by one-week exhibitions. Wilmer deploys uncertainties of scale in photographs detailing her childhood home and an unusual handcrafted dollhouse to make the exhibition stand out amid the vast number of similar autobiographical explorations of “home” in photography. Her aggressive pursuit of an appropriately targeted audience demonstrates one way to overcome the difficulties of making one’s presence known in a community that devotes its limited time and attention to known quantities (although Wilmer did have a photography show in 2015 at MOCA GA). Corrina Sephora’s Blood of the Earth is at Jack Sinclair Gallery in East Point’s ArtsXchange, named for the artist who established the original gallery. The new space has hosted three exhibitions since opening in January. This exhibition by the internationally known Atlanta legend is Sephora’s meditation on gun violence and how to overcome it. Her solo show, on view through July 13, is supplemented by work from guest artists Joe Bigley, Elyse Defoor, Paper Frank, Maxine Hess, Jason Scott Kofke and Joseph Peragine.

EBD4 founder and director Elyse Defoor’s Loss, Redemption, Grace, a juried group exhibition about gun violence, opens June 8, the same day as an afternoon panel discussion at Sephora’s show. The EBD4 exhibition in Chamblee includes 47 artists from 18 states, all of whom responded to the gallery’s first national call. The show is on view through July 20. Metalist Corrina Sephora’s Target 1 is part of her Blood of the Earth show at the ArtsXchange’s Sinclair Gallery through July 13. (Courtesy of the gallery)

Blood of the Earth refers to iron, the material from which guns are made but also an essential element of human blood. Sephora’s transformation of gun barrels into iron flowers has become widely celebrated. Her new work also incorporates shooting-range targets that she’s pierced with bullets from an AR-15. It succeeds in transmuting the discussion into archetypal realms that incorporate the ancient mystique of the blacksmith as an agent of transformation. The artwork by her guest artists introduces another element of depth by addressing the aesthetics of weaponry itself. Aside from their relationship with both meaningful action and meaningless violence, the pure form of a gun obeys many of the rules of proportion and angularity that govern sculpture. This is what makes their conversion from gun to flower feasible in the first place. The other option shown here, gun barrels turned into garden tools, involves an even more literal reforging. One of Atlanta artist Li Shinault’s figurative paintings. See more in Animalia (June 15–July 7) at the new 378 Gallery on Clifton Road. (Courtesy of the gallery)

Animalia (June 15–July 7), a distinctly whimsical show by another set of well-known Atlanta artists, inaugurates the new 378 Gallery. Its Clifton Road location was once the site of alternative-space galleries that exhibited the work of some of these same artists. 378 Gallery nods at history by opening with a show by surreal figure painter Li Shinault, painter Katherine Mialkowski, illustrator Denise Plauché and gallery director Tom Zarrilli, plus an opening night performance by Bill Taft’s W8ing4UFOs. (A soft launch through June 11 is a solo show of paintings by Anna Jensen with a June 8 reception, but that’s a long, complicated story.) Zarrilli has already reached out to revive the block’s alternative-space heritage with a call for artists for a juried show of found-object work titled Repurposed. Information can be found on the gallery’s Facebook page (deadline June 21).

June also features new exhibitions by Tina Dunkley, Lucinda Bunnen and Shana Robbins. Dunkley’s Sanctuary for the Internal Enemy, at Auburn Avenue Research Library, features work based on research into her slave ancestors who joined British forces in the War of 1812 (June 10–September 9, artist talk at 3 p.m. June 16). Bunnen’s A Spring Walk in My Woods, her second-ever show at Marcia Wood Gallery, runs June 13–July 20 and features photographs from almost-daily walks near her Atlanta home. Robbins’ Interspecies Lovers at Whitespace (June 21–July 27) is a topic for another Notebook.