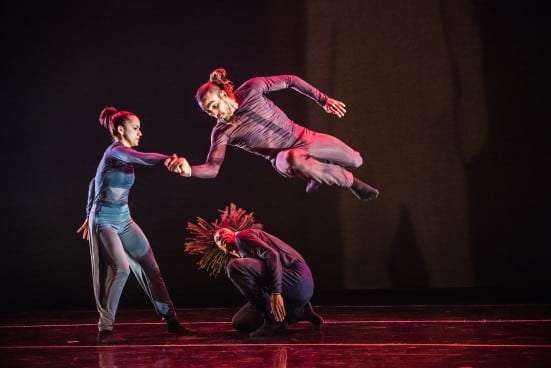 When Secretary of State John Kerry was in Cuba for the reopening of the U.S. Embassy on August 14, the Havana-based Malpaso Dance Company was in the United States, performing on Martha’s Vineyard. And when Pope Francis visits Cuba on September 19, Malpaso will be performing in Atlanta as part of the National Black Arts Festival (NBAF).

“We watch the big days from a distance,” Fernando Sáez Carvajal says with a smile. Carvajal, 50, is Malpaso’s executive director and one of its three founders. He and Osnel Delgado Wambrug, founder, dancer and resident choreographer, have just finished breakfast at Hotel Laguna in Southern California the morning after a performance at the Laguna Dance Festival. It is one of five stops in the U.S. this year, including the prestigious Jacob’s Pillow Dance Festival in June. As they talk, Carvajal is all muscular energy and intellect; Wambrug, 30, is solemn and soft-spoken.

The lifting of the U.S. embargo against Cuba has been a hot topic in American news for months. Carvajal, Wambrug and the Malpaso dancers no doubt have opinions on the subject but they have primarily kept doing what dancers do best. They take class, they rehearse, they create, they perform. And they do so with technical strength, precision and passion.

For their first visit to Atlanta, they will perform two works at the Ferst Center for the Arts: Despedida (Farewell) created by Wambrug and the dancers to music by Afro-Cuban jazz composer Arturo O’Farrill, and Under Fire by American choreographer Trey McIntyre, set to songs by Grandma Kelsey aka singer-songwriter Kelsey Swope. (Watch for the bold and passionate Dunia Acosta Arias in the “Jolene” duet with her equally dramatic partner, Joan Rodriguez Hernandez.)

The company’s 10 dancers are ballet-trained and versatile, reflecting the sophisticated dance training for which Cuba is well known. Five of them are graduates of the Cuban National Ballet School, the academy founded by famed Cuban ballerina Alicia Alonso and her husband in 1950. Combine this ballet technique with the Spanish and African dance-as-life cultures that are embedded in Cuba’s DNA, and the powerful presence of the Danza Contemporanea de Cuba and multiple other companies, and you get an idea of why dance is as important to this small island’s national identity as football is to America. Wambrug, 30, danced with Danza Contemporanea for seven years before founding Malpaso in 2012. “The company managers at Danza Contemporanea were not interested in my developing a career as a choreographer,” Wambrug says wistfully. When he left, his colleagues were convinced he was making a bad move. (Hence the company name, Malpaso, which means “bad step.”) “Every authentic adventure in life is subject to mistakes and errors,” he says. True, but he is proving the naysayers wrong. The company is much loved in Cuba and is now on its fourth acclaimed tour of the U.S.

Malpaso has a strong relationship with The Joyce Theater in New York City, which commissioned American choreographers Ronald K. Brown and McIntyre to create new works for the company. The Joyce paid the fees for the choreography, the costumes and the lighting design. This arrangement is due to the embargo, and also because the cost of commissioning new work from such reputable choreographers would likely be out of financial reach for any Cuban company. Carvajal is excited about the company’s next commission — from Canadian choreographer Aszure Barton who’s created pieces for the Alvin Ailey American Dance Theater and American Ballet Theatre.

McIntyre’s Under Fire will be on the Atlanta program. Both gritty and elegantly constructed, it showcases the dancers’ physicality and diverse personalities. By comparison, choreography by Cuban artists can look old-fashioned to American audiences. Says Carvajal: “the biggest drama in the Cuban artistic dance world is the big gap between the high standards of the Cuban dancers and the poor level of the choreography.” Why? “It’s complex. Maybe it’s connected in some way to our isolation, but also to cultural issues. It seems we are so gifted in music and dance that we think (just doing it) is enough.”

Wambrug is deeply committed to developing his choreography to meet the technical expertise of his dancers. Despedida is his latest piece. “When creating it I was going through a very difficult personal experience in my life and this got mixed with a beautiful poem (about loss) by [Argentinian writer] Jorge Luis Borges,” he explains. “Over the years we get used to saying goodbye.” That is the theme. “It is important to have something to say,” he adds. The result is a supple, meditative dance with waves of Martha Graham-inspired floor work and multiple images of the ocean.

Unlike the Cuban National Ballet and Danza Contemporanea, Malpaso is not subsidized by the state but relies on its own fundraising efforts and on collaboration, a term that Wambrug and Carvajal use frequently. It’s collaboration that allows them to rehearse at a Sephardic community center in Havana. It’s collaboration that connects them to The Joyce and brings them new works from McIntyre and Brown. Thanks to collaboration, O’Farrill has composed two original scores for them. “Collaboration is far from being a state of mind or an attitude,” says Carvajal. “In Cuba it is essential.”

Malpaso’s visits to the U.S. have to be planned as cultural exchange initiatives and are funded through grants from nonprofit U.S. foundations. This goes beyond politics and bureaucracy because it impacts the dancers directly: It is illegal for Cuban citizens to receive a fee or salary for their performances here. Instead, they receive a per diem, “which is less than any professional dance company from elsewhere in the world would get,” Carvajal explains. “By nature I am a skeptical human being, but I am very positive about changes in the future. I think this should change. It would be good and fair.”

Wambrug and the dancers are giving a master class in Atlanta on September 18. Their performance at the Ferst on the 19 will be preceded by a moderated discussion about dance in Cuba today. It promises to be a fascinating window into U.S. Cuban relations and the arts.