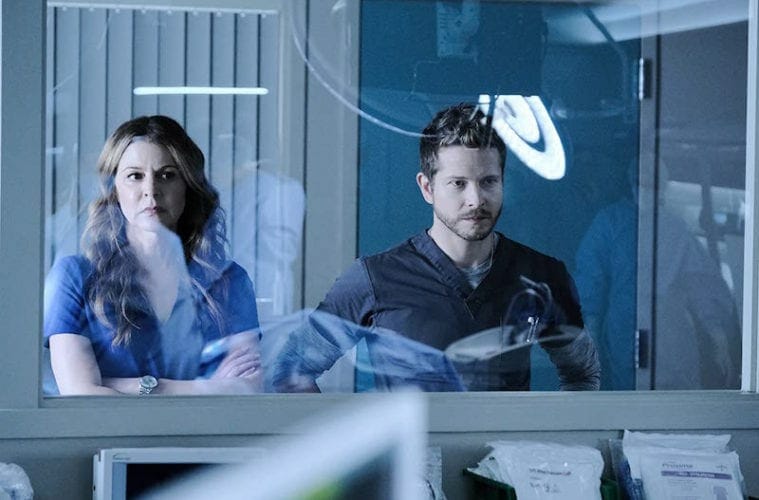 The Fox drama series "The Resident," shot around Atlanta and largely at the Woodruff Art Center, shut down production with three hourlong shows yet to film. Among the series' doctors are Jane Leeves and Matt Czuchry. (Courtesy of Fox)

Isn’t it ironic? Gov. Brian Kemp’s “heartbeat bill” — which prompted the film industry to consider boycotting Georgia — didn’t shut business down. It took the Covid-19 pandemic to do that, in what some might consider a plot turn from a Hollywood movie.

The coronavirus has stalled film production from Los Angeles to Atlanta. Lee Thomas of the Georgia Film Commission says five feature films and 29 series were in production when work was stopped. The list of Georgia-shot and now-shuttered productions includes:

Below-the-line jobs are among the most directly affected: the gaffers, grips and production assistants who make up the day-to-day operations on film shoots. For those gig workers, who must be on set to make money, the coronavirus stoppage is potentially devastating. Their struggle highlights how many Americans have no protection when a crisis occurs. Zazie Beetz (left) and Donald Glover in “Atlanta,” the Glover-penned, 30-minute dramatic comedy most recently seen on Hulu. Like countless other Georgia-filmed projects, it is dark.

“People in the film industry, we’re totally in the same boat with people in the service industry,” says Atlanta line producer Alex Orr.

Peripheral businesses that feed the industry are also suffering: prop houses, caterers, costume shops, hair and makeup artists, and actors. Even Atlanta’s 80-year-old Plaza Theatre is affected. Owner Chris Escobar, also executive director of the Atlanta Film Festival, recently told Vice Magazine that he wonders how his business will survive a two-month hiatus. (The film festival has already been pushed back from late April and early May to September 17–27.)

“Creative people tend to gravitate to other creative people,” says Atlanta film producer Linda Burns. “Social distancing is very hard for many, especially those living alone or in small apartments. We’re just not built for it. It’s the sense of purpose and the ability to create that has been taken away. We work 12–18 hours a day really hard, and suddenly not doing that anymore is a challenge.” “We’re totally in the same boat with people in the service industry,” says Atlanta line producer Alex Orr, with wife Katie, a director.

Georgia film production has been strong for years, with local talent jumping from production to production almost without a break, Burns and Orr say. The industry spent almost $3 billion on Georgia film/TV production in 2019 alone. Georgia has 92,100 film and TV industry jobs, according to the Motion Picture Association of America.

“The other thing to consider,” says Burns, “is that things have been so good here the last five–six years that people have forgotten about the lean times. They bought houses, new cars and trucks, expensive gear to rent to productions, and those are loans with monthly payments.”

Orr, who’s married to film director Katie Orr and has two young children, has savings and says he’s been adjusting his spending habits to weather a few months of unemployment.

He also has health insurance through the Directors Guild of America. Unlike Orr, most gig workers are unsalaried and work as contractors. Many live paycheck-to-paycheck and often don’t have medical coverage.

“I BELIEVE A FEW COMPANIES MAY GO UNDER”

Nikki Giovacchini, 52, who’s managed several Atlanta prop houses during his film career, is among those dealing with a lack of work. He has big medical bills from heart surgery in October and a 2-year-old and 6-year-old to support. With no weekly income, he says he can’t afford to keep health insurance for himself or his children. He’s seen work stoppages due to strikes and union agreements, he says, but nothing like this.

“If you’re working at a prop house or other rental facility and production stops like it did, there is nothing set in place,” he says. “I believe a few companies may go under if the ban on work goes on for too long.”

Giovacchini has been applying for other jobs but at his age and with more than 30 years in film and television, he says he lacks the skill set for other careers.

Orr worries about the long-term impact on Georgia’s film industry.

“I hope whatever economic fallout [there is] isn’t so heavy that it puts in question any sort of tax incentive,” he says, referring to the 20 percent credits that have lured countless Hollywood productions to Georgia. “The film tax credit hasn’t weathered any economic downturn ever.“

There’s been speculation, too, on what the long-term consequences of coronavirus-related movie-theater closures will have and how that, combined with the increasing popularity of streaming platforms, might affect the business in the next few years.

“THERE WILL CERTAINLY BE A SHAKEOUT”

Businesses like Atlanta’s PC&E (Production Consultants and Equipment), which provides cameras and other equipment for such projects as Stranger Things, The Walking Dead, the feature Logan Lucky and the Avengers movies, has had to get creative.

For now, says general manager Mark Wofford, PC&E’s 30 employees are getting their regular salaries or hourly wages. “We are working on options to keep our team working — or at least active — during this pause,” he says. “We’ve been discussing the possibility of offering a series of video podcasts focused on issues of interest to our clients. Each would be hosted by a PC&E staffer and would be streamed for free through Facebook and other social media.” “For many of our newer and younger technicians, this will be the longest time without work since they became part of the film industry,” says key grip Eddie Evans (center), on the set of the 2017 film “Fist Fight” (with Ice Cube and Tracy Morgan).

For longtime key grip Eddie Evans, who has more than 100 Georgia productions to his credit, riding out time without work isn’t new. His union has given Georgia film crews information on filing for unemployment and other financial options, but he says it’s different for less-experienced crew members. “For many of our newer and younger technicians, this will be the longest time without work since they became part of the film industry,” he says. “There will certainly be a shakeout.”

The International Alliance of Theatrical Stage Employees (IATSE), the union representing crew workers worldwide, estimates that 80 percent of its members have lost jobs. In Georgia, that means 5,000 people.

On March 14, Congress passed the Families First Coronavirus Response Act. President Trump signed it into law four days later. During congressional negotiations, 38 House members sent Speaker Nancy Pelosi a letter appealing for specific protections for entertainment workers. The law, however, does not include such protections.

“The unique freelance nature of work in film, television, theater and live music means that a large number of the professionals who make these productions possible work only sporadically — often with extended periods between paying jobs — and count on income from each project to make ends meet,” the letter read in part. “Many of them can’t qualify for traditional unemployment benefits or paid emergency leave, yet will now be unable to cover their basic expenses due to lost work.”

There have been some efforts within the industry to address the precarious nature of film and TV industry employees. WarnerMedia, which comprises Turner, Warner Bros. Pictures, Warner Bros. Television and HBO, plans to offer a $100 million relief package.

Netflix previously established its own $100 million fund “to help with hardship in the creative community.” In a widely shared memo from Ted Sarandos, Netflix’s chief content officer, the platform promised that most of the money would provide “support for the hardest-hit workers on our own productions around the world.” It’s now trying to determine how that will work, production to production. Netflix already committed to two weeks’ pay for the casts and crews of shuttered productions.

What does this mean to those of us who see movies and watch television? No one is certain.

The producer Burns thinks the summer TV season will be fine because most of those shows are likely in post-production. She sees the fall season as more problematic and worries about an onslaught of reality shows.

“Right now,” she says, “I think there is a lot of spaghetti being thrown at the wall, and someone is going to come up with something really unique and clever to this time, find a way to shoot it and broadcast it. We’re seeing it all over social media, so someone will come up with something that we can all relate to, that hopefully brings out the good in people.” Atlanta-based producer Linda Burns worries that summer will bring a rash of reality shows to television, and says, “I think there is a lot of spaghetti being thrown at the wall.”

Summer movie blockbusters are another story, Burns says, with billions and billions of dollars on the line and the potential to make or break the Big Six studios — Warner Bros. Pictures, Paramount Pictures, Walt Disney, Columbia Pictures, Universal Studios and 20th Century Studios. They account for 90 percent of box-office revenue in the United States and Canada.

“They could stream everything,” Burns says, “but who wants to pay $15 or more for a movie when they are unemployed? That adds up fast when you’re sheltering for a few months. I would imagine they are going to dump a lot of content they already have into cheaper streaming options and hold off on the summer blockbusters until theaters open, but if streaming for top dollar starts to trend, maybe we watch summer blockbusters at home. Either way, this is the big financial issue.”

This will all end at some point, surely. But the toll that Covid-19 will have taken by then will likely change Georgia’s film landscape.