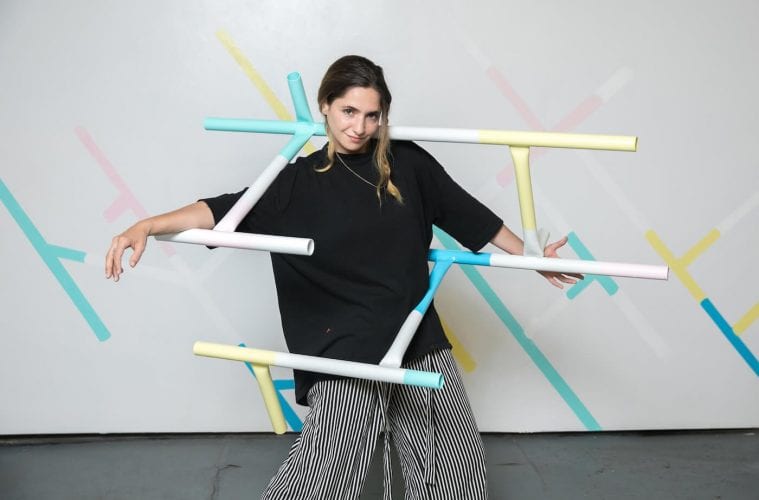 A conversation with Sara Santamaria: immigration, broken memories and what it means to be a stranger

Art is often a way for creatives to process difficult or complicated emotions. Such is the case for Sara Santamaria, whose first solo exhibition, Who comes today and stays tomorrow, is on display now through July 1 at Eyedrum.

The sculptural installation includes suitcases covered in what appears to be thick white paint that look as though they’re melting into the floor, and precariously balanced structures painted in pastel colors meant to resemble playground equipment from the 1980s. According to Santamaria, the work is meant to reflect her feelings surrounding the immigration process — the experience of family members as well as herself (she immigrated from Spain to Atlanta in 2014). Those feelings include anonymity, uncertainty and toggling in between two worlds.

ArtsATL chatted with Santamaria about what inspired the pieces, the conversations she hopes to spark and what it means to be a stranger. ArtsATL: You came to Atlanta in 2014 — what brought you here?

Sara Santamaria: I wanted to escape the political and economical situation in Spain. My boyfriend at the time [now husband] ended up getting a job here — he immigrated here like eight years ago. He found a job here, so he moved first and then I went through all the applications for immigration and arrived two years later.

ArtsATL: How did you begin to immerse yourself in the arts scene here?

Santamaria: I think it was the relocation itself that pushed me forward and made me decide I wanted to have my own [art] practice. Before then, I was creating work but it was mostly for other artists, so when I came to Atlanta I felt like it could be a good starting point to develop my own work. I decided to just start small, and I committed myself to find a place where I could create. I found the ceramics space at WonderRoot — it was affordable and in walking distance. It opened other opportunities for me. I participated in their other programs like the CSA, WonderFarm and the Walthall [Artist] Fellowship, and that led to creating [Brutal Studio] with Allie Bashuk and Danielle Brutto, who I met at WonderFarm.

ArtsATL: What inspired you to create this show?

Santamaria: I think I had to digest my whole process of immigrating to the States, which was very enduring to me. I had to be separated from my husband for two years. I was ready to move to the States, but they denied my visa, so I had to relocate and live on standby for two years until my paperwork was done. Once I got here, what I wanted to do in my work was to digest all that information.

In a way, this body of work has made my own experience immigrating to the States more tangible. I have my own experience as an immigrant, but I also have members of my extended family who immigrated — my uncle is from Syria, and he immigrated from Spain three years ago. His family was still in Syria when the war started, and they have been forced to find refuge in neighboring countries. So it’s been a method of healing to me. But also it makes me feel very disturbed, all the news about immigrants in Europe and the volume of debate about immigration, because I grew up in the complexity of the situation, and I know the personal stories that get lost. I also wanted to create work that somehow raises awareness and stimulates conversation between people. ArtsATL: You’ve said the main question you asked yourself while developing this work was, “What does it take to become a stranger?” Tell me about that.

Santamaria: I think that you can become a stranger by establishing growth. Becoming a stranger can be positive — it can be a crucial, liberating step in self-discovery. It can be a barrier, but also a catalyst for change, personal development and other forms of creativity. I think becoming a stranger means you relocate somewhere and you have to renegotiate with yourself who you are. You have to be able to be so many different things because people won’t know you because you don’t belong to that place. You are a stranger. It also comes from a place of belonging to two different places that never really blend in a hybrid. You have your identity of origin and your identity at a destination point. The stranger exists in that in-between.

ArtsATL: How does this show tap into themes of memoir, displacement and identity?

Santamaria: I see it as a linear story: You immigrate, that’s the first part, people relocating from a specific country. Then that implies a newer definition of your identity — your identity has to change somehow when you relocate because you have to accommodate new social customs, new language. You have to recalibrate yourself and your identity. That change that’s facilitated by something new, in my experience and also the research I’ve done on the subject, is the way you redefine that identity. You do it by questioning, “Who are you?” That’s probably something you’ve never really asked yourself because you didn’t have that relocation issue that forces you to ask. It made me go back in my memory to where my identity started. In my work and in my experience, when I have to redefine my identity in a new culture, I look back at who I was when I was a child. How I was raised, what were my first memories of childhood, and how do these broken fragments of memory help define who I said I was in the past and who can I be now?

ArtsATL: How do you want people to feel coming away from your show?

Santamaria: The way the work is laid out is very open. I wasn’t specifically interested in laying out a narrative, but I also think the work is very easy to read. I hope people can go in with their own experiences and ideas and thoughts and just reflect on the subjects.

ArtsATL: How has it felt revisiting childhood memories from a position of displacement through this work? Santamaria: Nostalgic, overall. It’s very inviting to recall those moments of the innocence of your childhood. The general sensation that I had was that it’s been very hard for me to blend. What I remember from the past remains in the past, but what’s happening now is constructed on a very separate side. It doesn’t seem like I’m able to blend those identities. It’s like I’m coexisting in between two worlds. The way I make the work and the way the work is aesthetically presented is very straight up. The first part of the installation has a very specific aesthetic — it’s about the individual stages of immigration, the time that has passed in that process when your life is put on hold. It’s like you’re anonymous. And then you cross a barrier that’s divided into memories and childhood broken fragments of memory. The work itself is divided into chapters. It’s like this sense of in-betweenness that makes you feel so strange.

ArtsATL: How can art be its own form of resistance?

Santamaria: Simply bringing this work up into a conversation [about immigration] in Atlanta can generate some empathy and awareness. It’s just a subject that’s not very interesting to some. This work is a way for me to heal my own experience and make it more tangible, but also to bring awareness and generate some empathy in people. June 20 is World Refugee Day, and there’s nothing going on in Atlanta related to that day. I went to the consulate and had a conversation with them about collaborating on doing something. I wanted to propose a screening of short documentaries where a refugee plays a big role, to help bring this conversation up and to show images of real situations people are facing. The screenings will take place at the closing, on July 1st. My intention with this is to make it more of a personal approach — to approach people with the real issues immigrants and refugees face with the process of relocation. Most live very far away from that reality.

Sara Santamaria’s Who comes today and stays tomorrow will have a closing reception on July 1, 2017, from 7 to 10 p.m., with an artist talk at 8 p.m. The artist talk will be followed by a series of short films on the war in Syria and the ongoing global refugee crisis, copresented with Welcoming Atlanta in honor of World Refugee Day. Screenings will begin at 9 p.m.