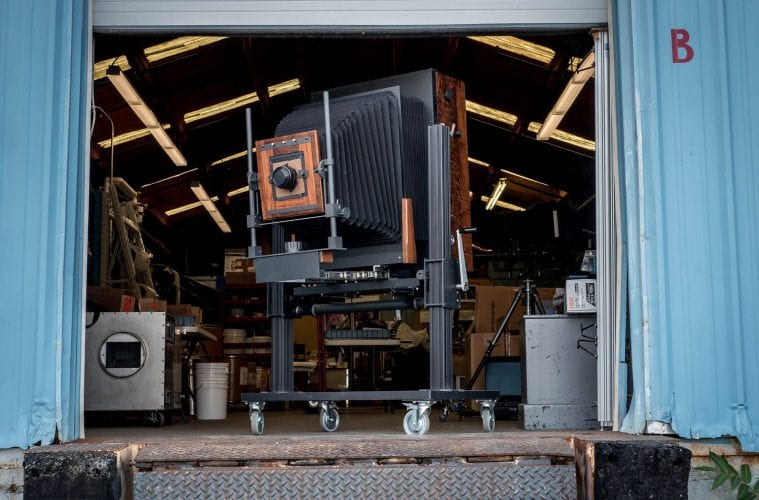 A conversation with photographer John Reuter of 20×24 Studio

Anna Nelson-DanielOctober 25, 2016
Art+DesignPreviews
If you enjoy this story, or the other stories you read on ArtsATL, we encourage you to donate to our annual fund. By investing in ArtsATL, you are investing in the arts in Atlanta.

Later this week, artist John Reuter and his large format Polaroid camera will be sojourning to Hathaway Contemporary as part of the 18th annual Atlanta Celebrates Photography festival. It’s projected by 20×24 Studio that production for the film format will end by the close of 2017. With this in mind, Hathaway Contemporary is hosting Reuter with an unprecedented opportunity to access the large format 20×24 Polaroid camera in Atlanta before it becomes part of photography’s history. To participate, the public will have the opportunity to purchase 30-minute photo sessions with Reuter or Atlanta-based artist Sheila Pree Bright online, the result of which will include two 20×24 Polaroid portrait photographs. Independent artists also have the option of purchasing two-hour sessions to photograph with the studio equipment.

Reuter, who has over 30 years of experience working with Polaroid, will introduce the camera in an artist talk this Thursday, October 27, at 6 p.m. In advance of his talk, we spoke with Reuter about his career, portraiture and the extinction of film formats in this digital age. ArtsATL: You have a long-standing career working with Polaroid, how did you initially become involved?

John Reuter: I came to visit Polaroid in the summer of 1977 and showed my work to the marketing director. He bought some [prints] on the spot and continued to supply me with film for the duration of my graduate career [at the University of Iowa]. When I got out of school, in 1978, I wanted to be a university professor, though these jobs were few and far between. I heard through the grapevine that Polaroid was offering jobs. I worked in this studio for a year and a half in a research position, later working with 20×24 in 1980.

ArtsATL: Photographing with the Polaroid 20×24 camera is unique in the way people interact with the physical object. Can you talk about this collaborative creative process?

Reuter: The legacy, of course, is that it’s primarily an artistic tool for people to create their own imagery. Working with the 20×24 camera is different from working with a 4×5 camera. The 20×24 camera is a huge object at 5 feet tall, weighing 250 pounds. Looking through the back you are sort of divorced from your subject so you have to walk around it to see your subject.

We establish what people like for lighting using seven broncolor packs that, together, emit close to 20,000 watt seconds of light power. Most people aren’t used to working with so much light power, so part of the job is to translate what that means. The actual creative process is self-revelatory so we don’t have to do a lot there.

ArtsATL: At that point, the clients are exercising their creative freedom. What is unique about having the Polaroid print at the time of the shooting?

Reuter: When the print comes out, that certainly cuts through a lot of conversation. There is no creative process I’ve ever been around that parallels the large format instant image in terms of understanding what you’re getting and where to go next. The relationship between the subject and the photographer is unmatched. It’s not like you show it on the back of a monitor of a DSLR or a monitor in a studio. It is way different to have a real print that you can pin up on the wall that everyone gets to look at and examine closely. It establishes a trust between the subject and the photographer like no other process I’ve ever seen. It allows you to move through things a lot quicker and more intensely. There is always a high level of engagement with the image that you don’t really see in a lot of other formats. ArtsATL: How has artistic expression taken place in your portraiture work?

Reuter: A lot of the artistic works could be considered still life, assemblage or installation. We’ve done work where people have very detailed sets, backgrounds and objects. You may have a person inside that set as well. These elements can bridge still life and portraiture, described as environmental portraiture perhaps. We’ve had a lot of great success when people brought in fairly elaborate props, make themselves up in a certain way or wear costumes. It extends the notion of just getting in front of the camera. It allows for variety and experimentation. [Photography] has always been a medium that has other avenues that you can go into. We have some clients digitize their analogue master to take it in different directions almost like a printmaking experiment.

ArtsATL: The end of 20×24 large format Polaroid photography coincides with an increasing engagement with digital technology. Widespread adoption of the internet continues to influence notions of contemporary aesthetic, culture and society. What do you see for the future of an artistic photographic practice? Do you envision a digital platform that would give life to the 20×24 Polaroid after the film expires?

Reuter: Interesting question. I have certainly embraced digital production and could not make the documentary film I’m currently working on without it. I have always been an advocate that my art is not just an image, it’s an object, an artifact. The real thing is still primary. It’s not just an ethereal collection of data. When the image is transmitted through the internet or social media you don’t know the scale necessarily or what it was like to stand in front of it. Focusing on this historically, contemporaneously and thinking of it going into the future, I don’t know that there will be a replacement for the 20×24 camera.

One of the things I have observed is a reaction against the absolute resolution of digital technology. When all of the images are technically perfect how does the voice emerge?

ArtsATL: Developing as an artist at that point places less emphasis on the technical aptitude; the role becomes more centered around the ability to establish a voice within a larger cultural framework. What is your perception of Atlanta as a city for artists?

Reuter: Artists tend to be artists no matter where they are. Atlanta has become a center for filmmaking and photographers. It’s a big center now in the country in terms of creativity. I’m looking forward to seeing what comes up from that.