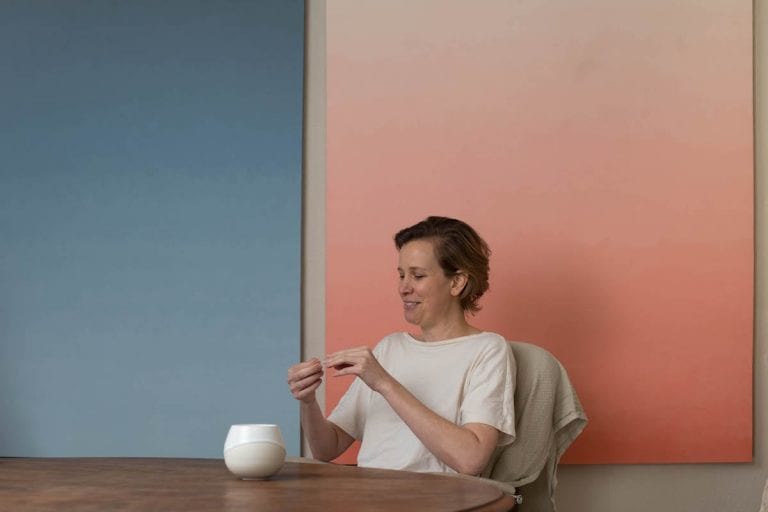 Mitchell sits in front of Untitled (The Boat Project) in her Home Studio, February 2017.

A conversation with Kirstin Mitchell, the artist formerly known as Kiki Blood

Kirstin Mitchell places two handmade ceramic cups beside a bottle of water on the table. She is excited in preparation for her upcoming exhibition at The Finishing School in Athens, Georgia. Sunlight pours into two front rooms of her spacious Grant Park Home Studio. We sit around the table in the first room to begin our conversation. She lists creative minds who serve as inspiration, from Carol Burnett for her captivating humor to Robert Rauschenberg for manifesting art as a playground. Discussing her conceptual framework struck me as reminiscent of Rauschenberg’s collaborator John Cage.

Mitchell’s practice experiments with varied media synthesized by an emotional process. Known for over five years performing as alter ego Kiki Blood, she builds on this foundation in her more recent exploration of objecthood. She is the recipient of the 2016 Eyedrum Studio Fellowship and the 2015 AIR Serenbe Project Residency with Dashboard Co-Op.

ArtsATL: With over five years performing as alter ego Kiki Blood, how has this practice shaped your, now, more object-focused artwork? What sparked the transition?

Kirstin Mitchell: Kiki Blood allowed for room to test boundaries, to heal, to confront, to humiliate herself. I would set her up as a form or object and inhabit her shape, exploring my truths within it. She let me objectify her to explore my identities.

I was able to shed environmental values and understand myself more clearly both in body and mind. The name was given to me by others: Aunt Kiki was given to me by my sister when she had children, and Blood was added by a French saxophone player who saw me perform in Vienna (after being inspired by a Viennese Actionist Retrospective). I had used a mix of jelly and ketchup to make a somewhat realistic blood color, pouring it on myself between sets of a King Khan show, backed by their horn section with wild sensual drones. He added “Blood” to my name in a Dracula voice, mocking the smell of sweet tangy gore. The depth and comedy solicited more exploration, and this was the inlet.

In using my own story line and inner-making as an expandable, mutating form I have become even more fascinated with that very construct projected outside of my body. I have been thinking of ways to leave my performative practice suspended in a space without my body. In creating atmospheres for Kiki Blood to invade, I began understanding the variety of mediums that paralleled a particular part of me. The gradient paintings, for example, represent this atmospheric expansion, a place to dissolve or hold a large amount of space. The sculptures begin to play on disruption or holding of space. I have often [explored] a great deal of visual language by working in dichotomy.

ArtsATL: Color is an increasingly integral component of your gradient pieces. What most influences your considered palette?

Mitchell: Moving into another phase of palettes as I backed off the vibrant reds, I began muting my colors. I was always in love with the pastels of the 80s as a teen. I loved the pastel oxfords from Ralph Lauren and the playful Colours of Benetton. Fashion has been a great source for my spectrum, as a way to test drive them energetically.

I have gathered colors along the way. Particular loves, ones that match my skin, some that soothe, others that ignite. Some are tricky like green and red. I am very specific about including these.

I like my greens to smell alive like grass or moss and bring something grounding into the palette. I distinctly invited what I call Italian pink into the mix as a diffuser of the “Blood” era. Now I’d say it’s a coral, a touch on paradise that arose during Tropic of Gemini, especially when paired with an oceanic turquoise. Colors can directly affect the mind, and I am inclined to use them to enlighten the emotional body.

ArtsATL: Your two-dimensional works are often displayed in multiples. What is the significance there?

Mitchell: I have always enjoyed a choose-your-own-adventure. Once the work is materialized, it is mutable in its arrangement. The gradients can fulfill this by subtly energizing an environment or even being paired in a way to disrupt it. If there are several together, the viewer can move across them noting a connection to a given color, being drawn to one based on a temporary mood. I like this possibility. The sculptures are similar in that depending on the character of the installation, a specific assemblage would be transformative. The use of rubber has been a particularly playful way for me to insert my body process into my work. They have an aliveness to them. I can make cascading shiny swags or break a plane with a dusty sheet of skin. I am enjoying the mutability in this practice.

ArtsATL: You were the first resident artist in the pilot Eyedrum Studio Fellowship allowing for creative experimentation over a two-month period. Culminating this program, you hosted a reception where the community could engage in your practice on-site in the studio. Did you create your latest body of work with this audience in mind?

Mitchell: It was actually an open studio for the duration [of the residency]. I invited folks for one-on-one dialogues, which was such an important part of my process. I have found that by sharing language in the studio I begin to uncover so much more.

Notably, Jerry Cullum and Victoria Camblin have been quite helpful with language to describe and contextualize my work. Other artists as well dropped in and gave me great perspective and support, including Scott Ingram, Craig Drennen and Jody Fausett, among others. And Michael Rooks asked some very useful questions. My audience has been so diverse over the years. At Eyedrum, some visitors loved the most subtle pieces, children loved the humorous ones.

ArtsATL: How has living in Atlanta informed your work?

Mitchell: I have tried to run away many times but always come back. It is home for me, and I have responded to its limitations and freedoms through the years. I like Atlanta. I like the momentum that’s happening here creatively.

ArtsATL: Throughout March you will have work up in the exhibition Parallel Play, with artists Kojo Griffin and Andrew Boatright at the Finishing School project space in Athens, Georgia. What can you tell us about this show ahead of the reception Saturday, March 4?

Mitchell: I am excited to work with curators Candice Greathouse and Curtis Ames for this exhibition. They are a part of the expansion in Atlanta. The curation of the three of us [Kojo Griffin and Andrew Boatright] for the show is pretty great. I fall between the two in age and am enjoying observing the ways we connect and differ in our process.

The space is 20 x 25 feet and is being constructed by Mike Calway-Fagen [Sculpture Head at UGA] as an experimental sculpture venue. It is exciting to be a part of the launch of this gallery and expand these object dialogues a little further.

Parallel Play will be on view March 1–31 in the Finishing School at the Thomas Street Complex on the University of Georgia campus (215 S. Thomas Street, Athens, GA 30601). Mitchell will also perform in a September exhibition at Veno Gard Kunst located in Selje, Norway.