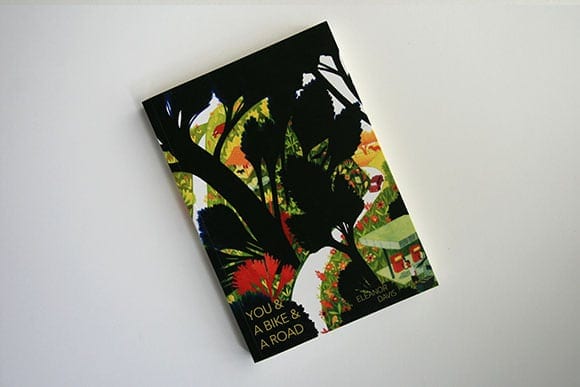 A conversation with cartoonist and author Eleanor Davis 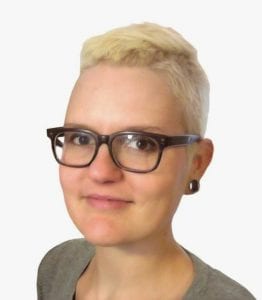 Eleanor Davis is an award-winning cartoonist who lives in Athens, Georgia. Her fourth book is You & a Bike & a Road (Koyoma Press, 172 pp), a journal of her recent attempt to bicycle across most of the South, from Arizona back to her home. ArtsATL talked to Davis about lessons of the trip, how they’re conveyed through ink drawings and what to read while traveling across the country.

ArtsATL: You express several motivations for taking this bike tour. Was the trip as medicinal as you’d hoped? Are the effects of it lasting enough? In short, how’re you doing?

Eleanor Davis: Yes, I got home from the trip and felt very good. I probably felt good for about three months before I started feeling bad again. Then my husband and I had a big family emergency and the election happened and there hasn’t been time for feeling bad anymore.

ArtsATL: On day 39 of the trip, you reflect on how the automobile infiltrates our culture. “‘Without me you’re so weak.’ This is what cars tell us, like some dumb cartoon villain.” Is this why you initially became interested in bicycling, or is it the resultant lesson?

Davis: The two things go hand-in-hand. My parents have always loved bicycling, and tour themselves. I was taught to ride early. I could see from when I was very young the way cars ate up the beautiful place I grew up in, tearing apart and heating up the desert, separating people from one another, and making themselves indispensable. Then, when I was 16, I went to Japan as an exchange student and biked every day. In the small, old town where I lived, the cars had to navigate around the people, not the other way around. There was no sprawl. Everyone walked and biked and used public transportation. The land wasn’t so burdened by freeways and traffic, and people who couldn’t drive — kids, the elderly, differently abled folks — weren’t stuck at home and isolated the way they can be in cities built around cars. I could tell it was a better way to build a community, and I took that understanding home with me. 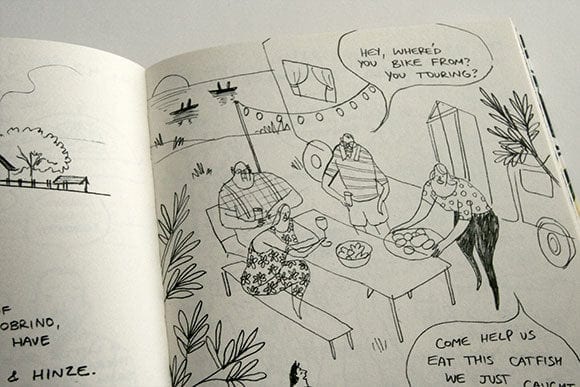 A page from Davis’ You & a Bike & a Road. (Images courtesy Koyama Press.)

ArtsATL: On day 27, you wrote, “Meet some strangers. Get to know them and they get to know you. Now they are your people.” You were forced to socialize, but in total, were those human connections a big part of what sustained you for the trip?

Davis: In my everyday life I often feel stressed from social situations, but I tend to think people are interesting and mean well. And while I was bicycling I was lonely — lonely isn’t the right word, even — I was alone, and I wanted to be around other people the way you want to eat food when you’re hungry or drink when you’re thirsty. So I found myself talking to people much more than I normally do. That felt strange but good.

ArtsATL: One particular person that haunts you is a possibly undocumented immigrant who is hunted down by police. You traverse several Southern states and have repeated encounters with border patrol. At the end of the comic, there are resources for immigrant rights advocacy. Was this a cause you were interested in before the trip, and how does it continue to concern you now?

Davis: I have been aware of issues surrounding immigration for a long time. When I was a teenager in Tucson we would hear about people dying of thirst as they tried to cross the desert between the US and Mexico. My best friend is married to a man who was undocumented for decades, and I have followed their struggles with navigating the broken immigration system and the various fears and challenges they’ve faced. Athens has a large immigrant community, and I have friends here who are undocumented, and I am involved with the Athens Immigrant Rights Coalition here in town.

After the election of Donald Trump, the rhetoric against Latinx people in general and undocumented workers, in particular, has reached a fever pitch, despite the number of immigrants in the US having been steadily dropping now for many years, and numerous studies showing that immigrant labor does not hurt the US economy or US workers. Deportations, which were already unacceptably high under Obama, have increased. Mothers and fathers are getting deported and separated from their children for absurdly small nonviolent crimes like using fake social security numbers. People are afraid to leave their homes, to report crimes or abuse to local law enforcement, or to get vital medical help.

This is while they are paying taxes, and paying into social security without any hope of that money getting paid out to them again. Meanwhile, they are growing and harvesting the food we eat, building our houses and roads, cleaning our homes and caring for our children. While undocumented workers are forced to live in fear, American companies hire them without fear of substantial punishment. The Georgia legislature tried to pass a law forcing immigrants to have “non-citizen” printed on their driver’s license, and they did pass HB 452, to publish a public list of immigrants who have committed crimes — something federal law prevents being done to American citizens.

The othering and scapegoating of immigrants in America today is causing real and lasting harm to families, friends and neighbors, and we have seen throughout history what happens when one group of people turns against another like is happening today. It goes against all the things that Americans can be most proud of. I encourage everyone to speak out against this heartbreaking rhetoric and speak out for Latinx, undocumented and immigrants everywhere.

ArtsATL: Seems like you picked up on the major lessons of this trip very early on. On day 12, you wrote, “I want to bike fast and draw beautifully. But if I can’t, what am I gonna do? Stop? Just keep doing the thing.” Well, on this trip, you were drawing beautifully about biking fast. Can you discuss why a comic feels like the right medium for journaling about your trip?

Davis: I had read Anna Karenina around 2008 and it just took over a month of my life. I loved it so much that I wanted to start reading War and Peace right away, but I couldn’t afford to get that involved with a book again. So it had been on my bucket list for a long time. I also wanted something very long. For the record, Anna Karenina is much, much better — it’s a perfect book — but War and Peace is terrific as well, of course.

ArtsATL: You find a kitten at the end. Great souvenir. How’s the kitten doing?

Davis: She is a fat, healthy, loving, energetic blessing. I am a little sad not to have finished that trip, but every day I’m glad for that cat. Her name is QT, after the truck stop where we found her.