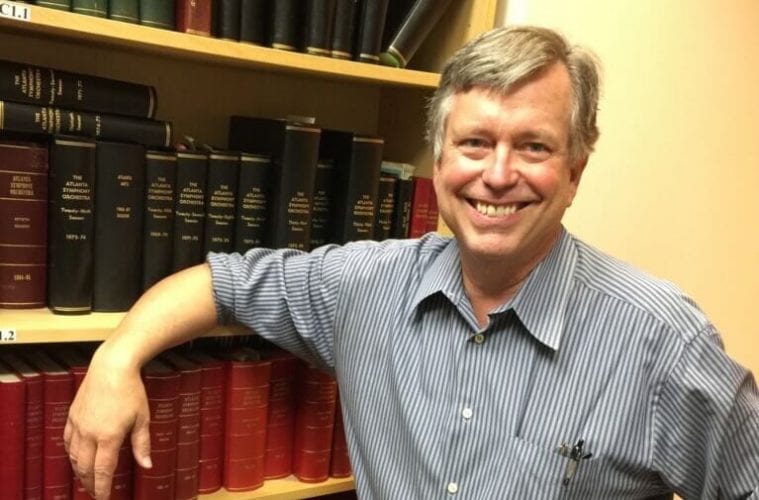 A conversation with Bob Scarr, the Atlanta Symphony Orchestra’s archivist

That was Bob Scarr’s first thought when Paul Hogle, then-development director at the Atlanta Symphony Orchestra, cold-called him in January of 2010 and asked, “Bob, would you like to come down here and do a fellowship?”

Scarr’s response to the offer was odd for a variety of reasons. For one thing, there was no job description. The position was unpaid. And Scarr, a classically trained musician, was already employed full-time as a flight supervisor at Delta Airlines, where he’s worked since 1978.

Still, he remembers having a premonition that his life was about to change.

“As Paul introduced me to my new colleagues [at the ASO] that first day, telling them I’d be here for six months, all I could think was ‘No . . . ,’” says Scarr. “‘I’m going to keep my mouth shut, absorb everything, do whatever is asked of me, figure out a way to make myself useful without being a pest and [hopefully, be invited to] stay.’”

Seven and a half years later, Scarr is not only on the staff, he is indispensable.

His role as manager of the Atlanta Symphony Orchestra Archives was formalized by the ASO’s Board of Directors in May of 2013 after Scarr volunteered to catalog and preserve the contents of one of three storage units in Brookhaven. The unit held 270 boxes of printed programs, scrapbooks and press clippings that dated back to the ASO’s founding in 1945. Photographs, administrative files and audio recordings chronicled the Symphony’s evolution under the musical direction of Henry Sopkin (1945–66), Robert Shaw (1967–88), Yoel Levi (1988–2000) and Robert Spano (2000-present).

“I started moving boxes out of that dark, dingy, non-air conditioned room in my blue 2009 Honda Civic,” says Scarr. “Every time I ascended the elevator at Woodruff with that precious cargo, I’d think to myself, ‘I found what I needed to do.’”

In the process, he unearthed 1,100 reel-to-reel concert recordings and audio files that would have been lost had they not been restored and digitized. Thanks to the patronage of Ann Marie and John B. White, Jr., and a matching contribution from Coca-Cola, the four-year project was recently completed.

“Bob has come across some real gems including the live single concert recording of Beethoven’s 9th Symphony, with Mr. Shaw and the ASO and Chorus just prior to their triumphant 1988 tour to Europe,” says Jennifer Barlament, the ASO’s executive director. The concert, which marked Mr. Shaw’s final appearance in Atlanta as music director of the orchestra, was recently released on the ASO Media recording label.

Barlament credits Scarr with helping to create a new partnership with the Georgia State University Library Special Collections and Archives, which recently acquired the ASO’s entire cache dating back to 1945. She says that without his meticulous record-keeping, the late Jane Little, a bassist, might not have achieved her Guinness World Record for the longest professional tenure with a single orchestra. And Barlament is only half-joking when she adds, “One of the collateral benefits of working with Bob is having access to his colleagues at Delta,” whose sophisticated weather-tracking systems have helped the ASO plan outdoor concerts in Piedmont Park.

“Without Bob, there is no archive,” says Hogle, who is currently president of the Cleveland Institute of Music. “He was the guy who saw a pathway to help the ASO put those pieces of the puzzle together. I think it’s so appropriate, given his background at Delta of creating flight plans, solving problems, and getting people to and fro safely and on-schedule in spite of all those moving parts.”

If you’ve ever experienced the exhilaration of hearing a symphony perform live, you’ll have a pretty good idea of what it’s like to be an audience of one as Scarr talks about his evolution from intern to steward of the ASO’s archives. His storytelling is as visceral as the most compelling composition. His tempo will swing from allegro to andante and back again over the course of two hours. And his mood shifts range from melancholy to joy, tentative to full-gallop.

He discovered classical music when a high school teacher took him to hear Leopold Stokowski conduct Beethoven’s 5th Symphony and Alan Hovhaness’ Mysterious Mountain at the ASO. From then on, there was no turning back for the teenager, who could not name a single popular tune of his generation but owned a complete set of the Mahler Symphony as recorded by Leonard Bernstein.

An accomplished musician, Scarr was a member of the Georgia All-State Band, played 2nd trombone with the Chattanooga Symphony & Orchestra and served on the boards of the Cobb Symphony Orchestra and Jazz Orchestra of Atlanta. He is the kind of devoted fan who won’t think twice about using his Delta flight privileges to visit Vienna or Grand Rapids to attend a philharmonic concert. He is not shy about reaching out to total strangers (on his own time and dime) — including musicians, conductors, administrators and support staff at concert halls worldwide — to cultivate connections with the ASO and enhance his understanding of best practices in marketing, fundraising, talent development and writing grant proposals.

Scarr is also a consummate student.

He joined the Society of American Archivists and Performing Arts Roundtable to keep abreast of how other performance arts groups preserve their records. He benefits from the ongoing mentorships of giants in the field like Frank Villella, director at the Rosenthal Archives of the Chicago Symphony Orchestra, and Richard Pearce-Moses, founding director of the Master of Archival Studies program at Clayton State University in Morrow, and principal author of “A Glossary of Archival and Records Terminology.”

When Scarr was admitted to an intensive two-week orchestra management seminar titled “Essentials of Orchestra Management,” sponsored by the League of American Orchestras, the then-55-year-old was an outlier among 28 classmates who were in their 20s and 30s. As well, he was the sole representative of corporate America among emerging professionals representing the Metropolitan Opera House, Los Angeles Philharmonic and Phoenix Symphony. Unbeknownst to Scarr, his enthusiasm and solid work ethic made him such a standout, that one of his instructors was inspired to reach out to Hogle and suggest that the ASO find a way to harness Scarr’s unbridled passion and commitment to the art form.

Arguably, the only thing that rivals Scarr’s devotion to the preservation of orchestral music is his flat out glee as a fan.

He admits to geeking out when meeting luminaries like Deborah Rutter, then-president of the Chicago Symphony Orchestra — who led his “Essentials of Orchestra Management” group though a group exercise. Likening the experience to a Major League Baseball fan going to SunTrust Park and sitting in the Braves dugout next to a star player, Scarr says, “There I was, sitting next to Deborah Rutter!” He draws out the last four syllables and lets Rutter’s name hang in the air for maximum impact. By now, his eyes are twinkling and he’s leaning so far forward that he barely makes contact with the edge of his seat, before adding, “You know . . . I was almost ready to do some stupid things!” 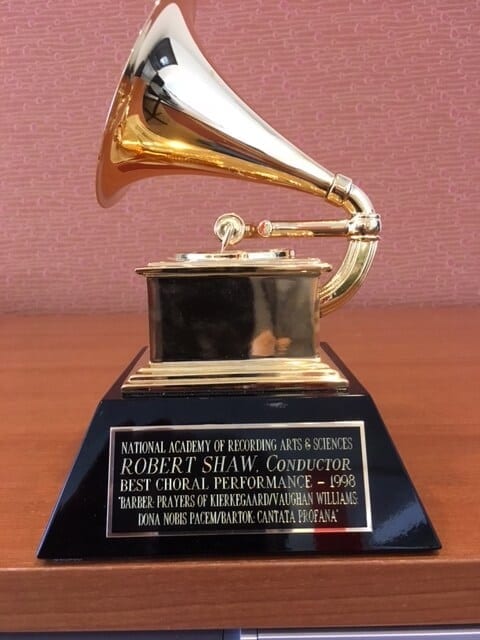 “Man, this is so frickin’ cool!” is how he sums up his real-time reaction to finding out that the big, black overcoat Thomas Shaw had draped over Scarr’s shoulders (to help ward off the cold as they rummaged through boxes of Robert Shaw’s possessions — including his 16 Grammy Awards — in a garage in Austin, Texas) had belonged to the maestro himself.

And his voice breaks then turns reverential when he remembers attending Shaw’s Christmas concerts and collaborations with student choirs from Morehouse and Spelman Colleges shortly after his relocation to Atlanta in 1966, at the height of the Civil Rights movement. “Ah man . . . ,” Scarr practically whispers in gratitude, his eyes pooling with tears, “It was like going to church!”

Scarr’s determination to recognize and document what he characterizes as “great contributions to mankind” is informed by his conviction that we must know our history if we want to move forward with any measure of intelligence and wisdom.

All of which, says Hogle, makes him regard his former protégé in a whole new light.

“One of Atlanta’s many great strengths is when individuals, some of whom never get any publicity or attention, see something that needs to happen and just get it done. Bob saw this need, believed it could be accomplished and got it done. He is a great role model.”