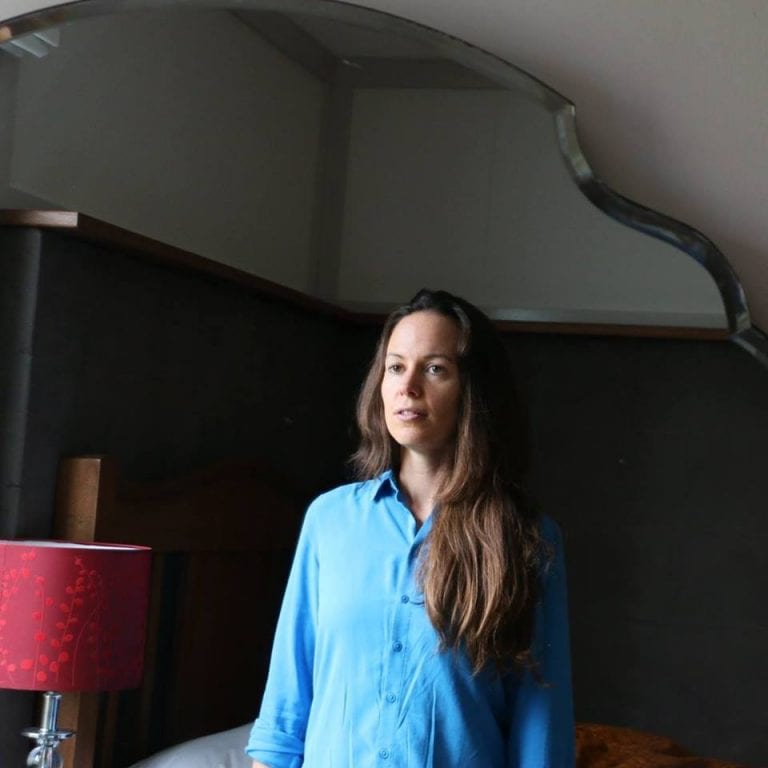 A day or two after my phone interview with Amber Boardman last week, I found myself hurriedly walking out the door of my apartment, doomed to be 10 minutes late for my next meeting, barefaced and wearing a wrinkled shirt. In the rearview on my way into the city, I noticed an absurd smeared pattern on my eyelid — nothing like some poorly applied mascara to bring you back to earth. Wiping it off while laughing at myself a bit and averting my eyes back to the road, I thought of Boardman’s upcoming exhibit at Sandler Hudson, Regrowth (September 8–October 14). It occurred to me that what makes Boardman’s works so wonderfully relatable is the immediate intimacy she establishes with her humor.

“To me, all of it is so silly,” Boardman divulged during our conversation. “It’s similar to the way that people use spray tans, and plastic surgery as an art medium.” These ritualistic daily self-improvements make up the majority of the focus of Boardman’s solo exhibition: a terrible perm, a dye job four months overdue for a touch-up (or “recession highlights” as my friend Allie Bashuk sometimes lovingly refers to it), running mascara. Through these absurd, borderline-grotesque portraits the artist not only establishes an immediate rapport with her viewer but makes a remark on societal pressures to attain the unattainable.

“I’m not trying to tell people what to do,” she says. “If you want to do anything, if it makes you feel better and you’re happier for it — go for it. But, from my own observations, I’m not convinced that’s generally the case. People aren’t happy with who they are in their natural state.” These insecurities are warped, amplified and inflated for effect in Boardman’s works. The absurdities are rooted in a capital-T truth that few would care to contemplate were it not through a humorous lens.

Mutating characters is something Boardman’s incredibly adept at — she’s been at it for years. “These are the same characters I used to sketch in my notebooks,” she discloses. “I just didn’t do anything with them.” What she did, instead, was teach herself animation and get a gig on Cartoon Network’s surrealist and loopy and heralded Squidbillies. “We had to make all of the tentacles grow and stretch in ways that are not normal,” she tells me. “In cartoon physics, if you can imagine it, it can happen, it can exist.”

Though it’s implicit now, her background is reflected in her canvases now, in the Medusa-like curls of the subjects of Stylist Vendetta or Resting Bitch Hair, for example, or the potato-faced blank stare of the subject in Pigment Problem. In his exhibition essay accompanying the works, Louis Corrigan (editor’s disclosure: Corrigan is a former board member to ArtsATL) describes Boardman’s characters as “amorphous” and “blobby,” — apt descriptors. “If there’s hair or clothing in my painting, it’s just an excuse for abstraction,” Boardman professes in our conversation. “Her work has a formal looseness often marked by visible brush strokes, vibrant juxtapositions of bold color, or blurring of figure and ground,” Corrigan adds in his essay. “There’s a dialogue between the figure as subject and the figure as simply something to hold together the play of paint.”

Dialogue, too, is something Boardman is equally as affixed with as she is beauty regimens. So with the release and announcement of her first exhibition of paintings came another – a series of conversations and one-on-one talks throughout the duration of the show. “Exhibitions have often felt one-sided to me,” she says in the statement. “I wanted to devise a way of having a more meaningful dialog within a community through an exhibition. I want to know what others are working on, and I also want to know how my ideas are being received. With deeper conversations about our practices perhaps we can catalyze in each other directions not previously explored. I believe exhibitions can be more meaningful and interactive than the traditional model of showing work.”

These conversations are free of charge and are simply scheduled 45-minute appointments to talk shop. It’s Boardman’s hope that participating artists will bring their portfolios along and in turn will spawn larger conversations about not only their creative works but about Atlanta’s arts community as a whole and the problems it faces. “I’m interested in offering my experience to them as a fellow artist, university lecturer, and Ph.D. student,” she says, adding that she hopes to offer her assistance in grant proposals, artist statements and other necessary tools of the trade.

An overarching sense of community and support is something Boardman has flourished within since moving to Sydney, Australia, in 2012 and something she hopes to foster here, though she recognizes the problems our community faces are something conversations can’t fix. “There’s a lot more support for the arts in Australia. There are so much more grants and prizes,” she tells me. “I mean, I was in a subsidized rent studio for a year. I’ve had two artist residencies. It’s such an expensive city to live in, but somehow life is easier there. You don’t have to work as much at the grind because there’s support there. You can be in the studio more.”

It’s the culmination of her experiences that have brought about this new approach and understanding of what an exhibition can be. “I still feel really invested in this community even though I only lived here 10 years ago,” she tells me. She recognizes the larger impact her 10 years in Atlanta have had on her. This is where she got her BFA from Georgia State University and first made a name for herself as an artist. But she recognizes, too, the merit of the time she spent in New York that followed, between 2009 and 2012. It was there that she grew to know the benefits of a healthy sense of competition. “When I was in New York I started a studio exhibition space where we talked about it a lot. I missed that very ambitious creative community when I moved to Sydney,” she says.

It’s not part of Boardman’s agenda to swoop in like a long-lost prodigal son to rescue Atlanta, though. “I hope to do a lot of listening,” she says. “I’m more interested in what other people want to talk about than my own agenda.”

Though these community-building exercises may seem completely unrelated to the body of work that will soon be hanging in Sandler Hudson’s exhibition space, the motivation behind them is the same. Boardman is affixed by humanity. It’s as readily apparent in the playfully peculiar characters she depicts on her canvases as it is in a conversation about art, or Atlanta or any number of conversations she’s sure to have.

Regrowth opens at Sandler Hudson on September 8, 7–9 p.m. An artist talk will be held on September 9 at 2 p.m., led by Louis Corrigan. The show runs through October 14.