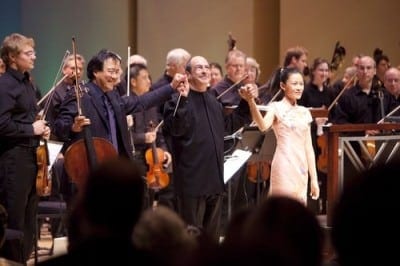 A decade ago, Ronald Reagan’s official biographer, Edmund Morris, published his well-researched account of the president’s life in a book called “Dutch.” It shocked a lot of readers, who expected the Pulitzer Prize-winning writer of “The Rise of Theodore Roosevelt” — a model of wise, even-handed political biography — to give Reagan the same treatment.

Instead, Morris went post-postmodern. Covering at least three degrees of self-referentiality, he inserted himself as a fictional character into Reagan’s youth as an on-the-scene observer.

The “Dutch” controversy came to mind Thursday in Symphony Hall, when the Atlanta Symphony played the world premiere of a cello concerto for Yo-Yo Ma that included the composer as narrator. Angel Lam’s “Awakening from a Disappearing Garden” could be called a concerto for narrator, cello and orchestra, although the premiere had the air of a first draft — too much extreme beauty and substance trying to escape an unwieldy post-postmodern structure.

Lam recited a brief, two-chapter short story (her own) that is integral to the concerto. Most unusual, that. It begins:

“I took a taxi. It wouldn’t take long to reach this luxurious mansion where I had been invited for a party. A calendar on the dashboard showed in bright red letters, May 10th, 1953. I asked the driver to circle the block again, spending more time, and then had him drop me off a block away. I left the taxi and walked some distance so that no one would see me coming by taxi, and not by limousine….”

It’s the start of chapter one — recalling a dream, accompanied by atmospheric music — and it takes just a few minutes for her to read. (Top photo.) But it makes the concerto feel lopsided. Lam has said that the narration was the creative source, but it holds disproportionate weight over the music that follows, which is sensationally interesting.

On the words “I said to myself, this is no fairy tale…everybody is watched and calculated” the harp strikes dark, psychologically ominous notes. Ma finally entered at the end of chapter one, on “Who am I?,” and launched a heart-thumping dream of his own, soaring high above or galloping with the orchestra at full stampede. The cello writing is mostly clean and the solo part is assertive and properly dominant while it plays. And although the whole concerto often seemed like unconnected episodes — was her narration supposed to glue it together? — they were each gorgeous, spiritual or tender, and many moments were deep and enriching, as if they came with a thousand-year back story. A small bell went Ting!, reminding us this was just a dream.

Where chapter one was musically eclectic (in a Pacific Rim/Californian kind of way), chapter two was decidedly Chinese, with traditional penatonic scales and Ma bending and sliding notes as if his cello was an erhu, a Chinese folk fiddle. The sonic template was spiced by Chinese percussion — tuned gongs, temple bells and distinctive Chinese Opera gongs that go boi-oi-oi-oing. At the very end — more self-referential performance art — the orchestra stands, looks into the audience and intones the words “Wei Wu.”

Musically, Angel Lam’s style draws from Chinese and Western classical sources, but her sound is utterly fresh — airy, emotional, stormy, somehow feminine, a little inarticulate but with urgent and abundant matters to express.

There’s sometimes a cinematic, pictorial feel to the concerto (a quality that is similar to the music of an older Sino-American composer, Tan Dun), as when her line “I felt like a guest of the Emperor” came with heavy imperial stomps from the orchestra. She’s a major talent in the making, and the sold-out Symphony Hall audience rewarded the composer and performers with a sustained standing ovation, bringing them out three times on sincere surges of affection. Lam received the loudest cheers.

What wasn’t clear was why the 29-year-old composer, who is a charming presence but lacks the skills of a trained actress or speaker, inserted herself in the middle of the performance of her own concerto. I recall Edmund Morris explaining that his unconventional literary technique was — I’m paraphrasing — his attempt to reconcile Reagan’s career accomplishments with the hollowness of the man himself; the fictional Morris could be paired with the youthful Ronnie to provide gravitas and soul. The biographer didn’t trust his ability to tell the story straight.

Likewise, with Lam’s concerto, one suspects that the composer didn’t trust her own musical voice and turned to an unconventional literary technique for aesthetic support. Or maybe she thinks her stories are on a par, creatively, with her music. Suffice it to say Lam’s dream-inspired text and her narration in a cello concerto felt entirely innovative, even as it doesn’t achieve its aims. In consultation with Ma and conductor Robert Spano, however, Lam’s first draft might yet turn into a masterpiece. All the piec
es are there — most essentially, the composer’s musical voice.

The 29-minute concerto was commissioned by Carnegie Hall for its “Ancient Paths Modern Voices: A Festival Celebrating Chinese Culture,” which opens Oct. 21. The ASO will perform the new concerto — along with the other work performed Thursday, Stravinsky’s opera “The Nightingale” — in New York November 7.

To learn more: Angel Lam’s site has her background information, her short stories (she hopes to get them published) and several compelling pieces of music to stream. On the Carnegie Hall site, check out her excellent “Empty Mountain, Spirit Rain,” composed for Yo-Yo Ma’s Silk Road Ensemble. Here’s an interview with Lam that ran as a concert preview in the AJC.

[Update 11/4: I wrote a brief profile of Angel Lam for MusicalAmerica.com. Lam is its New Artist of the Month.]

On to Stravinsky’s “The Nightingale.” James Alexander directed a semi-staged production of the wondrous 1914 opera, based on Hans Christian Andersen and set in fairy-tale China — where the Emperor’s ministers present him with the legendary songster, which he admires till the Japanese envoys offer an upgrade: a wind-up mechanical bird. It’s a very modern story, of man’s insensitivity to the environment, of our infatuation with technology for its own sake, and of our inevitable reliance on the natural world that which we once took for granted.

“The Nightingale” captures two shots of Stravinsky’s development. Act one was composed under the influence of his teacher, Rimsky-Korsakov, and the orchestrations are like the old man’s — exotic, colorful, cultivated. Then the Ballets Russes and “The Rite of Spring” intervened, and by the time Stravinsky returned to complete the opera, he’d revolutionized music. (Bottom photo: from left, the Emperor, the Nightingale, the Chamberlain, the Bonze and the Cook.)

Some conductors try to smooth out the differences to make the opera feel all of a piece. Spano emphasized the shocking changes more convincingly than any conductor I’ve ever heard. Act one dazzled with pictorial vividness; the conductor and orchestra played the Chinese March that opens act two as if it was a gentler version of “The Rite” — primal, aggressive, a riot (instead of a parade) of color and head-spinning images. Norman Mackenzie’s ASO Chamber Chorus continues its artistic growth and flexibility.

The cast was mostly excellent. Barefoot in a drab, nightingale-colored dress, Celena Shafer sang with bejeweled brilliance, nailing every note of the warbling coloratura and, something special, infusing the little thrush with poignant emotion. I like when you can track the nightingale’s personal growth across the evening.

The singers at court, too, were outstanding in their way. Soprano Jessica Rivera sang a plush-voiced Cook (she was last with the ASO as Kitty Oppenheimer in “Doctor Atomic”). Bass Denis Sedov as the Chamberlain, baritone Kostas Smoriginas as the Emperor and contralto Irina Tchistjakova as Death were at home with the thick, smeary Russian syllables — making this performance feel deluxe, as if it was playing to Carnegie Hall standards. Out of place was desiccated-voiced tenor Vinson Cole as the Fisherman.

Most of the action took place on a raised platform at the back of the stage — a configuration that put too much distance between audience and singers and cheated one of the best things about opera-in-concert: the singers are close and focusing their energy directly at you. At its best, Symphony Hall has a frustrating audience-stage disconnect. Why make this worse? (Last season, Alexander and the ASO used the same set-up to perform John Adams’ “Doctor Atomic.” It didn’t work then, either.)

Anyway, Alexander’s semi-staging was just for Atlanta. Fees for Carnegie Hall’s unionized stagehands are prohibitively expensive, according to an ASO insider, so its “Nightingale” will be sung in New York in a straight-ahead concert version, with no moving parts.

Update 10/20: Bloomberg News today reports on the Carnegie Hall stagehands: “After you practice for years and get to Carnegie Hall, it’s almost better to move music stands than actually play the piano,” the story says. “Only artistic director Clive Gillinson makes more than the stagehands.”