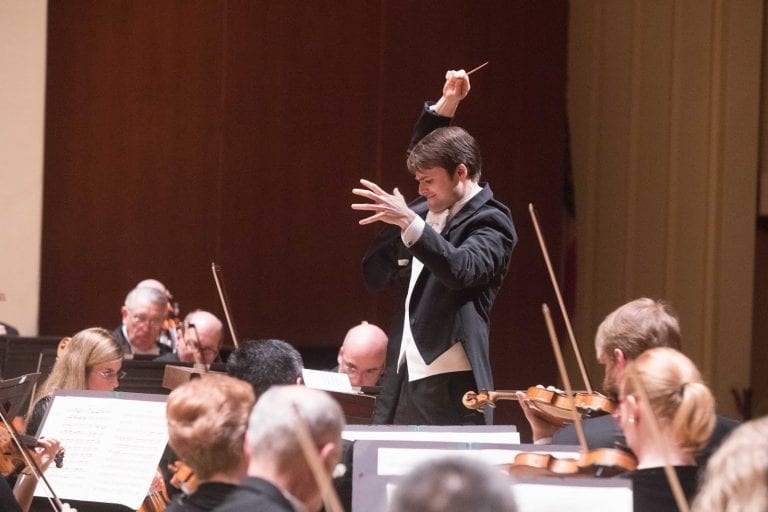 Part of Mulligan's job is to be ready to step in as conductor on a moment's notice, and he proved himself in his first complete subscription series shows with Robert Spano ill with bronchitis. (Photo by Jeff Roffman)

Classical Music Year in Review: How the ASO, Atlanta Opera and more shaped 2018

Endings, beginnings and a couple of centennials marked 2018 in Atlanta’s classical music scene. ArtsATL has curated a few of the highlights and game-changing events that shaped the course of this past year, helping propel the classical community into the new year with anticipation of what unexpected turning points might be in store.

It seemed as if the Earth shifted underfoot when Robert Spano announced plans to conclude his tenure as music director of the Atlanta Symphony Orchestra come 2021. While Atlanta still has Spano for a little while longer before he steps down, several other departures took place this year, including long-time principal cellist Christopher Rex and principal violist Reid Harris, who both settled into retirement earlier this year. We also brace ourselves to part with ASO vice president of artistic planning Evans Mirageas, who will leave at year’s end to become full-time artistic director of Cincinnati Opera.

But there is a beaming ray of light amongst all the rain. Just after Spano’s January announcement of leave, the ASO’s 30-year-old assistant conductor Stephen Mulligan stepped in halfway through a concert for the orchestra’s indisposed music director. Making his impromptu ASO subscription series debut, Mulligan was greeted by a favorable public response. He took the helm once again the following performance as acute bronchitis continued to plague Spano. Then, once again in early March, Mulligan stood in for an ill guest conductor, inciting the ASO’s trombone section to appropriately greet the young conductor with the theme from “Superman” as he ascended the podium mid-rehearsal.

Looming over 2018’s programs is the Leonard Bernstein birth centennial paired with a celebration of the music of Beethoven — which provided the overarching theme for the 2017–18 and 2018–19 seasons. Despite an unexpectedly disappointing production of Bernstein’s opera Candide, hampered by the inferior version of Hugh Wheeler’s book and other theatrical complications, the overall Bernstein/Beethoven theme for the arching pair of seasons proved successful.

Another important figure in the mix is Atlanta composer Michael Kurth, whose compositions were recorded by the ASO and Spano for a CD set to release in 2019. Notable among the releases was the March debut of Kurth’s “Miserere,” featuring mezzo-soprano Kelley O’Connor and the ASO Chamber Chorus.

Following the new season’s celebratory opener in fall, Spano headed to New York for a successful late-career debut with the Metropolitan Opera. Returning supercharged from the experience in mid-November, Spano led the ASO in a lively concert of music by Christopher Theofanidis and Tchaikovsky.

This year’s parade of fine guest conductors and soloists was plentiful. In particular, violinist Veronika Eberle’s ASO debut in early November pegged her as a fresh and on-fire soloist worth keeping an eye on in the new year and beyond.

As far as consistent in quality go, the Atlanta Opera nailed it with this year’s productions. Mainstage shows for the first half of the year featured a lighthearted Daughter of the Regiment, a playful but smoldering Carmen and the so-gruesome-it’s-fun Sweeney Todd. The latter of the year provided must-see productions of the classic American musical West Side Story. The production celebrated a double doozy of birth centennials, composer Leonard Bernstein and choreographer Jerome Robbins. Incorporating Robbins’ intensive original 1957 choreography into the company’s performances at Cobb Energy Centre was a memorable highlight.

Atlanta Opera made great strides to push forward the successful Discoveries series, which seeks to bring the opera to smaller venues across the city. With an emotionally powerful Holocaust drama, Out of Darkness: Two Remain in the spring, and the less compelling but conceptually interesting biopic bebop opera Charlie Parker’s Yardbird in early fall, the Discoveries series continued to expand its street credit for adventurous productions.

A TALE OF TWO PIANOS

Spivey Hall’s newest Hamburg Steinway concert grand piano, nicknamed “Robert,” made its public debut in January with a brilliant performance by pianist Kirill Gerstein, who returned later in the year to Symphony Hall as guest soloist for the ASO’s exciting season opener. Robert proved itself a worthy companion to Clara, the acoustically immaculate hall’s other esteemed Hamburg Steinway. The complementary pair provides Spivey’s visiting pianists a credible choice between instruments of equally high quality but enough difference in personality to suit different repertoire. In contrast to Gerstein’s choice, pianist Stephen Hough chose Clara for the qualities lent to Debussy’s “Images” in his November recital program, which also included the world premiere of his Piano Sonata No. 4.

Speaking of piano music, an increasing prominent delight in Atlanta’s chamber music scene are pieces crafted for two pianists, most notably by the duo of Julie Coucheron and Elizabeth Pridgen. The dynamic duo have mightily succeeded in bringing forth music for four-hand piano and two-piano duets to the forefront in various mixed chamber concerts throughout the city.

Exotic music, both ancient and modern, made waves this year by the Emory Gamelan Ensemble. The group has shown an increase in skill and tightness with several sparkling performances on a colorful array of traditional Indonesian instruments — thanks to workshops with Javanese gamelan master Darsono Hadiraharjo. In addition to time-tested traditional Javanese music, Emory Gamelan has added to its kit bag some engaging works composed by contemporary gamelan masters.

This year also provided new opportunities for Atlanta’s chamber music scene, who maintained steady grounds in traditional classical repertoire while continuing to explore territory in new works for small ensembles. Riverside Chamber Players and Peachtree String Quartet both included premieres in the programming mix of the year, but the highlight program was the ever-challenging Rapido! composition contest. Now in its fifth cycle, the Southeast regional semifinals were held in November at the Shakespeare Tavern Playhouse. The winner of 2018’s regional round, local composer Mason Johnston, will continue the competition to the national finals in the new year, held at the Hill Auditorium in January.

Everyone knows ATL loves a chance to get together, especially when it involves music. In April, the SoundNOW Festival brought a week of contemporary music downtown for a third consecutive year. The top highlight was percussionist Stuart Gerber’s impressive performance of the signature tour de force avant-garde work “Himmels-Tür” (“Heaven’s Door”), written especially for him by the late Karlheinz Stockhausen. The abstractly theatrical percussion piece involves a custom-built wooden door to serve as the musical instrument upon which Gerber’s character knocks, taps, thwacks and bangs with a burly pair of wooden sticks in his efforts to gain passage through.

Early this year, Gerber collaborated in an improvisational performance with synthesist Marc Fleury that was the final fling of Creative Music in the Hapeville concert series. Alas, the series shutdown was not the end of endings that would put a painful dent in the city’s already limited number of venues for impromptu musical exploration. A fire in March in south downtown left several art hubs no choice but to shut down, leaving the area’s creative venues including Eyedrum, Mammal Gallery and Murmur homeless.

Eyedrum moved its small but edgy experimental concerts to The Bakery, a new DIY creative space, until it can find a new space of its own. The Bakery itself has emerged as a hotbed for performers who thrive on both excogitation and improvisation, from the impish innovations of Klimchak to the dreamland soundscapes of Duet for Theremin and Lap Steel (Scott Burland and Frank Schultz) to a host of edgy rock-inspired groups.

In a similar spirit of emerging from the ashes, Bent Frequency once again embraced the crowd-engaged, anarchic aesthetic of Phil Kline’s “Unsilent Night” in December as an end of alt-Holiday joyful noise to celebrate the season.