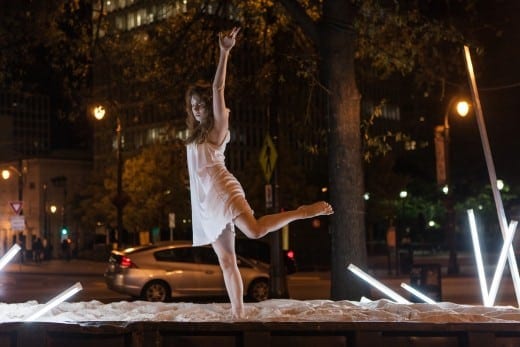 The City of Atlanta Mayor’s Office of Cultural Affairs’ annual Emerging Artist Awards exists to assist artists at a fragile stage of their career with both financial support and opportunities for exposure.

This year’s recipients — MaryGrace Phillips, Alex Gallo-Brown, Amina S. McIntyre and Meredith Kooi — will each receive a $1,500 grant and perform at the awards ceremony on Friday, 7-9 p.m. at Chastain Arts Center. The public is invited to meet the artists.

Dancer and choreographer MaryGrace Phillips will present a sound and movement work-in-progress inspired by honey. She is particularly interested in the idea of how something sweet can be the glue between two people, which she prefers to the idea of love binding one person to another.

“What if the reason two people were together was because it tasted the best?” Phillips asked. “The piece will use jazz music, because someone once told me that jazz is like pouring syrup into your ear.”

The 28-year-old Fayette County native teaches Pilates at various fitness studios in the morning, and fits in rehearsals in the afternoon and evening. She is a resident artist at WonderRoot, and recently performed an original piece for Atlanta’s ELEVATE program inside of a sand-filled dumpster.

“There are not a lot of dance venues for independent choreographers,” she said. “For people who are young and poor like me, we have to find places to create, like churches or dumpsters full of sand.”

Receiving the Emerging Artist Award is confirmation that Atlanta is the city where she should be working. “I feel noticed, affirmed and supported in Atlanta in a way that I don’t think I would in other cities, like New York. I’m encouraged by the dance community here.”

“It’s financially difficult to be a practicing artist here, but I’ve met a lot of great artists,” said Gallo-Brown, 30, who is a server for a catering company and tutors graduate students. “I’ve been more welcomed here than any other place I’ve lived,” he said.

He will read six of a series of poems about busy-ness, love, hatred and idleness, inspired by the expression “Atlanta is a city too busy to hate.” The statement originally referred to the civil rights movement, but Gallo-Brown focuses on the concept of busy-ness as a virtue.

“I was thinking about the idea of celebrating activity as opposed to reflection and forming relationships,” he says.

Gallo-Brown — who has been published on Salon.com and in the Los Angeles Review of Books, has self-published two books of poems called Relief and The Language of Grief.

Atlanta native Amina S. McIntyre will present an excerpt of a play-in-progress based on her experience as a teenager when her cousin was killed. After the trial, the family had the opportunity to give a recommendation to the court as to the punishment. The play is about a family trying to come to an agreement about whether to recommend the death penalty or not.

She is getting her master’s degree from the Candler School of Theology at Emory University and is a playwriting apprentice at Horizon Theatre Company.

“The process of creating art and discovering what you believe in is the same,” McIntyre said. “There is something inherently spiritual about creating.”

McIntyre is the Atlanta region’s “young ambassador” for the Dramatist’s Guild, helping to plan outreach and networking programs for local playwrights. She also works as a church secretary.

“Until you get to a place where your art and income meet up, you don’t sleep,” McIntyre said. “That’s why the Emerging Artists grant is so cool — because someone recognizes what it is like to be a working artist.”

Meredith Kooi is earning a Ph.D. in Emory’s Graduate Institute of the Liberal Arts studying art installations that use media such as sound or light. Kooi, who will present her own soundscape at the ceremony, also runs Radius, an experimental radio broadcast platform for sound art based in her hometown of Chicago.

The grant is especially welcome because, as a grad student, it is difficult to cover art expenses. “Since every exhibition or installation changes with each space, the equipment needed changes, so there’s no getting away from the up-front cost,” said 29-year-old Kooi, who will perform in Oakland Cemetery’s Cryptophonic Tour on May 2.

Like the others, she finds Atlanta a stimulating place. “There’s a lot of energy and great people in this city,” she said. “There’s still a lot of space to do things, and there’s something going on here every night.”